Ahhh… Fall is in the air. I LOVE Autumn, it’s my favorite season. Growing up in a tropical country where it’s 80+ degrees all year long, I’ve come to appreciate the changing seasons and I’m really looking forward to the cool, crisp weather.

It’s another week where we opted for home cinema viewing once again. The only movie that opened wide was the fourth Resident Evil movie which I never had any interest in seeing, and The Master hasn’t opened yet where I live. Fortunately, the three movies I saw were both excellent, reviews below.

Sunday night I re-watched one of my all-time Disney favorites, Sleeping Beauty. The plot is pretty thin but the visuals are so gorgeous! I still need to see the documentary Waking Sleeping Beauty that explores the art of modern animation and the stormy days of Disney’s animation house. Even 53 years later, amongst a plethora of other animated features, I think that it still stands as the most strikingly beautiful. Princess Aurora remains one of my favorite Disney princesses!

Anyway, here are my reviews:

I don’t know why it took me so long to finally saw this. My friend at work raved about it and lent me her DVD nearly a year ago. The premise about a rare atmospheric activity marked by the appearance of Aurora Borealis that somehow allowed a NYC firefighter Frank Sullivan to communicate with his son John 30 years in the future via a ham radio. Frank supposedly died in a warehouse fire, so John used the opportunity to warn his dad of his impending death, which was to happen the day after the two talked on the radio. Frank survived the fire and they’re overjoyed, but what they didn’t realize is that the alternate history also meant that a new set of events are triggered, including a horrific serial murders that affect the fate of Frank’s wife. So the father/son must work together to somehow change history again and hopefully prevent the murders from happening.

As with any time travel/alternate history movies, the logic behind the story is tough to grasp. I mean the film never really explained how the Aurora Borealis caused the radio reception to function in such a way, enabling the Father/Son to communicate 30 years apart. But hey, obviously the sci-fi fantasy element asks the viewer to simply accept that fact, so I was willing to go with it. The movie starts out being more of a drama, but the last third it becomes more of a thriller as the father/son worked together to catch the Nightingale killer, named for his penchant for killing nurses. The fact that John’s mother is a nurse—which ironically saves the killer at the hospital in the alternate universe—obviously made her a target. At times it felt like a procedural suspense drama, like an episode of Criminal Minds or CSI, but the father/son bond is what makes the whole thing intriguing. Shawn Doyle as the psychopath is undeniably creepy, relentlessly terrorizing both father/son in parallel timelines. 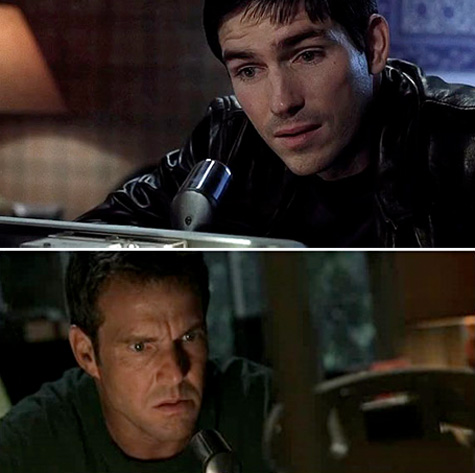 Frequency‘s strength definitely lies in the emotional bond between the father/son roles. Dennis Quaid as Frank and Jim Caviezel as John palpably displayed a heartfelt bond despite not sharing the screen together pretty much the entire movie. The first time they realized the identity on the other side of the radio, you immediately connect with these two characters and the love they have for each other. I love how the movie depicts such a loving family life, not just between father and son but also between Frank and his wife Jules (Elizabeth Mitchell). Andre Braugher as John’s partner in the force who’s been trying to solve the Nightingale murder case also gives a memorable performance.

It’s not a perfect movie by any means, in fact, there’s perhaps overly sentimental at times, down to the unbelievably happy ending. But overall, the performances of the leads are what made the movie work so well. It’s a sci-fi thriller that’s full or heart, and one that confirms me even more how underrated both Dennis Quaid and Jim Caviezel are. Caviezel in particular has this charismatic presence and that ‘quiet hero’ sensibilities about him that would make him a perfect candidate to portray Superman. I think he was considered by Bryan Singer at one point and I think he could pull off such a role [at times his looks and mannerism actually reminds me a bit of Christopher Reeve]. Obviously he has convincingly played humanity’s hero in The Passion of the Christ, a role that in a fair world should’ve nabbed him at least an Oscar nomination.

Frequency is definitely worth a watch for fans of time travel movies, or anyone who appreciates a heartfelt family drama with a twist. Fans of baseball might get a kick out of all the World Series facts used throughout the movie, at times it becomes a plot significance as well.

This independent Norwegian movie has definitely shot up to be one of my favorites of the year! I’m so glad I gave it a shot despite it being more violent and gory than I’m usually comfortable with.

Roger Brown (Aksel Hennie) is one of Norway’s most powerful headhunters. You’d think he makes pretty good money to live a good life, but if you want to live like a prince, then certainly one must pay for it. Roger lives an incredibly extravagant lifestyle: multi-million dollar house, top of the line Lexus and he could buy his beautiful wife Diana a 98,000 Krone (about $17K) earrings! The secret? Well he’s also an art thief, which is ironic since his wife is a gallery owner. With the help of his security guard friend Ove, Roger’s perfected his heist method, replacing the originals with forgeries which often goes undetected for years and the trails have gone cold.

It’s an interesting character study and Roger is definitely an intriguing individual. By self admittance, he realizes that he overcompensates his relatively short stature (5’6″) with an outward panache and marrying a tall, beautiful blond (Heidi-Klum lookalike Synnøve Macody Lund). He’s more in love with what the Diana represents than the woman herself, which explains why he hesitates to have a baby with her. He also has a mistress who’s much less glamorous than Diana, perhaps because internally, Roger feels inferior to his own wife.

Early in the film, the VO during one of Roger’s heist says that everything is fine until one gets caught. Well, unbeknownst to Roger, there’s apparently an even bigger danger lurking. The movie quickly gains momentum the moment Diana introduces her husband to a powerful man in the name of Clas Greve (Game of Thrones’ Nikolaj Coster-Waldau). A former elite soldier and former CEO of a surveillance company HOTE. It turns out Clas wants to be the CEO of HOTE’s competition, Pathfinder, which is a position that Roger happens to be recruiting. Clas soon becomes the target of Roger’s thieving plan, as Clas apparently inherits a rare Rubens painting worth close to a hundred million, along with his grandmother’s apartment. 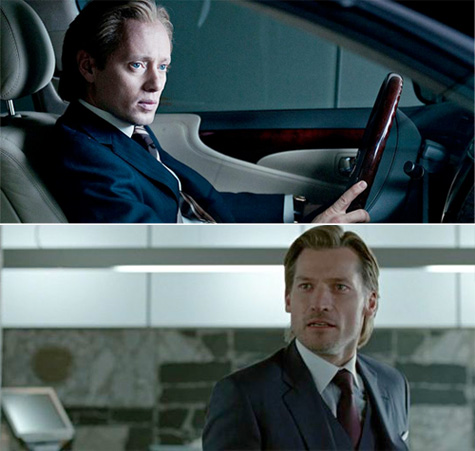 What happens next propels this movie into a relentless cat and mouse game beyond anything Roger could’ve imagined. It’s full throttle action that involves a brutal shootout, dog attack, car/tractor chase and a breathtaking accident involving a truck going in full speed! The action is quite vicious and relentless but none of it feels gratuitous to me as it moves the plot along. One particularly disgusting scene rivals the one in the Slumdog Millionaire (you’ll know which one it is when you watch it). Roger is in deep sh**, and I don’t just mean that figuratively speaking. Yet beneath all that bloody action sequences, the film is not without heart. There’s a conversation between Roger and his wife that’s particularly striking for its emotional honesty.

36-year-old Aksel Hennie carries the movie with aplomb. Initially he’s not a sympathetic character but he grows on you as the film progresses. The only actor I’m familiar with, Coster-Waldau, definitely fits the role of a charming but deadly former military guy who’ll do whatever it takes to get ahead. I picked the tall, gorgeous Danish as one of the actors I’d love to see as James Bond, and I stand by that pick after seeing him here. 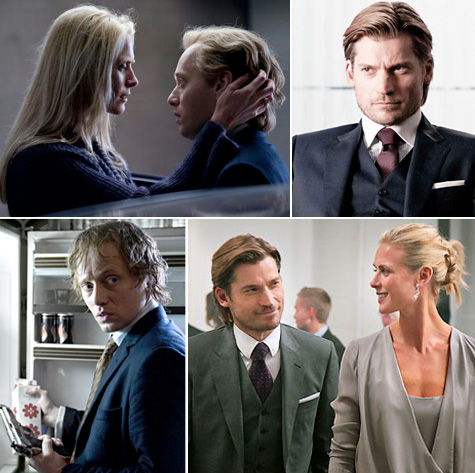 This is easily the smartest, most gripping thrillers I’ve seen in years. The acting is understated and the script, based on Norwegian author Jo Nesbø’s novel Hodejegerne (The Headhunters), is taut and unpredictable. I was at the edge of my seat the whole time and a few times I thought I knew where the story was going, but fortunately the movie still managed to surprise me. I’m not very familiar with Scandinavian cinema, but the stark minimalism packed with maximum efficiency is definitely a breath of fresh air.

There’s apparently a US remake in the works (surprise, surprise) as Mark Wahlberg was reportedly so impressed by this movie that he already bought the remake rights. Meh, I doubt it’ll ever live up to the original. So I advise you to watch this one instead before the US one comes out. Kudos to director Morten Tyldum who’s only made less than a half dozen feature films. This is what every thriller movie should be as it really was a thrill ride in more ways than one.

Thoughts on either one of these movies? Did you see anything good this weekend?