I heard about the premise of this one a few years ago when the project was still stuck in development hell and for some time it was meant to be a vehicle for Keanu Reeves. Well, now we’ve got two of the biggest young A-listers as leads, but what attracted me was still the premise of what could’ve been an intriguing psychological sci-fi thriller.

Well, if you have seen the trailer or tv spots, the studios pretty much marketed this as two passengers who’re stuck in a spacecraft traveling to a distant planet when they’re awakened 90 years early. Within 10 minutes of watching it, you’ll realize that isn’t quite the case. A giant asteroid hits a part of the spaceship, causing a malfunction that triggers Jim’s sleeping pod to open 90 years early. Apparently in the future we still age as we do today, so of course Jim is going to die of old age before he reaches his destination. The first 15 minutes or so are pretty entertaining when it was just Chris Pratt‘s Jim Preston all alone on the ship wondering why he’s the only one awaken on board. There are some funny moments, i.e. how it takes 50+ years for his SOS message to reach earth and the machine says ‘we apologize for the delay.’ Ha! It helps that Pratt has that aw-shucks likable charm that the film puts to good use, but he could only sustain it for so long before he’s starting to get on my nerves. 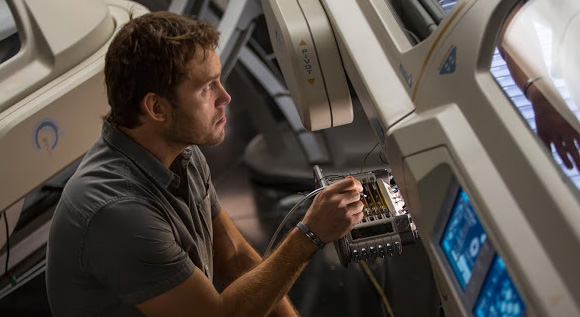 When does Jennifer Lawrence enter the picture, you ask? Well, to talk about it would spoil the premise, so I’ll discuss that later in the spoiler section. I could tell you that her character’s name is Aurora Lane. Heh, the Sleeping Beauty reference is just way on the nose it’s lazy. And is ‘Lane’ meant to be an homage to Lois Lane as Aurora is a writer? [shrug] Speaking of Lois, there is a space *walk* halfway through that evokes the flying sequence in the first Superman movie… and of course Alfonso Cuarón’s Gravity. In fact, Passengers made me recall so many other [read: better] sci-fi movies: 2001 Space Odyssey, Sunshine, Ex Machina, etc. but in a bad way because it could barely hold a candle to those films. Oscar-winner Lawrence herself doesn’t really get much to do in this movie. She’s pretty much reduced to a damsel in distress, one with questionable principles no less, by the end of the movie. 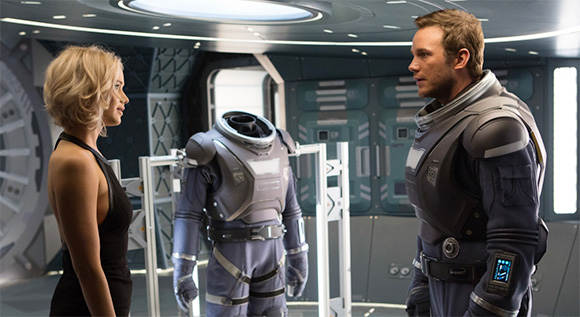 I have to admit the visuals of the movie, which is basically just the set design of the spacecraft Avalon, is stunning and sleek. It’s like a pristine, futuristic mega mall, complete with state-of-the-art rooms and all kinds of amenities such as bar, dance studio, swimming pools, etc. The special effects of the pool losing its artificial gravity whilst Aurora’s swimming in it is pretty cool to watch. But it’s to be expected from a movie with a $100+ mil budget, and this movie is pretty much all style no substance. Director Morten Tyldum (whose gone Hollywood since making the Danish indie film Headhunters) seems more concerned with the actors’ physicality/physiognomy than their psychology. In a dramatic moment where Aurora’s supposed to be feeling emotionally distressed, the director shows off her svelte physique in a snazzy bathing suit that tells you nothing of what she’s feeling. Apparently Jon Spaihts‘ script was from the coveted Black List, though you wouldn’t know it from the final result. 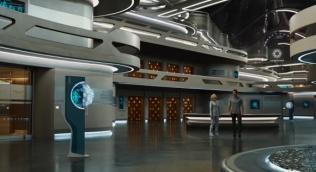 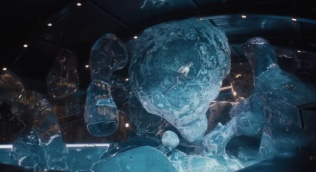 …
For a movie built on the romance of the characters, there’s zero emotional resonance here. Mostly it’s because most people wouldn’t be able to easily reconcile the fact that a bored, lonely man basically does something so selfless. Obsession is NOT true love, no matter how slick Hollywood tries to package the story nor how attractive the actors they hired to sell it. SPOILER ALERT (highlight to read): At one point Aurora calls Jim a murderer for waking her up to keep him company, and that description is absolutely justified. There’s no denying that Jim basically stalks Aurora in her pod, then proceeds to rob her out of her future and deceives her into falling for him. No matter how you look at it, he’s a creepy dude who doesn’t deserve our sympathies, yet the filmmakers want us to root for him.

Aside from the unethical decision of the protagonist, it’s hard to root for either of them as we just barely knew them. No character development than mere superficial hints of their professions prior to their space journey. There’s also no real threat for any of the characters, even at the most dire scenario when all hell broke lose in the spaceship. Don’t even get me started with the bombastic finale. The mechanical failures in the ship feels like a cop out plot to avoid facing the morality of the story, while also conveniently give the protagonist a ‘get out of jail’ free pass. As for the rapport between the two leads, well they may seem like buddies in interviews, but there’s no chemistry between them as a couple. The hyped-up sex scene is pretty lame and I never believed them for a second as two people falling in love.

Well, I’ve described this movie in the worst possible way and I actually like it less the more I think about it. The only bright spot here is Michael Sheen as the android bartender, but he’s barely around often enough and his talents is wasted on this role. It’s also nice to see Laurence Fishburne popped up briefly, though his appearance can be considered a cameo. He did have one memorable line in the film delivered the only way he could, which only vexed me that he’s not around longer.

There’s really not much to recommend this movie. But the biggest disappointment of Passengers for me is that there’s an intriguing story here buried under studios’ meddling. It has the potential to be a haunting sci-fi that makes us ponder on our humanity, but all the thought-provoking bits gets swept under the rug [or more appropriately here, thrown out to space] in lieu of a generic space action adventure. No amount of star power can save a flawed script, pair that with studio meddling and you’ve got yourself a real cinematic misfire.

Have you seen Passengers? Well, what did you think?