Two and a half months away until Skyfall arrives so the countdown continues. This time my pal Ted and I set our sights to the Bond girls! They’re as essential to a Bond movie as his Walter PPK, and they have quite an enduring appeal. Once a Bond girl, always a Bond girl. I subscribe to IN STYLE magazine and within the 600+ pages of the September issue is a segment on guess what, Bond girls!! It marks the occasion of the 50th anniversary of the first Bond film, Dr. No. I like the intro they wrote:

It’s the most exclusive sorority in the world — a sisterhood of desire, bikinis and deadly weapons.

I also saw this amazing info-graphic created by CableTV.com that shows every single Bond girls from the 23 Bond movies, yes including Skyfall.

Well, not every Bond girl is cut from the same cloth however, so here’s our picks of the best and worst from Connery all the way to Daniel Craig [we purposely skip George Lazenby’s single Bond movie On Her Majesty’s Secret Service]. I do think that Diana Rigg as the ONLY Bond girl that the playboy super-spy married would belong in the BEST list.

It’s a challenge to choose the best and worst Bond girls from all of Connery’s films, but I believe many people will agree with my choices.

Best: Ursula Andress as Honey Ryder in Dr. No – the scene where she emerged out of the beach is still the best intro to a beautiful woman ever filmed. I instantly fell in love with her as a young teenager and maybe it’s the reason why I tend to date blonde ladies with curves 🙂 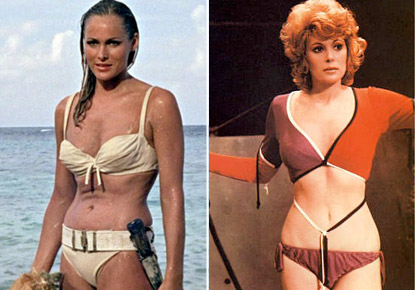 Worst: Jill St. John as Tiffany Case in Diamonds Are Forever – In my opinion this was one of the worst Bond films ever produced and it has probably the worst Bond girl in Jill St. John. Her is a perfect example of damsel in distress, even she spent most of the movie in a bikini, I just found her character annoying.

Let’s face it most of Moore’s Bond films were pretty dreadful but many of the Bond girls were quite beautiful.

Best: Jane Seymore as Solitaire in Live and Let Die – The first time I saw this film and her character appeared on screen, I thought she’s the most beautiful woman I’ve ever seen. I think she’s only the reason why I can watch this Bond flick again and again. This was one of the worst Bond films ever made. 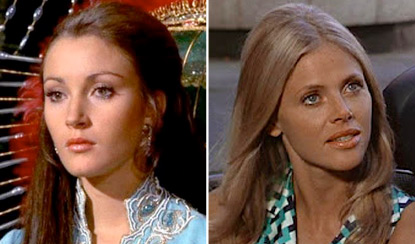 Worst: Britt Ekland as Mary Goodnight in The Man with the Golden Gun – Another bad Bond flick, unfortunately it also have one of the worst Bond girls. Ekland’s character is another damsel in distress and not much else.

He’s only done two Bond films so this one was easy to choose.

Best: Carey Lowell as Pam Bouvier in License to Kill – She’s a sexy lady who can fire a shotgun and flies an airplane. With her long legs and beautiful eyes, yeah I’m in love with her. 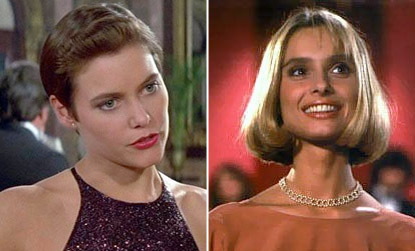 Worst: Maryam d’Abo as Kara Milovy in The Living Daylights – I hate to keep repeating myself but again her character is another damsel in distress and not much else.

He starred in four Bond films, two good ones and two very bad ones.

Best: Izabella Scorupco as Natalya Simonova in GoldenEye – I think her character is more of a sidekick to Bond than just another eye candy. She actually helped Bond get out of trouble in some tight spots. 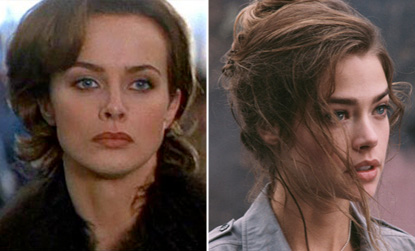 He’s the current Bond and so far we’ve only seen two of his films but here are my best and worst.

Best: Olga Kurylenko as Camille in Quantum of Solace – I’m sure many people would’ve gone with Eva Green in Casino Royale but I like Olga better. She and Bond had the same agenda and will do whatever it takes to get it. I really dug the scene where she told Bond what happened to her family and then Bond apologized to her for messing up her attempt at killing General Medrano. 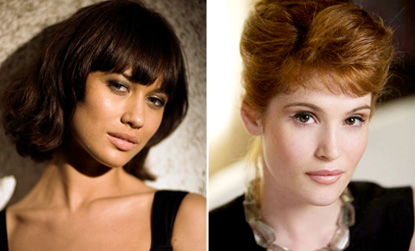 Worst: Gemma Arterton as Strawberry Fields in Quantum of Solace – I don’t even know why the filmmakers decided to include her in the film, she served no purpose whatsoever to the story. Maybe halfway through filming, they realized they only have one pretty girl so they had bring in another one just to please the audience.

I have to confess that my memory of Connery’s Bond films are a bit hazy, and I had just seen Dr. No for the first time recently.

Best: Honor Blackman as Pussy Galore in Goldfinger – Not only does she have THE most memorable name in the history of Bond girls, she also has one of the best introduction. Bond’s response “I must be dreaming,” always makes me laugh, I mean it’s just perfect! She’s also a pilot and knows Judo, and though there are hints that miss Galore is gay, Honor Blackman said in the Bond Girls Are Forever documentary that she played the role as if she had been abused in the past. 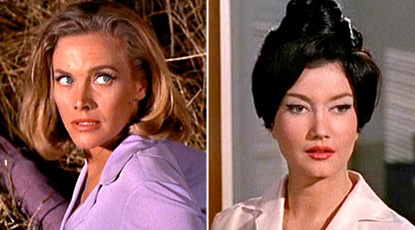 Worst: Zena Marshall as Miss Taro in Dr. No – Since I just saw this recently, it’s still fresh in my mind. I can’t stand it when Hollywood used to employ Caucasian actress to play an ethnic character. In this case she’s supposed to be a Chinese girl and Zena was made up with heavy eyeliner to make her eyes appear smaller [roll eyes] On top of it, her character is just lame. I’m glad Bond girls have come a long way since then, well most of the time anyway.

I grew up watching Moore’s Bond films so I remember them fondly. Though I prefer the grittier Bond like Dalton and Craig, Moore’s Bond flicks are guilty pleasures for me. They’re preposterous fun!

Best: Maud Adams as Octopussy in Octopussy – The film is kind of a guilty pleasure of mine, but I really like seeing a Bond girl not only get the title role but she’s also a powerful business woman who’s beautiful as well as shrewd. Swedish-born Adams is the only Bond girl (besides Eunice Gayson as ‘Trench, Sylvia Trench’) who appears in two Bond films. I quite like the way she speaks, sounds seductive and elegant, without sounding like a bimbo. 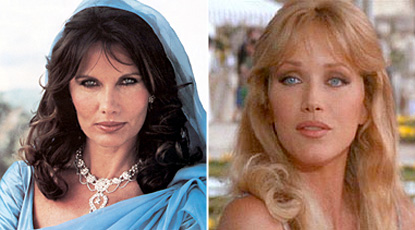 Worst: Tanya Roberts as Stacey Sutton in A View To a Kill – For a geologist, Stacey just doesn’t seem that bright to me and unlike Maud, the girlish way Tanya talks annoys the heck out of me. It’s a terribly-written Bond flick to begin with, and having her as the Bond girl certainly doesn’t help matters. She doesn’t seem able to do single darn thing without Bond’s help!
…

My favorite Bond somehow got a bad rap for being way ahead of its time… and also for being the least promiscuous of them all [in the 007 universe apparently it’s a bad thing] as the film comes out in the age of AIDS and safe sex.

Best: Carey Lowell as Pam Bouvier in License to Kill – I like her spunk and as a CIA agent, she definitely doesn’t need Bond’s help to take care of the bad guys. I like the fact that Bouvier has her hair cut short when Bond hints that she needs a makeover. She looks sexy and in control in that sparkling dress and bright red lipstick, no wonder Bond did a double take when he saw her!

Special Honorable Mention: Talisa Soto as Lupi in License to Kill. As the girlfriend of Bond villain Sanchez, no doubt Lupi is pretty much just there for eye candy. But I think she’s quite memorable and she definitely looks stunning in that red lace dress at the casino. 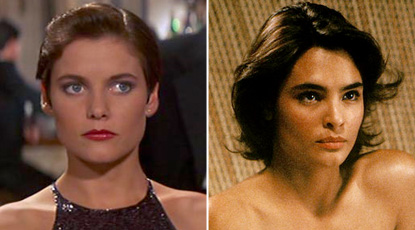 Worst: None. Controversial I know but I quite like ALL of Dalton’s Bond girls.

I know people don’t like Maryam d’Abo as Kara Milovy in The Living Daylights, but to her credit, I don’t think she’s as much a weak Bond girl as people think. The more I watch this movie the more I grow fond of her, yes even her delirious cooing to Bond “You were fantastic. We’re free!” to which Bond replied, “Kara, we’re inside a Russian airbase in the middle of Afghanistan!” But then she redeemed herself and proves her mettle when she’s left behind with the Mujahideen, fighting her way to finally get into the plane with Bond. I also like that she’s the only Bond girl who actually has a legitimate career as a concert cellist.
…

I enjoyed the first two of his Bond flicks, but the last two leave much to be desired. Now that I think about it, I’m not too keen on Brosnan’s style as Bond either. He’s just way too smug for his own good, but he does have some terrific Bond girls cast in his movies.

Best: Sophie Marceau and Michelle Yeoh (tie). I can’t pick which one I like best between these two. I like Sophie’s elegance and her background as an heiress who falls for her kidnapper is quite intriguing. The film is crap yes, but I have a soft spot for Sophie as a Bond girl. Michelle is one of those tough girl who could practically kill Bond with her martial arts skill. I like her earlier chase scenes between her and Bond in Carver’s secret lab in Hamburg, Germany. 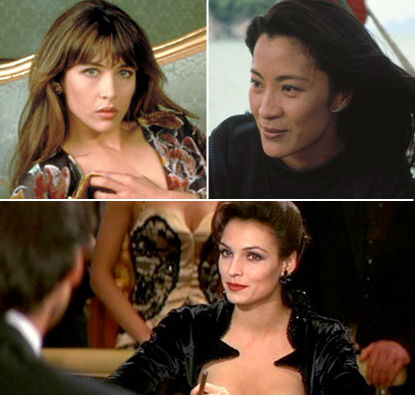 Special Honorable Mention: Famke Janssen as Xenia Onnatop in Goldeneye. She’s more of a Bond villainness but I think she deserves a mention as who could forget the cigar-smokin’ beauty with killer thighs? I’ve always liked Famke, especially as Dr. Jean Grey in the X-Men movies. I can’t believe she’s now relegated to a damsel-in-distress role as Bryan Mills’ ex-wife in Taken, you’d think after such a bad-ass role she could almost get a role as a female superspy!

Worst: Denise Richards as Dr. Christmas Jones in The World Is Not Enough – Even with our ‘suspension of disbelief’ radar turned on at full force, it’s still hard to take in someone who looks and talks like Denise Richards, dressed in tank top and short shorts, as anything requiring an advanced degree, let alone a nuclear scientist!! Plus, Bond’s quip at the end about ‘Christmas only comes once a year’ is just sooo cringe-worthy! 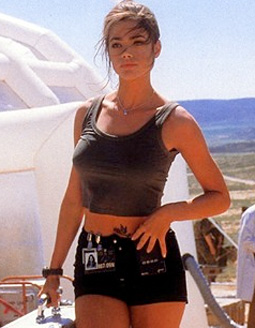 Though Craig’s only got two movies so far, but one of his Bond girls has become one of my favorites Bond girls of all time. We’ll see how Naomie Harris and Bérénice Marlohe would fare when Skyfall is released.

Best: Eva Green as Vesper Lynd in Casino Royale – I just love her from the moment she appeared on the train to Montenegro. Her banter with Bond is one of my all-time favorite scenes, and not just from a Bond movie. Vesper is no bimbo, but she’s also more than meets the eye. Eva plays Vesper in such a bewitching way that it’s easy to see why even someone like Bond who could have any woman he wanted would give it all up just for her. 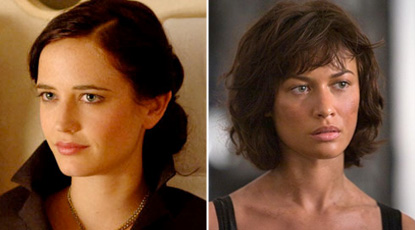 Worst: Olga Kurylenko as Camille in Quantum of Solace – Sorry Ted but I just don’t like this movie and though Olga is beautiful, she makes for a boring Bond girl to me. Yes she’s got her own personal vendetta so she has no time to make love with Bond, and that’s completely fine by me, yet she just isn’t a charismatic character. It’s not her fault though, I think the film is just poorly-written.

…
Well that’s our list. I’m sure every Bond fan has their own pick of best and worst Bond girls, so let’s hear it!

63 thoughts on “007 Chatter: Best and Worst Bond girls of each Bond actor”