Woo hoo!! I’m so glad there’s such a thing as a TCM anniversary events that allow people like me who miss out on soooo many classic films to actually enjoy them the way it’s meant to be… on the big screen!

Thanks to my pal Michael of It Rains… You Get Wet blog who first told me about this TCM event a few months ago, hence I got to see Casablanca at the cinema too and it was marvelous. My appreciation post for it is overdue I know, but it will happen, so stay tuned 😀

I have seen this iconic shot soooo many times, and as a fan of scenes in the rain, surely this one would’ve made it to that list had I seen it before. But the truth is, I don’t know hardly anything about this movie, I didn’t even know that Gene Kelly not only starred in it but he co-directed it with Stanley Donen! I also didn’t know that Debbie Reynolds was only 19 when she made this film. The premise about transition in Hollywood from silent to ‘talkie’ films is a bit reminiscent of The Artist. It’s one of those topics that always fascinates me, and making it a musical parody is just brilliant!

One major complaint I have with these TCM screenings is that they assume everyone has seen the movie! So they put the very revealing interviews, clips, etc. IN FRONT of the film instead of after! They did that with Casablanca too, but I noticed on IMDb’s page forum that someone had the exact same complaint about spoiling the movie to those who haven’t seen it! I hope TCM would fix that for future screenings and run the interview segments afterward!

So does it live up to being American Film Institute (AFI)’s #1 Movie Musical of all time?

I’d say so. The song and dance sequences were absolutely wonderful to watch! I quite like musicals and have seen a number of them, from classics like My Fair Lady and The Sound of Music, to contemporary ones like Moulin Rouge! and Chicago. I could see why this tops them all. Gene Kelly and Donald O’Connor were superb, I mean they were truly the best in the business, the whole time I saw them dance I kept thinking, ‘how in the heck did they do that??’ It’s mind-boggling the kind of energy they put into these sequences and of course, the technical aspects such as footwork, doing somersault, etc. are spectacular. Gene Kelly’s jubilant singin’ in the rain sequence is marvelously iconic, definitely deserves a spot on my favorite scenes in the rain list!

I’m also impressed with Debbie Reynolds who did not know how to dance before the film began, but wow her gymnastic background certainly helped pulled it off as I thought she was brilliant. Read on below as to who helped her with dancing tips, no it’s not really her co-star.

Now, story-wise it’s pretty cute. It’s predictable really, but then you don’t watch these movies for the plot. There were some really cheesy sequences and some went on way too long, I cringed during the scene where Don wooed Kathy in that empty stage, complete with fake moonlight and giant fan for wind-blown effect, ahah. It was just too corny and silly, but I guess it’s a small quibble in the grand scheme of things.

Oh I have to mention the wonderful Jean Hagen as the diva with the high-pitched voice Lina Lamont! She’s such a great comic relief in this movie, the way she was pining for Don because she believed the tabloid stories is hilarious. But the funniest part was the whole mic fiasco as the filmmaker and cast attempt to film their first talking sequence. I was in stitches throughout that whole scene seeing the frustrated director responding to the dumb but defiant actress simply unable to take his direction! I call her Lina Lament as she made everybody suffer, ahah. 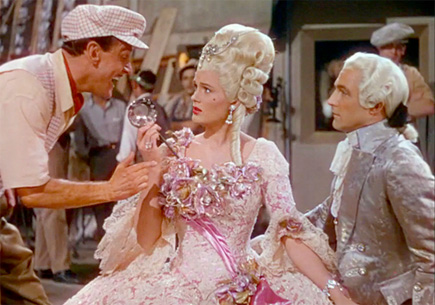 Anyway, I read up about the movie shortly before going to see it, and there were some fascinating trivia. Here are some of them from Wikipedia and IMDb:

• In the famous dance routine in which Gene Kelly sings the title song while twirling an umbrella, splashing through puddles and getting soaked to the skin, Kelly was sick with a 103 °F (39 °C) fever at the time. The rain in the scene caused Kelly’s wool suit to shrink during filming. A common myth is that Kelly managed to perform the entire song in one take, thanks to cameras placed at predetermined locations. However this was not the case as the filming of the sequence took place over 2–3 days.

• Debbie Reynolds was not a dancer at the time she made Singin’ in the Rain — her background was as a gymnast. Kelly apparently insulted her for her lack of dance experience, upsetting her. Fred Astaire was hanging around the studio and found Reynolds crying under a piano. Hearing what had happened, Astaire volunteered to help her with her dancing. Kelly later admitted that he had not been kind to Reynolds and was surprised that she was still willing to talk to him afterwards. 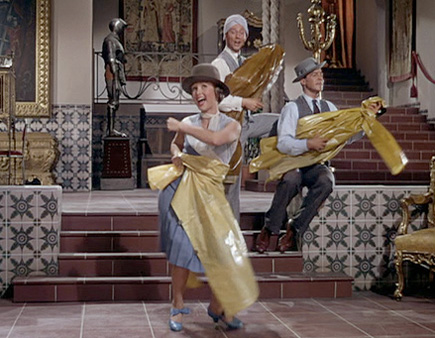 • For the Make Em Laugh number, Gene Kelly asked Donald O’Connor to revive a trick he had done as a young dancer, running up a wall and completing a somersault. The number was so physically taxing that O’Connor, who smoked four packs of cigarettes a day at the time, went to bed (or may have been hospitalized, depending on the source) for a week after its completion, suffering from exhaustion and painful carpet burns. Unfortunately, an accident ruined all of the initial footage, so after a brief rest, O’Connor, ever the professional, agreed to do the difficult number all over again.

This scene is just fabulous and sure to bring a smile to your face no matter how bad your day goes. Bravo Mr. O’Connor!
…

What did you think of this movie folks? Anybody else seeing this on the first time on the big screen?

60 thoughts on “What a glorious feeling! Musings on Singin’ in the Rain”