I’ve got a day off today which is always nice. Well, I skipped the cinema again today as there just isn’t anything worth spending $10 bucks for. So on Friday night my hubby and I opted to finally open our THOR Blu-ray disc and re-watch it. As I’m anticipating The Avengers this coming May, we might re-watch the individual Marvel superhero movies before that, and THOR has not one but two of The Avengers‘ major players… the god of thunder himself AND the group’s nemesis, Loki.

This is the third time we watched THOR as we saw this twice on the big screen and I still love it. I must say I REALLY enjoy watching Tom Hiddleston more and more as Loki and am thankful to Kenneth Branagh for choosing him as the villain. I could see how at the end of this film Loki has become so disillusioned with who he is and his place alongside his brother… he already had such a major identity crisis in the beginning and by the end of it, Thor’s return to Asgaard will finally push him into a full-blown sinister villain hellbent on revenge and destruction. So yeah, Thor definitely earns its place amongst my Top Ten Favorite of 2011, check out my full review. 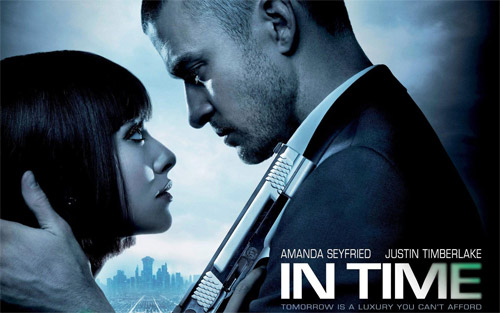 Most of the time, I watched movies because of the cast but this one is one I actually watch despite of it. What appeals to me most about this movie is the sci-fi concept of time as means of life force AND currency. Set in an unspecified period of the future, people stop aging at the age of 25 but are engineered to live only one more year, that is unless they have the means to buy their way out of that situation to have a shot at immortal youth.

The protagonist is Will Salas (Justin Timberlake) who lives in a ghetto-like society where people are constantly dying as they literally run out of time. Everyone has a ‘digital body clock’ in their arm that tells them exactly how much time they have left down to the last second. Coffee costs four minutes of their life and a bus ride is about 1 hour or two. It’s a fascinating concept to see people pay and getting paid in their jobs by scanning their arm into a certain device that would deduct or put the number of hours. Unlike blood transfusion that would mostly have to be done at a medical location, people can transfer their life force in a matter of seconds in this futuristic world as all they have to do is put their arms together and the hours/minutes is transfered immediately. 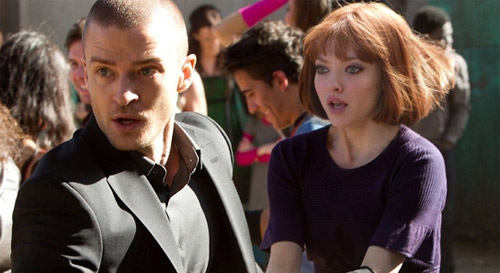 Tragedy hits Will at the beginning of the film when his 50-something mother (Olivia Wilde) ran out of time on the way of meeting him. Wilde is actually younger than the 31-year-old Timberlake by 3 years in real life but that is ok as she looked about 25 in this film. It’s even more devastating as Wil just inherited over a hundred years from a stranger he saved from a bar, a 105-year-old Henry Hamilton (Matt Bomer) who’s burned out of living forever. It’s not exactly clear how Henry obtained that enormous amount of life force however, but he ended up transferring most of his life force to Will with only minutes left for him to commit suicide by the bridge.

Will then moves to a different ‘time zone’ New Greenwich, a city where the upper class live and the millionaires here have hundreds and even millions of years to their time to live as they please. It’s eerie to see that everyone is so young, Phillipe Weis, a time-loaning business tycoon introduce his mother in-law, his wife and daughter to Will and they all look merely a couple of years apart. The 90-year old Phillipe himself looks barely old enough to be a college freshman. 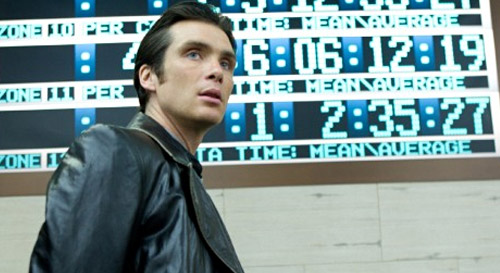 Will ends up being on the run as the Timekeepers (led by Cillian Murphy) think Will killed Henry and stole his time. But just before he is arrested, he managed to kidnap the Phillipe’s beautiful daughter Sylvia and the two runs off together in Will’s newly-acquired fast luxury car. Will is hellbent on fighting against the injustice of the system and against the ‘for one to live forever, few must die’ philosophy of the rich, fostered by billionaires like Weis. The rebellious Sylvia is more than happy to trail along with Will as the two become lovers on the run.

Whilst the whole thing is quite a novelty idea, there are tons of issues that keep this from being a great film. For one, the storyline is quite predictable. In many occasions I could predict what’s about to happen next. The high-paced action and car chases are fun to watch but there’s no sense of real danger to the protagonists and apart from the scene between Will and his mother, the elements of surprise is almost non-existent throughout. The set pieces are quite nice however, I especially like how the vintage-futuristic cars, if there is such a thing… they have futuristic elements but the design is made to look like 60s/70s automobiles.

Now, let’s talk about the casting. I’ve always thought that Timberlake has talents but not exactly a capable leading man material. He was good in The Social Network but it was more of a supporting role and he simply had to rely on his charm and confidence to make it work. In this one, he’s serviceable and even sympathetic at times, but lacks a certain depth that would make his character someone we could truly connect with. I think Seyfried is a promising young actress, she’s definitely got on-screen charisma, but she’s not given much to do but look alluring in a short dress and sky-high heels. Props also for her ability to outrun the police in those stilettos, not to mention keeping her perfect bob always looking so smooth and bouncy. They make a nice looking couple but neither have the edge to make me think they’ve got it in them to be society’s ‘savior’ who steal from the rich on behalf of the poor. In fact, they seems to be a clumsy amalgam of Robin Hood + Romeo & Juliet + Bonnie & Clyde.

Director Andrew Niccol (Gattaca, S1m0ne) seem to have a penchant for ridiculously beautiful people. This film is chock full of them! In fact, Timberlake seems to be the only the more ‘normal’ looking one amongst supermodel-types like Seyfried, Matt Bomer, Alex Pettyfer and Olivia Wilde. Now, I’m probably the only one who’d notice this, but even Sylvia’s bodyguard is played by a the gorgeous Ethan Peck, the grandson of my beloved Gregory who obviously has the tall, dark with a deep voice genes on his side. Perhaps the director is trying to emphasize the ‘fountain of youth’ aspect of the story but I feel like the gorgeous cast actually becomes a distraction instead of serving the story.

The massively-talented Cillian Murphy with killer blue eyes is always watchable as the chief of the Timekeepers, but I don’t think his talent was fully utilized here. When I first saw the trailer, I actually thought what this movie would look like with Cillian as the lead and how a capable director Christopher Nolan or Ridley Scott could take this fascinating time-based currency concept to new heights.

As I’ve said above, this movie is worth a watch largely because of the fascinating concept. I probably wouldn’t even rent it if I weren’t a big fan of this kind of sci-fi films. Thankfully, despite the flaws, it’s not a complete waste of time either, which would be ironic indeed 🙂

So what did you watch this weekend, folks? If you’ve seen this movie, I’d love to hear what you think.

40 thoughts on “Weekend Roundup: THOR rewatch and IN TIME review”