Given the breather for the last fainting gasps of summer. Adapting to a wrist brace due to a late furniture move. And given time top ponder, roam, root around, unearth and play with one of the great concepts, mysteries and axioms of cinema. Its mystique and long time purveyors. Every film career has to start somewhere. Creating fodder for many night long discussions amongst those who take cinema seriously. Clint Eastwood, Jack Nicholson and Gene Hackman all got their starts in less than stellar, nor top of the line, B-Movies. As did Scott Glenn, Kevin Costner and Jennifer Aniston. And occasionally. Usually, once in a generation. A film comes along that introduces a sizable number of talents to swing for the fences. Or crash and burn.

My generation had The Magnificent Seven and Bonnie and Clyde. While later contenders could easily include M*A*S*H*, The Big Chill, The King of New York and The Usual Suspects. Which sent me digging even deeper. Back to a film that came and went within its prescribed two weeks. Made a respectable return on its medium sized investment. While bring ignored or completely misunderstood by elitist critics. And offered some intriguing first glimpses into a decent handful of today’s heaviest hitting talent. 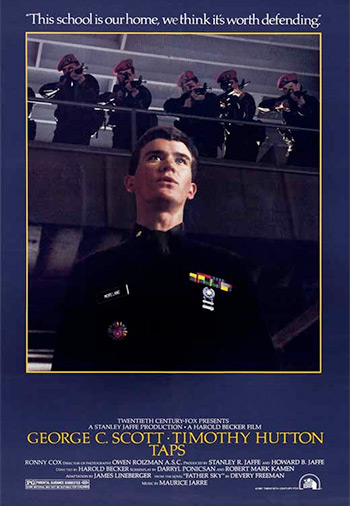 Which begins on a warm early summer afternoon with Valley Forge Military Academy filling in for Military Academy Bunker Hill outside Philadelphia, Pa. It’s tall stone, brick and concrete walls enclosing many stoic and storied dormitories and barracks. And that years’ graduating class is going through last minute inspections and repairs to full dress uniforms. Sashes, sabers, epaulets and all as they prepare for their graduation parade and soiree.

Cadet Captains Alex Dwyer (Sean Penn) and J.C. Pierce (Giancarlo Esposito) trade fantasies about future sexual exploits that see a bit raunchy. Cadet Captain Brian Moreland (Timothy Hutton), every inch a leader goes over his gleaming low quarters and checks his gig line for a meeting with the Commandant. Retired Brigadier General Harlan Bache (George C. Scott). While up the stairs and down the hall the Drill Team and Honor Guard march behind Cadet Captain David Shawn (Tom Cruise channeling Marine Colonel Lewis B. “Chesty” Puller from his Silent Drill Team days. Chest thrust out. Ramrod straight with an unblinking determined gaze). Prior to heading off to the prom’s Receiving Line.

Captain Moreland’s meeting with the Commandant fares both well and bad. With General Bache promoting Moreland to Cadet Major. Then informs him that the Academy’s Board of Trustees will be selling the school and its land to real estate developers. With a year before the deal is done and the Academy will be deactivated. That’s year’s Seniors and the following year are in the clear. Though those under classes will have to fend for themselves find other schools to matriculate.

A wet blanket to be sure. As the two finish their brandies. Bache removes the magazine from his Colt Commander .45. Holsters it. Adjusts its belt and Moreland leads off to the festivities. That are fine well into the night. Until some local “townies” decide to crash it and hurry things along. A fight ensues. Bache draws his weapon, but it is taken during the fight. It goes off in the hands of a townie that kills another townie. Bache falls victim to a heart attack after he is arrested. And all Hell nearly breaks loose.

The Cadets and the cops intervene as Bache is taken away in cuffs. The townies start screaming to the Board of Trustees and local and state cops. While Major Moreland confers his upper cadre. Discussing strategies for a possible siege. Going over TO&Es (Tables of Operations and Equipment). Inventories. And making shopping lists for the immediate future.

Which arrives the next morning. The local and state police arrive with every intent of confiscating the Academy’s armory of rifles, pistols, ammunition and anything else that isn’t nailed down. Major Moreland receives them. Calmly attempting to negotiate to them and hopefully arrange a meeting with the Commandant and Board. The cops and Sheriff (James Handy) are polite, but really don’t want to hear it. Entering the armory. Only to be baffled by the suddenly missing weaponry.

It all appears suddenly. In the hands of the Cadets along the upper gang way as a trap is sprung and a Mexican Standoff soon develops. Escalation is slow. With a clutch of cadets sent out in a Deuce and a Halves and pickups for provisions. Which are purchased and stowed in the larger truck. As townies intervene. Only to be sent scrambling by Captain Shawn emptying a magazine of his M-16 into the air.

Electric power in the Academy is cut off later that evening. And it’s shades of Waco, twelve years early from there on out. The cadets have back up generators, but not a lot of diesel to run them as perimeter guards are set. The National Guard arrives with an M-48 Patton tank and loud speakers are set up. As the parents of the cadets, led by Major Moreland’s father are called in.

The parents are quick to quash the idea that their sons are being held against their will. As the cadets unanimously decide to stay where they are. Defending their home while quite aware of the consequences. The National Guard’s Colonel Kerby (Ronnie Cox) comes forth and cons, cajoles and palavers with Major Moreland to no avail. Both are aware that things very well could end badly.

And that begins a few hours later. As one cadet is badly burned trying to re start a generator. An ambulance under a white flag enters and Major Moreland assembles the commanders and cadres who hold their ground as the ambulance leaves.

The following morning does not bode well. The troops are reassembled. Lead by Cadet Captain Ed West (Evan Handler), the ranks are asked if they would like to leave. Easily half stack their rifles and head for the tank protected gates. In the interim, Major Moreland ask for a meeting with General Bache. Only to be told that the Commandant expired from a heart attack after his arrest.

A memorial service is held for the Commandant as cohesion slowly slips. Egged on as the M-48 rolls up to the gate. A young cadet, “Bug”, (Billy Van Zandt) panics. wants to surrender. Drops his rifle as he runs forward. It goes off and the “fur ball of battle” makes itself known.

Disheartened, Major Moreland again assembles the troops and orders them to lay down their weapons and surrender. The cadre obeys. Except for Cadet Captain Shawn. Who takes a perch in his room with his rifle.

I’ll leave it right there for Spoliers’ sake… 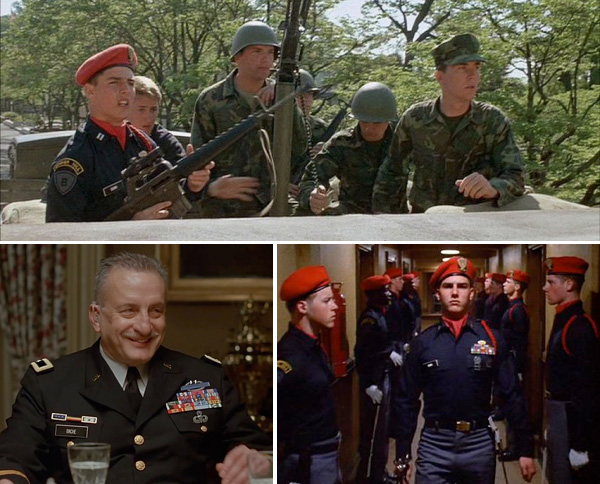 Now. What Makes This Movie Good?

A decently developed and executed look at life at fictionalized, though very close to home Military Academy or Institute. Who train young men for the rigors of West Point, V.M.I, or the Citadel in North Carolina. Teaching the fundamentals through recitation and discipline. While opening minds to histories of armed conflict and its great leaders.

And the cast offers a serviceable, at the time across the board pallet of candidates to fill future ranks. Sean Penn excels at being Tim Hutton‘s right hand man and sub rosa Executive Officer. Surprisingly level headed, though with an energy that is just waiting to burst out. While Tom Cruise is all smiles and charm. Until the only life and family he has known is threatened.

Each has their own scenes to steal and show an early master’s touch. Under the deft control of Harold Becker. Who would acquire lessons learned from this and earlier films, The Onion Field and The Black Marble. And apply them to later projects, Sea of Love and City Hall. Director Becker and screenwriters Devery Freeman, working from his novel, Father Sky. And Daryll Ponicsan (The Last Detail, Cinderella Liberty) make the film appear and feel much more than its disjointed, then quickly assembled parts.

The chance to see young talent. Either fresh from television or its movies given the chance to ply their accumulated craft and strut their stuff. And they do! As mentioned above, Penn and Cruise show complete familiarity and calm with this newer, larger medium. And what young aspiring actor wouldn’t jump at the chance to share lower billing with Actor Emeritus of the day, George C. Scott?

Though, it is Tim Hutton and his Major Moreland who carries the film. Earning a Golden Globe Nomination for his performance. Showing all the requirements of a leader. Calm in discussion. Listening intently to every word before rendering a decision. Everything an officer and leader should be.Then revealing a hidden and very strong aptitude for negotiation, guile and tactics with the older, wiser uniformed “adults”.

His discussions with Colonel Kerby and later his father (Wayne Tippitt), an Army Master Sergeant (“God” to all lower enlisted) are worth close attention. Both elders want a peaceful resolution. Though both understand Major Moreland’s position and tenacity. Quietly reinforced by Giancarlo Esposito’s Cadet Captain J.C. Pierce. Who ramrods the younger perimeter guards and shows an extreme inner calm and cool as numbers grow beyond the closed main gate to slowly dwarf his own.

Cinematography by Owen Roizman shows a distinct appreciation and use of shadow and light touched on in his earlier Straight Time and True Confessions. While editing by Maurey Winetrobe is first rate. Making no one scene too long or too short. Solidly enhanced by an original soundtrack by Maurice Jarre.

Thoughts on TAPS and or the ensemble cast? Let it be known in the comments.