The Academy Awards are just days away. By this time next week, ardent movie fans and even casual movie fans will likely be participating in some kind of Oscar tittle tattle. 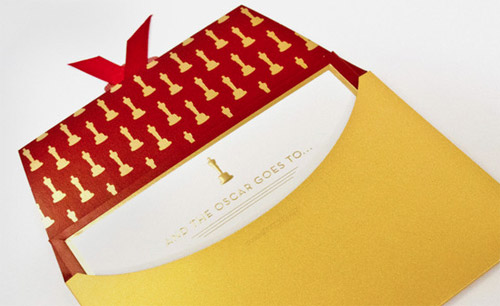 Some of you might already know that the Oscar envelope just got a new makeover last year, updating the plain white envelope design they had been using for the last 70 years. You can read about the design in this article, taking cues from old Hollywood, it’s made to look as glamorous as the ceremony itself.

It sure is pretty, but the thing that matter most about the Oscar but yet always been a mystery to me is who determine whose names that’ll get printed under the beautifully embossed lettering of “AND THE OSCAR GOES TO.” A lot are riding in that decision point, let’s face it, no matter how we as moviegoers feel about the Oscars, for the industry folks, winning or even just being nominated for an Oscar affect their career in a big way. But who really make up the 5,765 AMPAS’ voting members that largely influence the Oscar nominees and winners?

The L.A. Times did a study recently and published its finding in this article. Well, the envelope might have a fresh new look, but suffice to say that the AMPAS as an institution is still pretty much same old, same old.

A Los Angeles Times study found that academy voters are markedly less diverse than the moviegoing public, and even more monolithic than many in the film industry may suspect. Oscar voters are nearly 94% Caucasian and 77% male, The Times found. Blacks are about 2% of the academy, and Latinos are less than 2%.

Below is part of the info-graphic that illustrate the findings, you can view the complete chart here.

Apparently not much has changed since its first organizational meeting in 1927. The article did say that Academy leaders do want to diversify, but “… change is difficult because the film industry is not very diverse, and slow because the academy has been limiting membership growth for the last decade,” President Tom Sherak and Chief Executive Dawn Hudson said in the article. Ok, so we’re supposed to give the Academy points for trying?? You’d think 85 years is a long enough time to make at least a noticeable change.

Well, this race/gender inequality issue is disheartening but not exactly surprising, but what is quite interesting to learn is that the majority of members (64%) have never been nominated or win an award themselves. Now, this article also revealed that some unexpected members of the Academy, some more mind-boggling than others… Pee-wee Herman? Meat Loaf??? Erik Estrada???? Yep, they are all members whilst Woody Allen and George Lucas are NOT. Oh and apparently Viggo Mortensen actually turned down an invitation. He was invited in 2004 and was nominated for an Oscar in 2008 for Eastern Promises but the article reported that his spokeswoman said, “Viggo does not like judging art officially,” Hmmm, would that hurt his Oscar chances in the future, I wonder?…

So what are your thoughts about this study folks? Surprised, appalled, don’t care? Well, let’s hear it.

44 thoughts on “Inside the Academy Infographic – just who are the Oscar voters?”