It’s Monday again! Did you all have a nice weekend? Well, it’s a nice one weather-wise here in the Twin Cities, in fact, it could very well be one of the best Halloween weather ever. We usually get snow or unusually chilly temps, but yesterday there wasn’t a cloud in the gorgeous blue sky and it was warm enough to forgo your jacket! 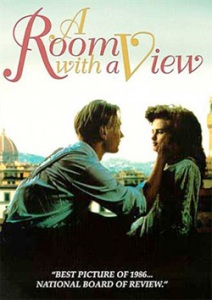 Friday was Girls Movie Night for October, where my girlfriends and I take turn hosting dinner and a movie. A Room with a View had been on our to-watch list for some time, but due to a couple of snafus on my part, we haven’t been able to get the movie until now. It’s a Merchant-Ivory period drama starring a then 19-year-old Helena Bonham Carter set in Edwardian England at the turn of the 20th century. I suggested this movie after reading all the accolades this movie got (winning 3 Oscars, and a slew of other awards), and the story of illicit romance appeals to me. 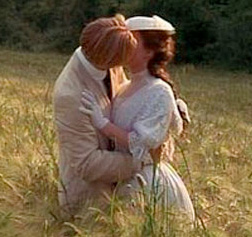 The movie opens with a gorgeous view of Florence where Lucy Honeychurch (Bonham Carter) and her chaperon Charlotte Bartlett (Maggie Smith) are vacationing. Unfortunately, they didn’t get the view from the room they were promised to get, and they complain about it over dinner (I suppose I’d be too given the view is of the Ponte Vecchio bridge over Arno river!). Upon learning about the situation, fellow guests Mr. Emerson and his son George gladly give up their room-with-a-view to Lucy and Charlotte. Before long, sparks fly between George and Lucy, and George makes sure Lucy knows it. But Charlotte reminds Lucy that George isn’t the perfect suitor, as the Emersons aren’t as socially acceptable (basically for being too ‘open’ for such a stifled society), and so she must let her go and marry someone her family would approve. To complicate matters, the Emersons end up becoming their neighbors and not only disrupts her nuptial plans but also challenge her way of thinking, as well as those closest to her. 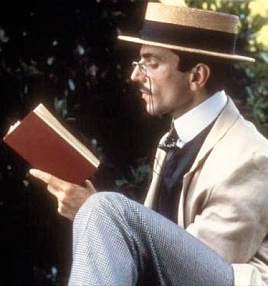 Perhaps I should give this movie another go, but upon initial viewing, it didn’t wow me as much as I thought it would. I like the premise of the movie, but I thought the movie is kind of all over the place and boring at times. I actually dozed off the last 15 minutes of the movie, I did wake up just before the closing credits when George & Lucy sit by the window exactly like in the movie poster. It’s quite obvious the plot is predictable, but I don’t mind that so much if I can just get into characters. Aside from their first unexpected but passionate kiss in the fields, I never quite get into the main love story. The baby-faced Bonham Carter captured the sweet innocence of her character, yet she just wasn’t captivating enough for me to root for her. But the worst part is Julian Sands’ stilted performance, which pretty much drew jeers from my girlfriends for his unconvincing delivery. He just wasn’t compelling enough in the ‘romeo’ role, in fact, there’s a lack of emotion from the romance the entire plot is built on, which is a pity as it would’ve been a far more engaging movie. There are strong performances from Maggie Smith and Judi Dench, but the scene stealer here is the unrecognizable Daniel Day-Lewis as Cecil, Lucy’s bookish and pretentious fiance. His character is a stark contrast to the free-spirited, fun-loving George, and we’re supposed to dislike him, but his amusing portrayal truly is one of the highlights of the movie. No wonder Daniel’s career is light years ahead of the actor in the lead role.

Oh, one thing I didn’t quite expect from this period drama is the scene of male frontal nudity in the skinny dipping scene. I’m not talking about a brief glimpse but an extensive scene of the three male characters being shown clowning around freely in and out of water, there’s even a chase scene that lead to the women discovering George and Lucy’s brother Freddy in their birthday suit. I suppose it’s meant to show the stark contrast between the openness of the modern sensibilities and the repressed culture of the day, which seems to suggest that modesty equals ‘uptight.’ Well, call us old fashioned but we we were as taken aback as the female characters in the movie and we certainly won’t be comfortable running into guys skinny dipping in real life. The scene itself is pretty hilarious, it wasn’t scandalous or obscene, but it did take us away from the movie for a little bit.

Overall, it’s a decent movie and I’m glad I watched it, but I can’t say I love it. It’s a gorgeous movie for sure, what with the Florentine art and architecture, the melodious Beethoven music and the picturesque scenes of Italy and English countryside, if only the romance is equally bewitching. If anything though, it made me want to go back to Firenze pronto!

Anybody has seen this film? Well, what did you think?

13 thoughts on “Weekend Roundup: Musings on A Room with a View”