Today we celebrate the birthday of a special actor Rufus Sewell. I had a birthday post for him last year, but this time I thought what better way that to invite Mr. Sewell’s number one fan, my good friend Prairiegirl to share her own heartfelt tribute. Read on: 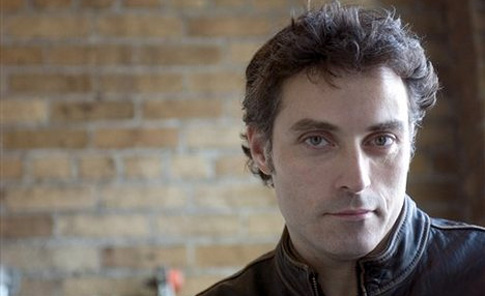 Today Rufus Sewell is 43. Who would have guessed what would happen after I discovered him only two-and-a-half years ago. Since then I have had the distinct pleasure of catching up on all of his work I could get my hands on, from 1992 (Gone to Seed, British TV series, seven episodes) forward. His earliest film work is listed as Twenty-One (1991) on IMDb (just ordered a used VHS copy from Amazon, finally gave in because I can’t find it to rent or to buy on DVD anywhere. It was only $6. If you want a new, unused VHS tape of it be prepared to pay a whopping $47! More about this phenomenon next.) Here’s a very early clip of Rufus as young bus driver Robby Fay in The Man of No Importance (1992), along with middle-aged bus driver Albert Byrne (Albert Finney), in a heartwarming tale of a friendship between colleagues. Here’s a clip of the final scene in the film:
Unfortunately, AMONI is impossible to get on DVD, either for rent or purchase. I gave in and bought this one on VHS also, but it doesn’t play right in my old VCR any more. This Audient blog post laments this sad condition.
….
Discovery.

I was half way through watching Tristan and Isolde (2006, recommended by Netflix) in June of 2008. In the middle of the scene with Rufus and James Franco (Tristan) on the bridge where Lord Marke (Rufus) asks if Isolde is faithful to him, I said to myself, “who is this [amazing] guy?!” He spoke with so much emotion, with exceedingly convincing expressions and just so much shear heart that I rewound that scene about fives times and was immediately in love with my first movie boyfriend. When I told “Flixy” (rtm) how excited I was, (now that I had someone comparable to her dear Gerry Butler), she said, rather nonchalantly, oh, yes, Rufus, I like him, he’s in Dangerous Beauty, The Illusionist, The Holiday and knew he was a Brit. Well, imagine my delight, again! So then the relentless hunt began – to see anything I could that mentioned Rufus Sewell, to see if T&I was just a fluke, or if he was always that stunning.
…
Hunt and Catch.
Very soon after, Flixy and I had a Friday Movie Night and watched Dangerous Beauty (1998), and I totally, completely, fell head-over-heals. I had already seen The Illusionist and The Holiday without realizing at all that Rufus was in either, that’s how much the Bridge scene took me away.
…

Turns out many knew him from the 1998 mystery/sci-fi thriller Dark City. Not my usual genre, but understood the praise after watching it. Then came his more well-known parts as vengeful, spurned suitors in A Knight’s Tale (2001, Count Adhemar) and The Illusionist (2006, Crown Prince Leopold), and his downright villainous scoundrel in The Legend of Zorro (2005, Armand). He played rather ordinary men in some rather interesting circumstances in Cold Comfort Farm (1995), The Woodlanders (1997), In a Savage Land (1999), Paris, je t’aime (2006), Amazing Grace (2006) and Downloading Nancy (2008). He is in period-costume glory in Hamlet, Arabian Nights, Helen of Troy and Pillars of the Earth.

He is comfortable either on TV, film or stage. He prefers finite TV series (Gone to Seed, MiddleMarch, The Last King, John Adams, Taming of the Shrew) as opposed to an open-ended series like Eleventh Hour, (which lasted only a year on CBS), but was too long to for him be in one place. According to Rufus… “an interesting experiment” as he calls it, to be polite. And aside from his outstanding acting, in ordinary life the guy is just plain charming, considerate, and friendly… as displayed in Craig Ferguson’s interview… which easily endears me to him even more.

Anticipation
Now that I’ve seen most there is to see of Rufus outstanding work, (except, or course, his stage plays, which include performances in Arcadia, Translations and Rock ‘n’ Roll), the only thing that’s left to do is see it all over again, or look forward to what’s coming up. The Pillars of the Earth (eight-part mini series) debuted in the USA in July, is playing on BBC4 in Britain currently, premiering in Germany this week and has been seen in Italy, Greece and maybe more. I haven’t even seen any episodes yet, but there’s buzz that Emmy nominations can’t be far behind. I don’t have Starz, so am anxiously waiting for the DVD to come out at the end of November here in the USA. To see the extraordinary range that Roof is capable of, watch this compilation of him as Tom Builder in Pillars of the Earth. Even where the music eclipses the dialogue, you can’t miss the depth and range he conveys:

And then we can look forward to seeing him out of 11th Century garb and back in a suit again in the Aurelio Zen series he stars in on PBS sometime in the future and another contemporary role (a “small, but significant” role, according to Ruf) in the major Hollywood film The Tourist opening here December 10.

…
Real World.
And lastly, I have to give a shout out to all my fan girl friends over at The Rooftop (Everything Rufus, All The Time – made up tagline, but so true). Life would be a little less bright without it. And I would feel a lot crazier as a Ruf fan if not for them, because their fantasies (and “Caps” ;-)) are usually more than I could ever dream up. But some really do come true however, just ask Gloria, aka Dreamer who met Ruf on the set of Zen in Rome this summer.
…
So, in this second year of FlixChatter, comes the second salute to one of the most endearing, splendid and remarkable actors. Mr. Sewell, if you’re reading this, I wish you a very happy birthday!

26 thoughts on “Guest Post: The Joy of Discovering Rufus Sewell – a Birthday Tribute”