Apparently the trailer is up already, and by golly does it look epic! And the scene of the fashion-challenged Harry septuplet is in there, too 😀

Voldemort’s power is growing stronger. He now has control over the Ministry of Magic and Hogwarts. Harry, Ron, and Hermione decide to finish Dumbledore’s work and find the rest of the Horcruxes to defeat the Dark Lord. But little hope remains for them, so everything they do must go as planned. 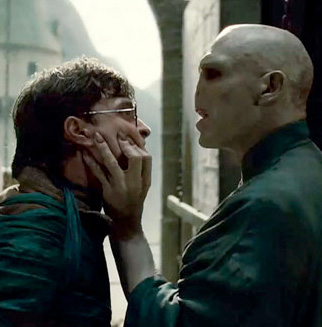 I’m a relatively new HP fan, and this trailer looks incredibly exciting and making me giddy with anticipation. Voldemort is like the Darth Vader of the new millennium and he doesn’t hold back his desire to finally finish off ‘the boy who lived.’ I get goosebumps every time I hear him hiss, “I’ve seen your heart… and it is mine.”

Though I can hardly wait to watch the conclusion of the series, I’m glad they decided to split this into two parts. The movies are kind of a summary of the books, according to a friend of mine who’ve read them all, so naturally they try to jam pack as much material into a 2-hour feature film. Hopefully they won’t feel so rushed this time, and the series will end on a high note!

The ubiquitous Bill Nighy joins the already awesome ensemble of British cast: Helena Bonham Carter, Alan Rickman, Ralph Fiennes, Bill Nighy, Tom Felton, Michael Gambon and David Thewlis. It’s also amusing to see the trio of young lead actors Daniel Radcliffe, Rupert Grint, and Emma Watson all grown up now, I mean they all literally grew up on the set of these HP films since it started a decade ago!

What do you think, all? Anybody else as excited as I am to see this one?

14 thoughts on “THIS JUST IN! Harry Potter and the Deathly Hallows Part 1 – Trailer 2”