In the climate we live in today, with global warming, political unrest AND pandemic wreaking havoc practically everywhere, do we need an apocalyptic movie about an extinction level event? I actually have been avoiding depressing apocalyptic movies these days, though sometimes I’m curious to see something because of the cast. Well, Adam McKay’s Don’t Look Up is as starry as it gets.

We’ve got Leonardo DiCaprio as an astronomy professor Dr. Randall Mindy and Jennifer Lawrence as grad student Kate Dibiasky who discovered a huge comet the size of mount Everest (deemed the planet killer). The scariest part is that the comet is hurtling towards earth at such velocity that humanity only has mere 6 months to deflect it or we’d all be blown to smithereens. It’s a topic that hits uncomfortably too close to home, not just in terms of how divided out nation is in terms of the environment, but also in regards to the pandemic. The ‘sit tight and asses’ approach and then later using ‘don’t look up’ as a campaign slogan are so absurd yet sadly not-so-outlandish given Trump’s initial reaction to Covid. 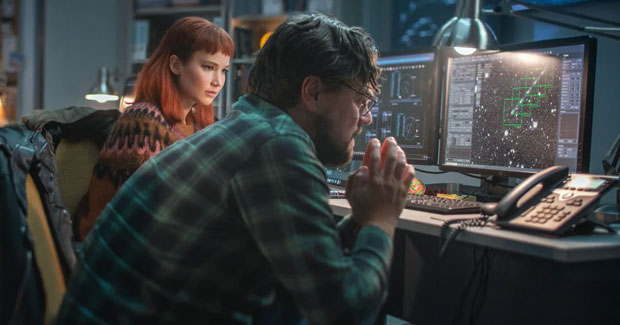 McKay’s script hits a few nerves, especially in terms of the growing rise of scary misinformation that’s gotten more and more out of control to the point of humanity survival’s self-sabotage. Now, even if one agrees with every point he’s making here, it doesn’t mean the film is automatically an enjoyable one. I think even a small dose of nuance would’ve worked in its favor, but then again, subtlety and restraint have not been McKay’s biggest strength. 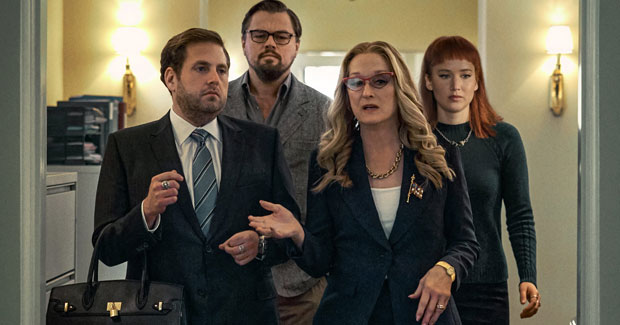 There were a few laugh-out-loud moments, many of them involving Leo’s character. But for the most part, it tries too hard to be funny as a lot of the jokes don’t land. Some are so way over the top it felt like I was watching an experimental variety show sketch written by interns. Besides, impending doom isn’t exactly funny business, so even when I was laughing, there’s always that nagging unsettling feeling.

My biggest issue is how McKay writes his characters. Regardless of which side they’re on, they are borderline caricatures that none actually has a semblance of a relatable human being. Leo and Jen are the face of the ‘sane, intelligent humans’ who trust science and use crucial findings to help save humanity. While Meryl Streep as president Orlean and Jonah Hill as her chief of staff son Jason are basically Trump-inspired buffoons who can’t get their heads out of their @$$es long enough to face anything, no matter how dire, if it does not fit their agenda. Jason is definitely modeled after Eric Trump and his character is stupendously irritating.

The film sure has star power though I can’t say it amounts any of the stars’ best work. Leo and Jen fare better here and McKay allow each of them to shine, which in this case equals to having a moment of ‘going completely berserk.’ This is Lawrence’s first big movie after a few years hiatus and her character reminds me a bit of her role in Silver Lining’s Playbook.

Meryl and Jonah’s characters are meant to make viewers angry at their blatant ignorance and banality, so in that sense they succeeded. There are moments where I just want to throw stuff at my TV every time Orleans and Jason are talking. Same with the two morning show hosts (Cate Blanchett and Tyler Perry) with their trivial feel-good programming. The moment Dr. Mindy just completely lost it during live TV is definitely a highlight here (it must be in Leo’s contract to have at least one freak out scene in his films). 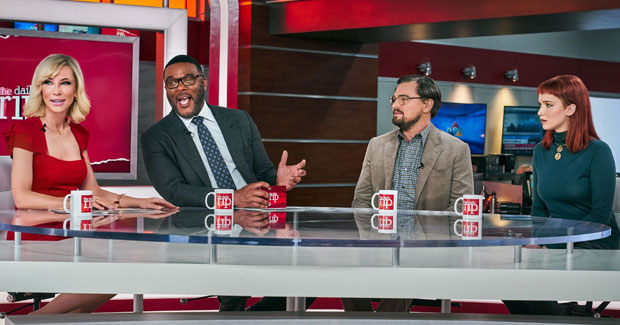 The most bizarre acting is courtesy of Mark Rylance who admittedly is quite inspired casting as Peter Isherwell, an amalgamation of all of the tech billionaires Jobs/Musk/Bezos combined. Rylance is a brilliant actor and while I understand his character is meant to be peculiar, it was so off-the-wall that it was cringe-worthy. But perhaps Rylance is the only actor in this ensemble who understood the assignment so well that he was actually satirizing his own character.

The great Cate Blanchett is reduced to playing a variation of Fox News-type, sexy blond anchor. I usually love seeing Cate playing unsympathetic characters but not when her role is stripped off wit nor any kind of charm. Character actors Rob Morgan and Melanie Lynskey have a brief but memorable turns as a NASA official and Leo’s stay-at-home-mom wife, respectively, while Timothée Chalamet plays a skater boy who’s raised as an Evangelical Christian who hasn’t turned away from his faith. The praying scene towards the end is perhaps McKay’s blunt jab against a popular poll findings that even non-believers turn to prayer in the face of death.

Most doomsday/apocalyptic movies, even the most clichéd-ridden and bombastic ones, still show a slice of humanity’s triumph against adversity. McKay on the other hand, seems to have a very pessimistic view of people as a whole. He deliberately aims for a gloom and doom approach here with no room for even a sliver of hope. As it the whole thing weren’t depressing enough, we’re subjected to a garish Ariana Grande‘s music video [aghast]. I actually have never listened to anything she’s done until now, but I have to give props to her for being a good sport about poking fun of her own pop-star persona.

At 2hr18 min it’s also too bloated with a bunch of unnecessary scenes that don’t drive the story forward. The first hour was certainly promising, but it quickly became repetitive and verbose. The thing is, nobody likes to be hit over the head with anything, especially a topic so glaringly obvious. At the end of the day, the movie is just too pretentious and self-congratulatory for its own good. It also thinks most viewers lack the intellect to discern its allegory that he spoon fed us to the point of gagging. It’s a far cry from McKay’s previous work like The Big Short which is a biting satire of the financial crisis.

The characters are saying a lot on both sides, but in the end doesn’t the film really offer more insights than what most viewers already know. Though it may seem that way, Don’t Look Up is not as shrewd nor smart as it obviously think it is.

Have you seen DON’T LOOK UP? Well, what did YOU think?