After watching movies at home for about a year and a half, it was so nice to make my return to the movie theater to see the latest in what is probably my favorite modern horror franchise (with the exception of a couple of the spinoffs). I love The Conjuring and The Conjuring 2, and while the third installment’s subtitle is a little silly, it’s probably my favorite one of the series.

In The Conjuring: The Devil Made Me Do It, paranormal investigators Ed and Lorraine Warren (Patrick Wilson and Vera Farmiga) find themselves entangled in a satanic curse conspiracy as they attempt to prove that a young man accused of murder, Arne Cheyenne Johnson (Ruairi O’ Connor), was under demonic possession at the time of the crime. The more they dig, the more they realize this isn’t an isolated incident; this particular entity has claimed other victims, and the Warrens may be next.

The reason I like paranormal/supernatural horror movies more than other sub-genres is because the danger isn’t something physical; you can’t just double tap a ghost or demon or run and hide from them, and this movie does an especially good job making it feel like there is no escape from the evil terrorizing the protagonists; nowhere feels safe, and nearly every scene is filled with tension. It immediately starts with the violent exorcism of 8-year-old David Glatzel (Julian Hilliard), and that intense, frenetic scene sets the tone for the rest of the film; my heart rate was instantly up and stayed there for the next two hours. While there are obviously several jump scares, they mostly all feel earned; the build up to some of the particularly scary moments is exquisite. 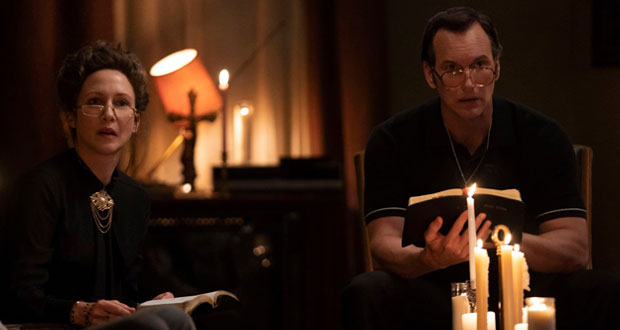 Like the previous films, one of this movie’s biggest strengths is its stellar cast. As usual, Patrick Wilson and Vera Farmiga have excellent chemistry. Other standouts include John Noble as Father Kastner, who gives a wonderfully eerie performance, and Eugenie Bondurant as the mysterious occultist, who, despite not having a lot of screen time, is memorably spooky in her role.

I only have a couple complaints about this movie, directed Michael Chaves. The first is that there’s a good amount of sappy, saccharine dialogue that made me roll my eyes more than once and made several of my fellow audience members groan. The other is that there are a couple moments where characters who are otherwise intelligent and level-headed make absurdly stupid decisions that put them in danger, which feels like such lazy writing choice; the same outcome could have easily been reached through other actions. It might seem nit-picky, but it’s a big pet peeve of mine in horror movies.

Overall, though, The Conjuring: The Devil Made Me Do It is an excellent addition to the series, and I’m already looking forward to watching it again, along with the first two, as a triple feature once it’s available for streaming.

Have you seen the latest from THE CONJURING franchise? Well, what did you think?