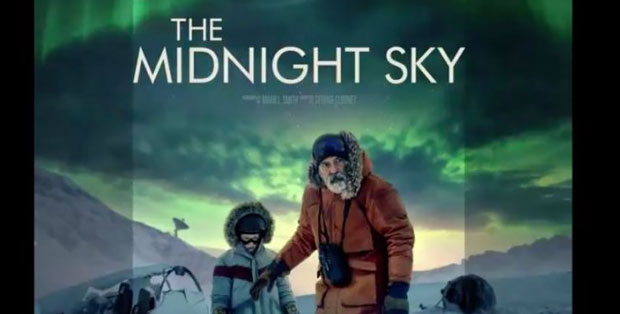 The success of GRAVITY back in 2013 led Hollywood to fall in love with the sci-fi space adventure genre again. I’m talking about non-Star Wars and Star Trek related films of course. Within the 2010s, there were some great space films such as INTERSTELLAR, THE MARTIAN, AD ASTRA and FIRST MAN. But there were also some clunkers like PASSENGERS, LIFE and THE CLOVERFIELD PARADOX. The latest space adventure is THE MIDNIGHT SKY directed by and starred George Clooney. 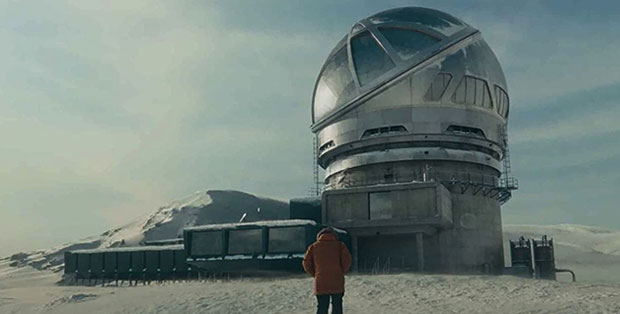 In the year 2049, a catastrophic event has caused the earth to become inhabitable. A lone scientist named Augustine (Clooney) decided to stay at his post at the Barbeau Observatory in the Arctic Circle while everyone was order evacuate the area before the “event” happened. A few months later, Augustine realized that he might be the only survivor living on earth. He soon learned that a group of explorers on a spaceship called Aether are heading back to the now dangerous earth. He needs get in contact with the ship and tell them to turn around. While on Aether, the crew lead by Captain Adewole (David Oyelowo), Sully (Felicity Jones), Sanchez (Demian Bichir), Maya (Tiffany Boone) and Michell (Kyle Chandler). The crew is worried because they haven’t had any communications from earth in a long time.

Augustine is unable to communicate with Aether from his current observatory. So he needs to travel to another station that’s more well equipped, but things got complicated when he discovered a child named Iris (Caoilinn Springall) who was left behind during the evacuation. Now the two lone survivors on earth must make a long trip through the freezing temps of the arctic in order to reach another observatory station. The crew on Aether also ran into their own trouble as the trip back to earth was thwarted by some unforeseen dangers. 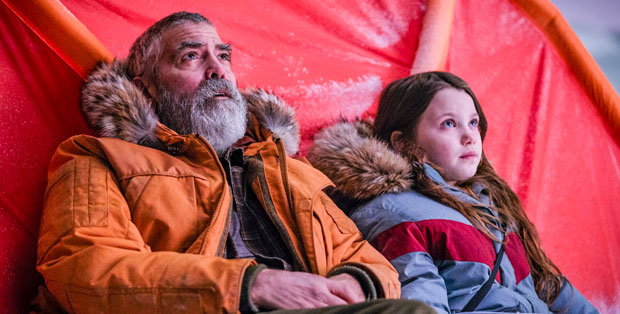 Based on an excellent novel called GOOD MORNING, MIDNIGHT written by Lily Brooks-Dalton, the screenplay by Mark L. Smith stays pretty close to the source material. Smith did change a couple things up, like the names of the crew of Aether and added some set pieces that didn’t exist in the novel. I loved the novel and appreciated that the filmmakers decided to stay true to the source, but I think this is where I think they should have taken some liberties and change the story to make it more exiting and cinematic. I feel like there’s not much urgency in the story to make people care about the characters’ survival. I get that Clooney wanted to make a slow-paced character study piece, but I don’t think he’s talented enough to pull it off. What worked in the book doesn’t mean it’s going to work on screen. I think a more talented filmmaker like Steven Spielberg, Ridley Scott, Afonso Cauron or David Fincher could’ve turn this into something special.

Even though he fell short on the storytelling part, Clooney and his cinematographer Martin Ruhe shot a beautiful looking film. I’ve said many times before, most of Netflix’s films tends to have that made for home video look to them but with a high budget of over $100mil, Clooney and his crew delivered a stunning looking film. Kudos also goes to composer Alexandre Desplat who composed a very beautiful and haunting score.

Performances by the actors really saved this film for me. Jones, Oyelowo and the rest of the supporting actors are memorable in their respective roles. Clooney whose character is in his 70s in the book, decided to lose a lot of weight for the role to make himself look older and I thought he’s great here. Also, in a memorable role is Ethan Peck as the young Augustine in flashback scenes. But the scenes stealer belongs to Caoilinn Springall and she only has one line of dialog in the entire film. Her performances consist of body language and eye contacts, for such a young actress, she’s quite excellent here. I predict she’ll have a long career in Hollywood.

Netflix is obviously hoping this will their big Oscar film this year, but it seems most critics and audiences don’t really care for it much. If you’re a fan of the novel or enjoy sci-fi space adventure, then I think this is worth your time.

So have you seen MIDNIGHT SKY? Well, what did you think?

Leave a Reply to Often Off Topic Cancel reply