If you’ve been reading my blog long enough, you know that Christopher Nolan is one of those filmmakers whose films I always anticipate. Even if I don’t end up loving the film (*cough* Interstellar *cough*), I still consider his film release as an ‘event’ and this one is no different. The repeated delays–it was supposed to be released this Summer on July 17–due to Covid-19 somehow made it even more highly-anticipated by film fans, me included. After careful considerations and reading all kinds of articles on it, my hubby and I decided to go ahead and see TENET at a cinema, as it’s always intended, and we chose EMAGINE’s EMAX theater with its wall-to-wall screen and Dolby Atmost surround sound.

Let’s just say that even after a couple of days mulling over it, consuming all kinds of articles and videos of ‘TENET endings explained’ … I still can’t fully explain just what the plot is about. But then again I shouldn’t feel too bad as even some of the actors couldn’t really explain it during the press tours! Those who are familiar with Nolan’s work should expect the fact that Nolan often treats his films as a big puzzle piece… he’s not interested in spoon-feeding the audience with straightforward premise and neat endings wrapped nicely with a big red bow. If you think Inception and Interstellar is confusing, be prepared for a discombobulating treat with TENET. Don’t worry, I won’t reveal any spoiler here, but if I do, I’ll be sure to give you a fair warning.

As a scientist said in the film, ‘Don’t try to understand it. Feel it.’ I remember hearing that in the trailer and you know what, given how confusing this movie was, I’m glad I took that advise to heart. Per Nolan’s tradition, his films opens with with a high-octane action piece, this time at an opera house. It’s full of adrenaline, suspense and mystery that definitely gets you in the mood for what about to unfold. Unfortunately, I immediately notice sound issues which apparently has plagued other screenings as well. According to this article, apparently the hard-to-hear dialogue is on purpose, which I find hugely irritating. I mean, I don’t mind a puzzling plot, but how do they expect us to figure out what’s going on if exposition dialogue are delivered in muffled speech or drown out by all kinds of noise. It’s also quite eerie seeing characters in this movie using masks (it’s even on some of the posters), even if it’s got nothing to do with a pandemic. 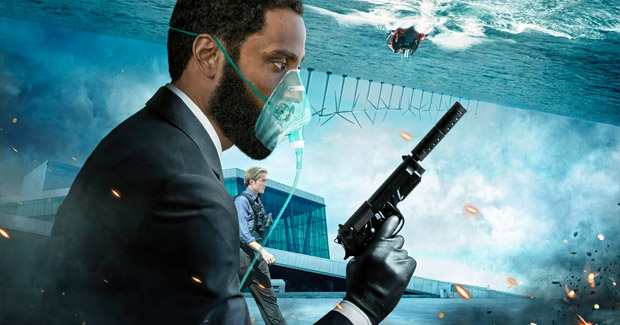 One thing for sure is Nolan’s obsession with the spy genre, given his affinity for the Bond movies, having seen The Spy Who Loved Me as a young boy with his dad. But he said in interviews that he wants to up the ante and deliver something that’s geared towards the modern audience. Nolan basically fused his favorite genre with a high-concept of time inversion, not to be confused with time travel. More on that later, but let’s start with the Bond-ish elements. John David Washington‘s The Protagonist, who’s a CIA agent, oozes 007’s coolness and swagger, sporting one sleek suit after another and can effortlessly take out half a dozen goons in a cramped kitchen with his bare hands without breaking a sweat. His ‘Felix Leiter’ is Robert Pattinson‘s Neil, sporting tousled blond locks who looks equally dashing in a suit. The two has a fun chemistry, definitely the best ‘bromance’ in Nolan’s movie so far. I love the scene where they first met in Mumbai and later when the two try to break into a high rise apartment. 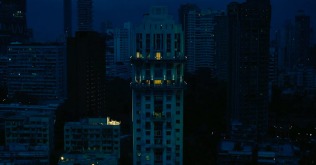 I’m surprised Kenneth Branagh hasn’t played a Bond villain yet, but well, he practically plays one here as an arms dealer oligarch Andrei Sator, complete with a droll Russian accent. In classic Bond-baddie fashion, Sator threatened our protagonist with choking him with his own balls, ahah. There’s also a damsel in distress in the form of Sator’s estranged wife Kat (Elizabeth Debicki). SPOILER ALERT (highlight to read) – if you have seen The Night Manager miniseries, Debicki’s character is basically similar to Jed who’s also the love interest of an arm’s dealer.

The high-concept element here is the time inversion, where characters can move backwards in time. Some key phrases are required to understand just what TENET is about… Entropy Inversion, Temporal Pincer Movement, Turnstile, Palindrome are just a few of them. It’s the kind of movie that would require a glossary of physics to comprehend. Of course, the title itself is a Palindrome, which refers to a word, phrase or sequence that reads the same backward as forward. Clearly I had fallen asleep in physics class as the word entropy is as perplexing as Kenneth Branagh‘s Russian accent. 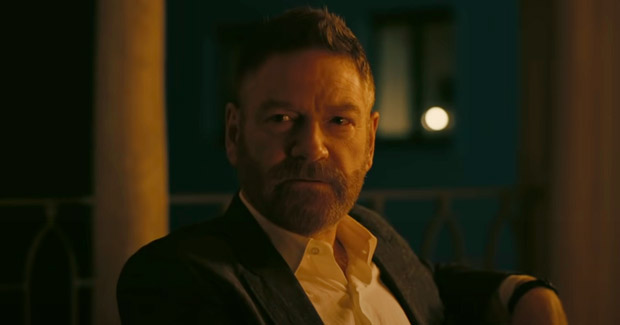 Apparently Nolan worked with physicist Nobel laureate Kip Thorne once again, the same physics expert he consulted with in Interstellar on wormholes and time travel. This time, he’s consulted on the subjects of time and quantum physics, specifically time inversion where characters move backwards in time. Even after reading all kinds of articles explaining the science of the movie, some things just don’t add up. SPOILER ALERT – just how in the world would a kill switch on Sator’s Fitbit would be able to activate the Algorithm to reverse entropy that would make the future cease to exist??   I find that TENET is best enjoyed when you just surrender to the movie and all its cool spectacle, like the backward car chases, instead of trying to process it all during the movie. Now, I don’t advise you ‘park your brain at the door’ the way you would when watching a Fast & Furious movie, but I would refrain from overthinking it as you are watching it. I actually have a better appreciation of it after I had spent time reading about its concepts afterwards.

That said, I’m not going to let Nolan off the hook in his storytelling style, as I think there are flaws that dampen my enjoyment. The one sequence in particular is the climactic battle at the end in an abandoned Soviet banker. There are so much information going into it, delivered by a soldier by the name of Ives (Aaron Taylor-Johnson) that’s quite tough to follow. By the time the two set of troops are on the ground, things are moving fast, loud and bombastic that it was hard to decipher just what in the world is going on. SPOILER ALERT – it actually took me a while to realize that half the troops are attacking while inverted (that is they’re moving back in time) and the other half moving forward as normal. I wish this sequence were filmed in a way that’s more comprehensible as I practically tuned out because the massively loud sound mixing alone was simply an attack on my brain.

Another major issue I have is in regards to Sator who could’ve been a strong villain. I think his motives are pretty lame (as lame as most Bond movies) and Branagh’s performance is so uneven–at times he can be genuinely menacing but in a few scenes he’s hilarious, and not in a good way. While he’s obviously a talented actor and filmmaker, I don’t think Sator is a particularly strong villain. Oh,  I think it needs to be said that Nolan isn’t great about writing female characters either. I’ve mentioned the similarity of Kat to another role Debicki has played within the past five years that’s also a spy genre, I think it’s a waste of her talents to see her play essentially the same type of role. I do think she made the best of what she’s given, but I’d love to see Debicki portray someone who’s worthy of her prowess, both physically and in terms of her acting ability. 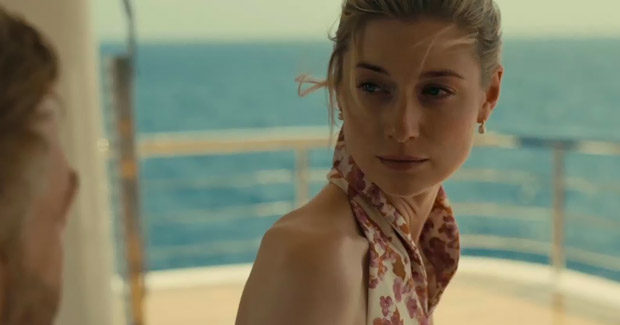 Many people have regarded Nolan as the ‘savior of cinema’ given how TENET was supposed to lift Hollywood’s box office during this unprecedented time of a pandemic. It remains to be seen of course how much TENET made, which undoubtedly would still be far less than what it could’ve made when things are normal. I think he is a talented filmmaker and a visionary, but I feel like he might have over-reached with this one and have substituted high-concept for good narrative. I’m not saying the two are mutually exclusive, but I feel like here, Nolan seems to care more about the fantastical spectacle and time-inversion/ thermodynamics extravaganza than he is about an affecting story, so the result frankly, is a cold, detached film. I think the only bit that has a semblance of emotional resonance is the ending exchange between the Protagonist and Neil, but there’s barely any heart-string tugging moment the entire film. 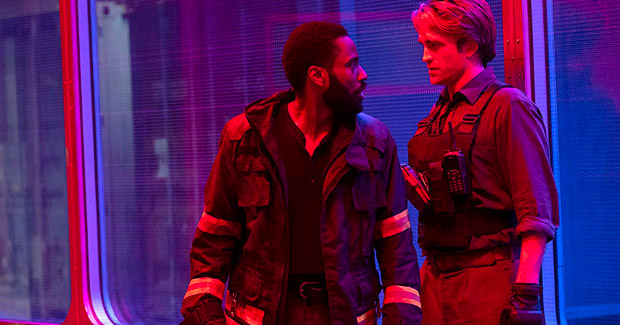 If you’re on the fence about this one though, I still recommend it despite its flaws. The 200+ million dollar budget allows for the best kind of escapism cinema could give you. If you love action, there are the cool car chases + fight scenes like you’ve never seen before, a supercharged catamaran race, AND a Boeing 747 crashing into a building! Given that Nolan doesn’t like using green screens nor visual effects, that’s an actual plane being used, not a miniature one. Props to Ludwig Göransson for the dynamic soundtrack with some seriously cool beats, and Hoyte Van Hoytema for the stunning cinematography. I’m still obsessed with the song The Plan by Travis Scott used in the final trailer – I never thought an American rapper would be featured in a Nolan movie, but it worked!

Of course Nolan’s longtime collaborator Nathan Crowley is always superb on his production design, he certainly had his work cut out for him creating some of the set pieces in various locations around the world. Speaking of locations…having been cooped up for more than half a year, I live vicariously through the characters as they globe trot to London, Mumbai, Amalfi Coast, Oslo, Tallinn, Estonia etc. Of course the filmmakers made it seem so smooth and effortless to jump from place to place and nobody seems to be having the slightest bit of jet-lag.

I’d also recommend it for the actors, particularly J.D. Washington and Pattinson. Oh shout out to Bollywood actress Dimple Kapadia in her Hollywood debut playing an elegant arms dealer Priya. Washington proves even more of his star quality and given his athletic background, he’s perfect for this physically demanding role. I have to say though that I’d like to see him in something with a little more heart as I’d love to see more of his emotional intelligence on display.

Lastly, while I still think Nolan is a visionary filmmaker, I’d love to see him tackle a smaller film (maybe under $50mil) and come up with something stronger narratively instead of just a big puzzle piece. That said, I’m glad I saw it on the big screen, and considering how confusing the movie is, the 150-minute running time actually doesn’t feel tedious or overlong. I only wish Nolan gave us a bit more for the heart as he did for the head. I will definitely be renting this once it’s available, and hopefully I’d enjoy it more on second viewing.

So, have you seen TENET? I’d love to hear what you think!