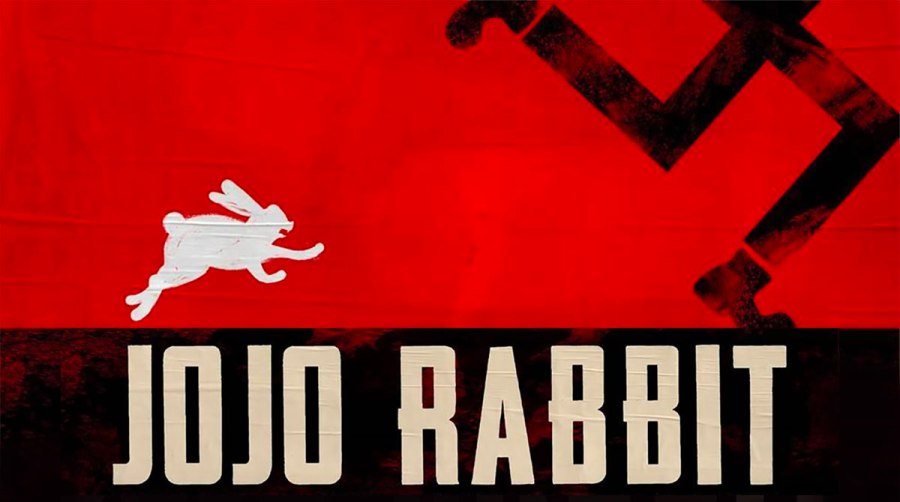 JoJo Rabbit is one of those films that I’d call deceptively-flippant. If you’ve seen at least one trailer or promo clip, you’d automatically assume this would be a bizarre comedy. Well you wouldn’t be wrong either, but there is so much more in this than meets the eye. That’s the beauty of Taika Waititi‘s work, who’s quickly becoming a force to be reckoned with in Hollywood (though it has been a long journey for him as a New Zealand filmmaker). This work is perhaps more akin to Hunt For The Wilderpeople a comedy/drama with a young boy at the center of the story.

The movie started out as rather bizarre… I mean seeing Taika playing a pudgy, halfwitted version of Adolf Hitler takes a while to get used to even after seeing all the promo photos of him in that role. I also think some of the comedic bits of the Nazi soldiers in the Hitler’s youth camp are deliberately fantastical, as is the nature of a satire. Young Johannes aka JoJo (Roman Griffin Davis) is bullied at camp, but kids are more resilient than one thinks. His imaginary friend Adolf somehow helps him cope. The story is contrasted with the kind of resiliency young Jewish girl Elsa (Thomasin McKenzie) has to endure, the girl JoJo’s own mother (Scarlett Johansson) hides in her attic. Now, I feel like the less you know going in the better you’d enjoy this film, so I’m not going to reveal anything else other than what’s shown in the trailer.

Taika sure has a gift in casting. In his debut role, Roman is perfect as the innocent JoJo who’s brain-washed to hate something he doesn’t even comprehend. He has a certain natural charm about him, not as riotous as Julian Dennison was in Hunt For the Wilderpeople, but just as affecting. I love seeing Thomasin here as a smart, defiant survivor after her amazing performance in Leave No Trace, I hope she continues to get more prominent work.  The tentative bond between JoJo and Elsa is truly the heart and soul of the film. There is real pathos in the conversations between them, and also between JoJo and his mother. And so it’s wise for Taika to keep the screen time of famous actors like Scarlett Johansson and Sam Rockwell relatively small, but with compelling and unexpected character arc. SPOILER ALERT [highlight text to read] I think by making Rockwell’s Captain Klenzendorf who runs a Hitler Youth camp as a closeted gay man is perhaps a way to humanize some of the Nazi soldiers, who might have been trapped in a society who also don’t welcome them. The only one actor who I think is rather wasted here in a deliberately role is Rebel Wilson, but she is so hilarious that she’s still fun to watch. Oh can I just say I absolutely adore fellow newbie young actor Archie Yates who plays Yorki, JoJo’s bespectacled BFF. He’s such a fantastic comic relief a la Taika’s Korg in Thor: Ragnarok.

I thoroughly enjoy this film and I will champion it come award season. The story is adapted from Caging Skies novel by Christine Leunens, Taika said it was given to him by his mother. I think it’s tricky to make a satire and it’s definitely not for everyone. I think some of the earlier scenes that seemingly make light of the Holocaust and how horrible the Nazis were (set in a famous Beatles’ song no less) might ruffle some feathers, and I wouldn’t blame them. But if people could get through 15-20 minutes and finally get to the heart of the story, it’s so well worth the journey. Naturally some scenes are tough to watch, even the comical ‘interrogation’ scene with the Gestapo secret police (led by Stephen Merchant) made my skin crawl. SPOILER ALERT [highlight text to read]: JoJo compiles a journal about the Jewish people that are filled with the terrible lies and brainwashing stuff the youth camp are teaching him, and he’d often hurl insulting stuff at Elsa.

Now as for Taika himself. Well, to say he’s the perfect Hitler would likely NOT what he’d like to hear. He’s said in interviews that he had to play the role given most actors would shy away from playing such an audacious character. But yet, even despite how flashy the role is, the filmmaker is able to make us focus on what matters–JoJo’s journey in overcoming hatred and bigotry… and better yet, learn to love someone who’s different from himself. That alone I think is quite a feat. A brilliant balancing act of tragedy and comedy in a bizarre yet poignant style… that’s definitely Taika’s unique gift of storytelling. I sure hope he gets to create more original films in addition to all his work for Disney/Marvel.

Have you seen JOJO RABBIT? If so, I’d love to hear what you think!