Merry Christmas everyone! It’s Ruth here and it’s Christmas Day here in the Twin Cities where our blog team and I live. It’s actually an unusually brown Christmas with just a few leftover snow on the ground, nary a flurry in sight!

I’ve made a ton of Christmas posts over the years, such us the one from 2016 highlighting favorite Christmas movie moments. The last holiday-related post I did was this relay race to list 10 Best Christmas Movies where I picked this 2005 WWII drama Joyeux Noël. 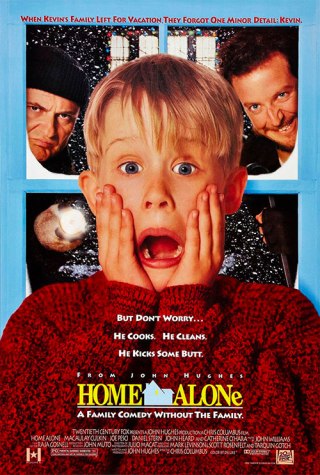 Choosing one “go-to” Christmas movie is tough; it’s one of my favorite times of the year, and I have several movies I have to watch for nostalgia’s sake. If I absolutely have to pick one, though, I’ll go with Home Alone. Sure, the plot doesn’t necessarily hold up today (with current home security systems, smart phones, and today’s airport check-in procedures, I don’t think the story would progress past the first 15 minutes now), but it’s still a classic.

The cast is fantastic, with Macaulay Culkin securing his place as the child actor of the early 90’s (and my first celebrity crush) as Kevin McCallister, Catherine O’Hara and John Heard successfully striking a balance of infuriatingly clueless and genuinely loving as his parents, Kate and Peter, and, of course, Joe Pesci and Daniel Stern hamming it up as the hilarious “Wet Bandits,” Harry and Marv.

The movie is full of memorable scenes and dialogue that are still parodied and referenced even after nearly 30 years, and it’s rich with Chrismas imagery, but the soundtrack is what makes it most enduring to me. In addition to classics like Brenda Lee’s Rockin’ Around the Christmas Tree and The Drifters’ White Christmas (songs that, to this day, I can’t hear without associating them with specific scenes from this film), the score includes music from iconic composer John Williams, and if you don’t get a little choked up hearing Somewhere in my Memory, his big theme for the film, you might be a bit of a Grinch.

I tend to watch Home Alone and Die Hard often during the Christmas season. Throughout my teens Home Alone was a staple during the holidays with my parents and siblings. It’s the first film we watched together around Christmas many years ago. For those old enough to remember, studios tend to leave successful films in theaters for a long time and Home Alone was a massive hit back in the holiday season of 1990. So, it didn’t come out on video until the next holiday season and that’s when I first saw the film with my family.

Another film I tend to watch during the holidays is The Long Kiss Goodnight. A big budget action/adventure with a female lead that I thought was way ahead of its time. Unfortunately, it was a box office dud but I think it has sort of a cult following.

My first favorite Christmas movie is Home Alone (1990), directed by Chris Columbus and starring Macaulay Culkin as Kevin McCallister. Kevin is a bratty but smart 8-year-old boy who’s mistakenly left behind by his his family when they fly away to Paris for Christmas vacation. Kevin at first absolutely loves being home alone, especially away from his bullying big brother Buzz (Devin Ratray) but soon he has to defend his family home from two unsuspecting burglars, Harry and Marv (played respectively by Joe Pesci and Daniel Stern). Since Kevin convinces himself that he is not afraid to be home alone, he decides to defend his family home from the burglars and rigs the house with booby traps to take on the bandits. This is where all the fun ensues, and when Harry and Marv break in, Kevin spring the traps and they suffer various minor injuries. Kevin also learns a lesson when he befriends Old Man Marley (Roberts Blossom), his neighbor who Kevin previously misjudged as being a serial killer who murdered his family. What Kevin learns is that forgiveness is a very important character trait, no matter how late it comes. I think it brings a nice message of love and forgiveness that anyone watching can relate to. The film was also nominated for two Academy Awards: Best Original Score (written by John Williams) and Best Original Song for “Somewhere in My Memory” (again by John Williams). I try to watch this movie at least once during the holidays.

My second favorite Christmas movie is Home Alone 2: Lost in New York (1992), directed by Chris Columbus and with Macaulay Culkin reprising his role as Kevin McCallister. This time, Kevin is little order, a little smarter but also a whole lot more likely to get lost by his family.

This time, Kevin and his family decide to take a trip to Florida, but because of a power outage, their alarm clocks don’t wake them up in the morning which makes them late for their flight. In all of the rush and confusion, Kevin ends up taking the wrong plane and instead of Florida, he ends up in New York City. Once there, instead of freaking out, Kevin decides to make the most of it and to tour the city. Meanwhile, the “Wet Bandits”, Harry and Marv (Joe Pesci and Daniel Stern reprising their roles), have traveled to New York City after escaping during a prison riot and have a new name for themselves: the “Sticky Bandits”. Kevin goes to Central Park and meets a homeless woman (Brenda Fricker) feeding the pigeons, but gets scared because she doesn’t talk and has birds all over her. He then goes to the Plaza Hotel, where he uses his dad Peter’s credit card to check in. One of the most poignant but heartwarming parts of the movie comes when on Christmas Eve, Kevin visits a toy store where he meets its philanthropic owner, Mr. E.F. Duncan (Eddie Bracken). Kevin learns that the proceeds from the store’s Christmas sales will be donated to a children’s hospital, and provides a donation.

As a token of appreciation, Mr. Duncan offers Kevin a pair of ceramic turtledoves as a gift, instructing him to give one to another person as a sign of eternal friendship. Kevin goes back to Central Park to apologize to the Pigeon Lady, and give her his other half of the pair of ceramic turtledoves. Of course, he “coincidentally” bumps into the Wet Bandits, who remember him, and then another round of booby traps are set in an abandoned house that use to belong to Kevin’s uncle. The best part of the movie comes at the end when Kevin reunites with his mother at the Rockefeller Center Christmas Tree after he wishes for no presents for Christmas but rather a fast reunion with his family. I love watching this movie back to back with the first Home Alone.

There is nothing better than sitting down with a cup of warm, homemade eggnog and a favorite Christmas movie. My two favorites, perhaps predictably, are polar opposites. I’m nothing if not inconsistent. 😉 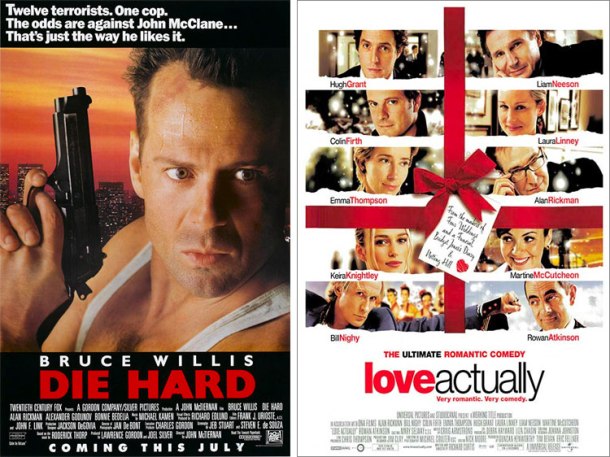 A viewing of Die Hard (everyone’s favorite is it or isn’t it this year: spoilers, it is) followed by a viewing of Love Actually always get me into the Christmas spirit.

Wishing all of our readers a Happy Holiday season, filled with a family that looks out for you and a love story that is worth telling year after year. Yippee Kai Yay!

For me, my go-to Christmas movies have remain the same over the years and it’s one I can watch any time of the year. I’m a self-professed Anglophile and a huge fan of Richard Curtis’ work (Four Weddings and a Funeral, Bridget Jones’s Diary, Notting Hill and Love Actually). In fact, one of my all time favorite Christmas-themed episode in a TV series is The Vicar of Dibley’s Christmas Special that I’ve highlighted in this post.

So it’s no surprise that Love, Actually is one I can watch time and again, especially during the holiday season. I love that Curtis’ able to balance pathos, irony and absurd humor so perfectly in this scene set in a shopping centre during the hustle and bustle of the Christmas holiday. Absolute classic.

Now, You’ve Got Mail isn’t exactly a Christmas movie per se, but it has several significant Christmas scenes that I’d like think of it as such. Whenever I’m feeling nostalgic and a tad sentimental during the holidays, I’m usually in the mood to watch this Nora Ephron classic. This scene in particular often gets me teared up… I love the setting itself of a winter day in NYC with the sparkling and festive Christmas tree, but it also captures the sentiment of feeling lonely and missing the one you love so perfectly. It’s a beautifully-emotional scene that shall always remains timeless.

So friends, now that we’ve shared ours…

… tell us your favorite or go-to Christmas movie(s)!