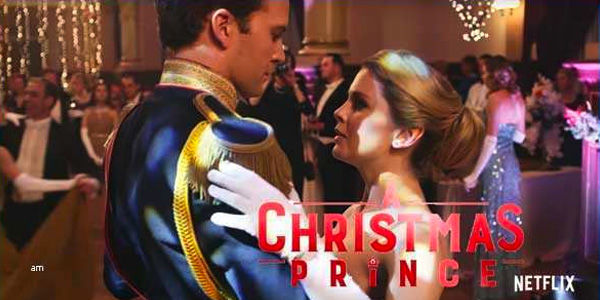 When a reporter goes undercover as a tutor to get the inside scoop on a playboy prince, she gets tangled in some royal intrigue and ends up finding love – but will she be able to keep up her lie?

Ok so this movie was recommended to me by a dear friend and fellow Jane Austen fan a year ago. Though yes I do enjoy period dramas, especially the Austen or Brontë variety, I had trepidation about this one as it has that ‘so bad it’s good’ vibe. Well, I was absolutely right!

Honestly I’m amused by how popular these Christmas romance movies are which have been Hallmark/Lifetime specialty. I’ve never been a fan of them, but looking at dozens of them on Netflix, there’s clearly a huge market for these types of movies.

Though The Crown proved to be one of the most successful Netflix original shows, do NOT assume this one has the same quality just because it involves the royals. Set in a fictitious foreign land called Aldovia, it’s basically every aspiring young American magazine journalist’s dream (or nightmare??). Amber Moore (Rose McIver) was unexpectedly sent by her boss to cover a press conference of Aldovia’s crown prince Richard (Ben Lamb, a Brit version of Taylor Kitsch). The young prince is a rumored playboy who’s been partying all over the world instead of preparing to take the throne following his father’s death. Now, we’d understand the appeal of a rich, good looking bad boy with a foreign accent, especially to a naive girl from a small town in Minnesota (yep, I didn’t make that up!). Well except that Richard isn’t quite the sexy bad boy we expected, and soon we learn he’s actually a really, really good guy. I mean heck, according to his little sister Emily (Honor Kneafsey), his favorite pass time is practicing archery in his palatial garden.

Now, the storyline is actually quite amusing. The plot involves a secret identity, a mysterious poem and a pair of deceitful villains ready to snatch the throne, what more could you want? At 92 minutes however, the movie moves at a relatively breakneck pace that there’s barely any time for character development at all. But who has time for character development when there’s not even room for a sensible narrative? Apparently the Kingdom of Aldovia has zero concern for security, not a single bodyguard for their future King (who rides from the airport in a cab!) and none in the entire palace that Amber could easily sneak in and wander off (even most houses in Minneapolis suburbs has security cameras!).

Once Amber is in the palace, the level of incredulity is off the charts. She manages to fool everyone, including the seemingly discerning Mrs. Averill, palace secretary/head of communication (if you’re a Superman fan like me, you’d be amused by the presence of Sarah Douglas who played Ursa), that she’s in fact a tutor hired by the palace. Little Emily, who’s confined to a wheel chair due to spina bifida, immediately warms up to Amber (despite having driven her previous governesses away). Suddenly their instant besties and baking Christmas cookies together. Their friendship is utterly unconvincing, but of course it’s written in a way so the story can just move along to the actual romance.

Now, speaking of the romance, I’d be willing to forgive a lot of things in this movie if at least the romance is swoon-worthy. Unfortunately, I think it’s the biggest fail here as there’s simply zero chemistry between the two leads. Prince Richard is so wooden and awkward (not Hugh Grant awkward mind you, which can be endearing). Heck, those Nutcracker prince toy/ornament hanging around your house right now is likely more expressive than this guy!

I actually recognize Ben Lamb from the exquisite BBC/Starz series The White Queen and he’s far memorable there in a small supporting role. I had never heard of the New Zealander McIver before, but I’m willing to give her the benefit of the doubt that she’s a much better actress in a more compelling role. Here, neither of them is given much to do in a formulaic and decidedly-schmalzy script by Karen Schaler & Nate Atkins, and Alex Zamm‘s direction is serviceable at best. But I think the pair still fare better than the villainy-duo Simon (Theo Devaney) and Lady Sophia (Emma Louise Saunders) who are more annoying and lame than possessing any real threat.

The royal kerfuffle involves even more identity issues, on top of the fact that Richard has no idea who Amber really is, there’s a scenario questioning whether the Prince is the rightful heir of Aldovia. Those are pretty heavy subjects in a different, more substantial movie, but here everything just resolves itself nicely and conveniently. Richard doesn’t even have to change his expression at all throughout this whole ordeal. I rolled my eyes at the decidedly Bridget Jones-esque wintry finale complete with Christmas lights, snow falling and kissing.

I have to say though I had a big grin on my face when the movie ends. As far as feel-good rom-com goes, A Christmas Prince does have that warm & fuzzy quality if you’re willing to accept it for what it is. Incredulous, extremely predictable and even a little insipid, yes, but it’s also kind of sweet with its own kind of charm. I think young girls would love this flick, just like I did growing up watching those oversimplified Disney Princess movies. Come to think of it, Prince Richard’s royal garb looked exactly like Prince Charming’s in the animated Cinderella! Shot in Romania, the movie looks quite beautiful, and Netflix sure spends money creating the Aldovian castle and the quaint little town. If only they’d actually spend more money and time developing the story and characters instead.

Ok so apparently this movie is SO popular that Netflix has spawned a sequel! [oh lucky me!] So yeah I definitely will try to see The Royal Wedding and see what other shenanigans Amber would get herself into (and if Richard manages to actually conjure up a different expression this time around) 😉