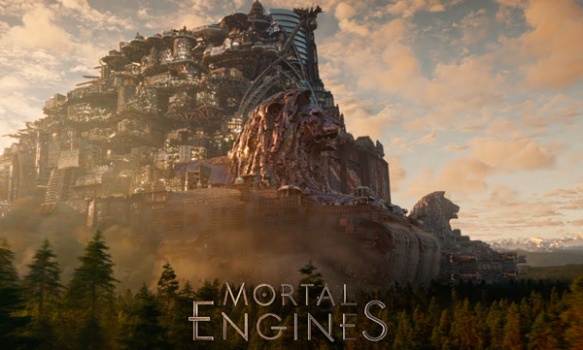 [This review may contain plot details that could be considered spoilers, proceed with caution]

When I heard that there was a movie was coming out, produced by The Lord of the Rings trilogy and The Hobbit director Peter Jackson, I was naturally excited and expected to be entertained on a massive scale. This movie coming out was Mortal Engines, a post-apocalyptic thriller directed by Christian Rivers and with a screenplay by Fran Walsh, Philippa Boyens and Peter Jackson. The film would be based on the novel Mortal Engines by Philip Reeve and star well known Australian-English film and stage actor Hugo Weaving. The film would be set in a post-apocalyptic world where entire cities have been made mobile by them having wheels and a motor, and there would be cities that prey on one another.

It sounded promising so I thought I would give it a go. I sat back in the theater and spent the next 128 minutes of my life being shown special effect after special effect, with very little character development or explanation of an overly complicated story to go by. Apparently, the events of Mortal Engines take place hundreds of years after civilization was destroyed by a cataclysmic event, called the Sixty Minute War, and the remnants of humanity regroup and form mobile “predator” cities. One of the greatest of these “predator” cities is the city of London. It is where Tom Natsworthy (Robert Sheehan), a low-class apprentice historian of London lives and Tom has always wanted to be pilot but never afforded the opportunity because of his class status.

Meanwhile, Katherine Valentine (Leila George), daughter of Thaddeus Valentine (Hugo Weaving) who is head of the Guild of Historians and one of London’s elite. She befriends Tom and he shows her his collection of “old tech” that could be used to create powerful weapon that has the capability to destroy cities at an instant. Coincidently, (or not) Thaddeus Valentine is also plotting a mysterious energy project in the re-purposed St Paul’s Cathedral (the landmark that is atop the traction city of London). When a woman named Hester Shaw comes aboard the city of London captures a small mining town called Salzhaken, absorbing its population and resources, under orders of Lord Mayor Magnus Crome (Patrick Malahide). Shaw is revealed to be the daughter of Pandora Shaw, one of Thaddeus Valentine’s arch enemies whom he killed several years back when Hester was just a little girl. Hester tries to kill Thaddeus but Tom Natsworthy stops her and the both find their way off the traction city of London.

Tom and Hester are forced to work together, become imprisoned and get locked in the cell of a small scavenger city who intends to sell them as slaves. In the meantime, Hester reveals to Tom that her mother Pandora was an archeologist who found a piece of old tech which Thaddeus wanted but Pandora would not relinquish, therefore Thaddeus killed Pandora. Hester escaped Thaddeus with only a necklace her mother gave her. Back on the traction city of London, Katherine has grown estranged from her father, learning about his diabolical plans to use a super weapon called MEDUSA that can destroy cities in an instant. Also, Tom and Hester get rescued by Anna Fang (Jihae), a pilot and leader of the Anti-Traction League, a resistance group banding against the moving cities devouring Earth’s resources. Anna Fang is a relentless warrior and also pilots an airship the Jenny Haniver. They take the airship to the airborne city Airhaven, where they meet up with other members of the Anti-Traction League. Their meeting is cut short by a robot named Shrike (Stephen Lang), who was also Hester’s guardian as a child and whom Hester abandoned leaving to avenge the death of her mother.

Desperate to find something to counter the MEDUSA weapon, Tom discovers that Hester’s necklace (the one she got from her mother before she died) contained a crash drive that acts as a kill switch for the MEDUSA weapon. They made their way back to London, taking heavy losses in ships and Anti-Tractionist members. They also find Katherine Valentine willing to help them confront her father Thaddeus and try to stop the destruction of the Shield Wall.

SPOILER (highlight to read) Hester and Anna infiltrate St Paul’s cathedral in London, but Thaddeus Valentine mortally wounds Anna during a sword duel. Hester is able to disable the MEDUSA weapon with her crash drive but Thaddeus Valentine is undeterred in his ques to destroy the Shield Wall and he orders his henchmen to kill the city’s control crew and ram it into the Shield Wall. With Katherine Valentine’s help, Tom uses the airship Jenny Haniver to destroy London’s engine (similarly to what Luke does in Revenge of the Jedi by flying directly into its center and blowing it up). Valentine attempts to flee London but Hester pursues him and with fights him aboard his airship, where he reveals he is her father. Tom rescues Hester and shoots down Valentine Valentine’s ship, where it is crushed when it is run over by London’s slowing tracks. The surviving Londoners, led by Katherine Valentine, make peace with the Anti-Tractionists.

In the end of the movie it is shown that Tom and Hester travel in the Jenny Haniver to see the world. To me this is the classic happily ever after ending that just doesn’t see appropriate as an ending to this epic fight. There are also way too many similarities with the original Star Wars trilogy not to notice. They way Tom wants to be pilot reminded me of Luke Skywalker’s desire to get off Tatooine in A New Hope. The way he ultimately destroys London and the budding romance between Tom and Hester are some other examples of the influence of the Star Wars trilogy in this movie. It became almost impossible not to notice the resemblances between the movies. Unfortunately for Mortal Engines, the characters had almost none of the character development or unique interest that the characters in the Star Wars trilogy had.

Overall, I was unimpressed by the main characters and overly complicated plot. One can only take so much explosions and special effects before one starts losing interest. That was the case with this one, where a movie failed to lift-off, before it even got off the ground. I was most disappointed in the main characters — Hera Hilmar as Hester was not even slightly compelling and passionate. Robert Sheehan was a little better (I first saw Robert in a Twin Cities Film Fest film last year – Ari Gold’s The Song of Sway Lake, where he was a quirky character along with fellow actor Rory Culkin) but here was also rather forgettable as Tom Natsworthy. These two were supposed to be our heroes, but rather they were just another part of the overly-complicated plot. The best character by far was Anna Fang, probably because of Jihae, a South Korea-born singer-songwriter and actress. Her wardrobe made her look straight out of The Matrix and her swagger made her a formidable adversary to Thaddeus Valentine. I would have liked – and expected — a lot more from the likes of Peter Jackson. Sadly, I got very little in return to remember this movie by.

Have you seen MORTAL ENGINES? Well, what did you think?