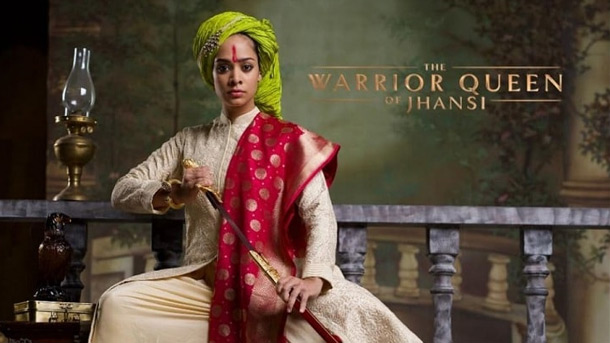 In a year where there are plenty of female-empowerment films being released, this is one that I wasn’t aware it was being made. I saw this on a screener as there was no theatrical screening, and I had seen its trailer a week prior that piqued my interest. I have to admit that I wasn’t familiar with Rani of Jhansi, who garnered a reputation as the Joan of Arc of the East. In the mid 1800s, the tender age of 24, the queen-turned-warrior led her people into battle against the British empire, and became a symbol of resistance against British rule for Indian nationalists. On top of being such a juicy feminist story, this project is especially intriguing to me because of the mother/daughter collaboration, acclaimed artist Swati Bhise as the writer/director and Devika Bhise as the star as well as co-writer.

Partly narrated by Devika herself, the film opens with the story of her life during British Imperial rule. Rani Lakshmibai became queen when she married the Maharaja of Jhansi, but lost her firstborn son and had to adopt a son to secure a male heir to the throne. Though there had been rebellions against the British, Rani was initially reluctant to rebel. But all that changed when The British East India Company forced the annexation of Jhansi, rejecting her adopted son’s claim to the throne upon her husband’s untimely death.

Known as a patron of the arts and educators of Indian culture, Swati Bhise seems more concerned about enlightening the audience instead of telling a compelling narrative. Newcomer Devika Bhise (who I had seen in a small role in The Man Who Knew Infinity) has the stature and temperament to make her believable as a natural-born leader. She may not be the most skilled performer, but there’s enough conviction there that I was invested in her journey. I do think she looks far too glamorous as someone who’s supposed to be more of a tomboy trained in shooting, horsemanship, fencing, etc. 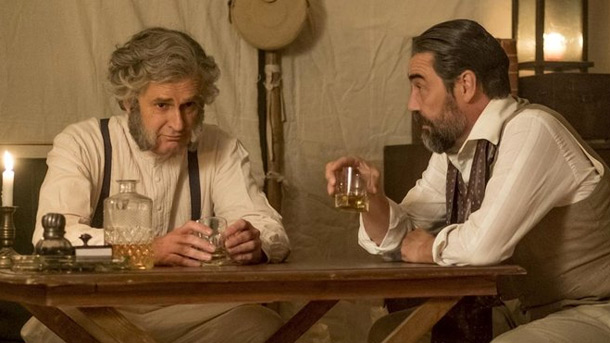 The casting of the British characters is in one word, peculiar. There’s Rupert Everett (British army officer Hugh Rose) sporting a ghastly facial hair as if he’d botched an audition for Abe Lincoln, while Nathaniel Parker is all pomp and snide as the main villain Sir Robert Hamilton. One of my fave Shakespearean actor Derek Jacobi (first PM Lord Palmerston) is only relegated to lengthy arguments with the overly-emotional Queen Victoria (Jodhi May). The film aimed to contrast two different women-in-power who defied the patriarchal cultural expectations of the time, that of Rani and Queen Victoria. The movie showed the Queen having a close friendship with her Muslim Indian attendant Abdul Karim, who apparently is also from Jhansi, only I read that he’s born much later than the events that took place here. 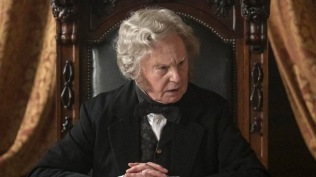 Now, the main issue I had with the film is the general lack of energy and so much emphasis on melodrama rather than action. For a film with ‘warrior’ in its title, there’s barely any action scenes apart from the final sequence. Now, I don’t mind a ‘talky’ war film, if the script were sharp enough to keep one’s attention. Rani said she’s no stranger to battle and has led her army to combat many times. As filmmaking adage says ‘show don’t tell,’ it would be nice to at least see some of that. The all-female soldiers’ training scene looked as if they’re gearing up for a battle re-enactment at a local cultural event, barely convincing as an actual army, let alone one formidable enough to go against the British army. The bland dialogue (whether in Hindi or English) leaves much to be desired as well, sorely lacking in nuance. 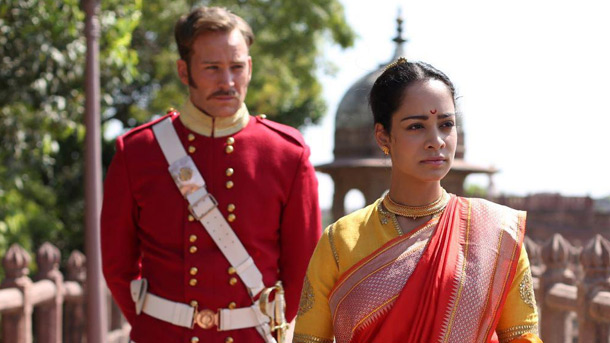 I do appreciate the restraint from interjecting romance into the picture, though the Bhise pair did hint of repressed feelings between Rani and the conflicted Major Robert Ellis (Ben Lamb), a personal friend of her family who tried to maintain peace between Jhansi and the East India company. While he wears the British army uniform, the way he gazes at Rani shows where his true loyalty lies. The two have a pretty palpable chemistry. In fact, Lamb showed more emotions in the 15+ minute scenes he shared with Devika Bhise than he did in the entire two movies of Netflix’s A Christmas Prince! 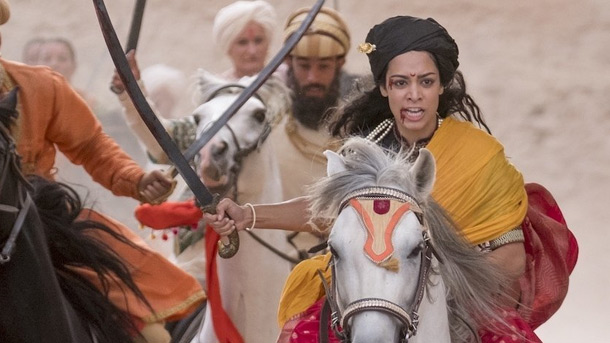 I give props to the filmmakers for their ambitions and valiant efforts. The film looks beautiful, with gorgeous costumes and set pieces. The battle scenes in the third act is pretty decently-mounted, though not quite so epic. I think such a phenomenal freedom fighter deserves a much more thrilling depiction, but I’m still glad this film exists. As a film that’s meant to inspire, it did make me want to learn more about Rani Lakshmibai. So if that’s the primary intent of the filmmakers, then I think the film achieved that.

Have you seen The Warrior Queen of Jhansi? I’d love to hear what you think.

One thought on “FlixChatter Review: The Warrior Queen of Jhansi (2019)”