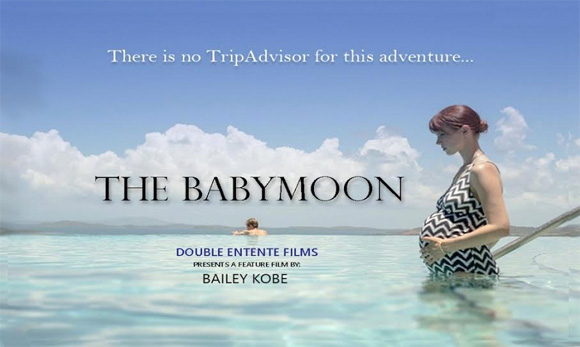 The Babymoon was one of the terrific indie films playing at Twin Cities Film Fest last year. I had missed seeing it on the big screen, but the lovely Kate Sloate over at Double Entente Films was kind enough to send me a screener link.

In the adventure-comedy The Babymoon, a husband in a fragile relationship tries to impress his pregnant wife with a luxurious and romantic babymoon vacation to the most beautiful and exotic country imaginable, which places the couple in the middle of a poorly-planned political revolution!

Featured Cast
This star studded and well known cast brings a multitude of talent and relatable emotion to the big screen.

Q: So how did the concept of the film come about? Did The Babymoon idea come from a personal experience for you?

Most of my career I have adapted novels or plays, but Babymoons have been a hot concept since celebrity couples were announcing elaborate vacations, like Kanye West/ Kim Kardashian, and Prince William/ Kate Middleton, while pregnant.

I never expected to go on one until my wife informed me that we were expecting our first child. I was overjoyed at the news, but then to have this extra vacation to plan, at a time when we should be the most pragmatic, well, it sounded absurd. But after experiencing our trip together, I realized this is a trend that is growing for a reason. We ere able to get away from the daily grind and really talk – not just plan, but really get into the “why” of our plans, and it made us a stronger couple at a time when we needed be on the same page more than ever in our lives. And I wanted to share that.

Q: Would you speak a bit about the casting process? I know Julie was in your first film, but how about the others?

Shaun Sipos was the first person to walk into the casting office for Trace, and he became a high-water mark that no one else could match. Once we knew who our main couple was, we started looking at the rest of the cast, and it was surprising how many actors loved the characters in the script. Big turnouts that my casting directors Kendra Clark and Helen Geier had to manage and because we were an indie, I was lucky enough that when I begged the best actor for each role to be in it, they said yes!

The fruits of which are stunning, if you follow our main cast, you will see that most are now a regular on major TV shows or are finalists when big film castings come up. The same with my first film. Not that I have a magic touch, but I should start promoting myself to actors as the good luck charm to book a major TV series!

Q: It seems that you as well as other cast members were expecting when you did the film. So I presume Julie was really really pregnant in the movie?

Maybe we are all just at that time in our lives, but Julie and I met and had this idea to do the film together while we were both expecting so that both sides of the camera would have a unique attention to emotional detail that we had never seen before. Not only did that create interesting work, but I think we inspired some cast members, because immediately after filming, two cast members, Michael Steger (90210) and Elmer Tollinchi Ruiz (genius polymath who just did a TED talk), had their first children.

And yes, Julie is actually pregnant during some of the filming. We of course, did the stunts and any of the more adventurous sequences months later after baby bonding time.

Q: How was filming in Puerto Rico? What was the biggest challenge in filming all those jungle scenes?

Puerto Rico is absolutely stunning visually, but we wondered if we could find a great crew down there. Thanks to the Puerto Rico Film Commission, we were able to make initial contact with crew who have worked on major shows like Pirates of the Caribbean! And once you have a good crew that understands the challenges of heat, constant rain, dangers of the jungle, etc. you can move forward with confidence!

Q: What was the inspiration behind the political revolution and kidnapping plot?

The political revolution is meant to be simply an externalization of the turmoil in a relationship in the middle of a big life transition. Two sides have strong ideas about how things should go, and without levelheaded discussion it can turn fast!

The kidnapping plot is actually based on real stories I heard while hiking in the Amazon on a 5 day trek into the jungle to see the ruins of a lost city of gold. No joke. Called the Ciudad Perdida. I noticed some heavily armed guards along the way, and my guide regaled me with stories of how they would kidnap groups from time to time and march them around the jungle so they could never be caught. A constant camping trip that would last for months!

Q: There seems to be a familial/parenting theme in your first two features. Coincidence or intentional?

You are right. Great observation. In the first, parenting was a metaphor for the economy. Remember we were in one of the worst recessions in history, but here we are just a short time later, ready to reduce regulation all over again. Will that father remember the consequences of his choices in the past.

And vice-versa, in The Babymoon, the revolution is a metaphor for parenting.

Q: Lastly, who are some of your favorite comedy filmmakers who’ve inspired you?

There is the usual litany of well known writer-directors, but I am particularly inspired by a lot of the TV directors who are finding long term homes on shows right now. I love Pamela Fryman (How I Met Your Mother, The McCarthys), Steven Tsuchida (Inside Amy Shumer, Jim Gaffigan Show), and Hiro Murai (Atlanta).

And of course working under a great like Anthony Russo (Community, Captain America:Civil War, Avengers: Infinity War) was completely revelatory for me.

Q: How did your experience as a mother contribute to your connection with Hanna? Do you think that the role was more or less challenging because of it?

I loved being pregnant. I didn’t have any fear or doubt about anything! I think it was the hormones. I felt blissful the entire time! Well, except when it got hard to sleep, but mostly it was amazing. Hanna on the other hand entered her pregnancy with feelings of doubt in her relationship and her ability to be a mother. Sadly, she wasn’t receiving the happy hormones that I had. Perhaps the only sort of anxiety I had was ‘when will I be able to get back to work and how will that work with Tasman being dependent on me.’ I booked my first job 10 weeks postpartum and shot ‘Babymoon’ at 6 months postpartum. Fortunately, I have a very supportive husband who brought my son to set for nursings or bottle fed him while I worked.

Q: Hanna went through a very challenging transition into parenthood with Trace. How do you think new parents can relate to and learn from this?

i imagine it’s very common to have hanna’s feelings of doubt, fear and stubbornness to think she can do it all by herself….which I’m sure she could have but, what she learned was to allow others in. To be a part of the community and help each other through everything. We could all do it by ourselves, but we would be doing ourselves and our children a disservice.

3. We’ve heard you were pregnant in the jungle. You’re amazing! What was that like?

Well, it was amazing because I loved being pregnant and I love the jungle!!

4. We’ve been hearing a lot from mothers on set who are doing a kick-ass job of being a new mom and an actress. Do you think that the industry is changing to be more accepting? What do you think Hollywood can do to improve this process for new moms?

I think it really depends on who you work with. Obviously, with Bailey it was great! He had a full understanding of what I needed…like 20 minute every 4 hours to pump in a Jeep in the jungle….or whatever 🙂 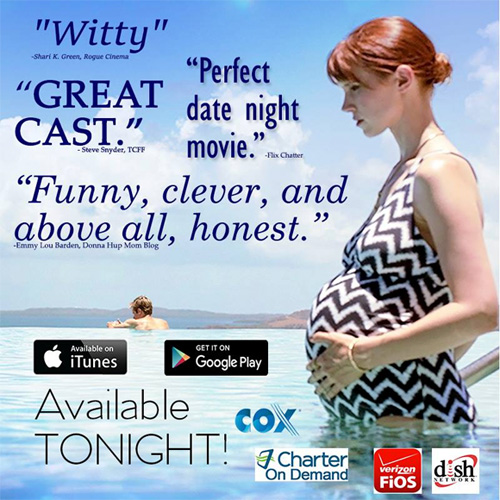 Thanks so much Kate and Bailey!
It was lovely meeting you at TCFF last October,
hope one day our paths would cross again!