How’s your weekend everyone? It’s been a while since I did a roundup post, but I figure it’s a good way for me to ease my way into blogging again. It’s been a particularly gratifying week as I saw two of my highly-anticipated films, Loving and Hunt For the Wilderpeople. As Winter has officially arrived, we pretty much hibernated this weekend so my hubby and I saw The Little Prince on Netflix Saturday night.

Below is my mini reviews of two of the films I saw this past week, plus quick thoughts on the New Zealander adventure comedy…

Hunt for the Wilderpeople

I became a huge fan of Taika Waititi‘s work since the hilarious vampire mockumentary What We Do In The Shadows. Well, he’s come up with yet another riotously-funny movie that could practically double as a travel video for New Zealand!

I will do a full review of this later in December, but right now all I can say is… RUN, don’t walk to rent this movie!! I’m gutted that I missed this on the big screen, not sure that it even had a theatrical release here in MN. In any case, I enjoyed the heck out of this one. LOVE the unlikely duo of veteran actor Sam Neill with newcomer Julian Dennison, a riotous 14-year-old NZ child actor with an amazing comic timing and screen presence. He’s inspired me to do a top 10 list of great 2016 performances by kid actors, so stay tuned for that!

Richard and Mildred Loving, an interracial couple, are sentenced to prison in Virginia in 1958 for getting married.

This film couldn’t have come at a better time, as America is surely in tumultuous times right now. It seems appalling that interracial marriage was still illegal in some states fifty some years ago, but have we really come that far since? The latest film from Jeff Nichols is beautifully-told, graceful and affecting as the filmmaker focused on the couple themselves instead of making a political statement. Yes of course the film has a major political and social implication, as the Supreme Court decision on Loving v. Virginia put an end to all miscegenation laws in 1967. But at the end of the day, the story is about two human beings who loved each other and wanted to raise a family together.

Both Ruth Negga and Joel Edgerton portrayed Mildred and Richard with such quiet grace and sincerity. It’s an understated performance that speaks volumes and conveys the tension as well as poignancy of what they went through. For someone withe the name Loving, Richard surely lives up to that and it’s truly a beautiful marriage built on not just love, but mutual respect. Michael Shannon has a small–but–memorable cameo as a LIFE magazine photographer who took the iconic shots of the couple as they simply hang out in their home, watching tv, playing with their kids, etc. There’s also Marton Csokas as the ‘villain’ of the story, the Virginia sheriff who arrested them.

The script, direction and performance all work beautifully to bring the Lovings’ story to life. The cinematography and music are beautiful and evocative, it works in transporting us to a certain period of Americana. But it’s the journey of the Lovings that I shall never forget. By making the film about the couple, forgoing court drama theatrics, Nichols made a deeply moving film that connected with me in a refreshingly real way.

A little girl lives in a very grown-up world with her mother, who tries to prepare her for it. Her neighbor, the Aviator, introduces the girl to an extraordinary world where anything is possible, the world of the Little Prince.

Truth be told, I’m not that familiar with Antoine de Saint-Exupéry’s The Little Prince, despite it being the fourth most translated book in the world. This is the first animated feature film adaptation of the book, directed by Mark Osborne (Kung Fu Panda), boasting a terrific cast that includes Jeff Bridges, Rachel McAdams, Marion Cotillard, Ricky Gervais, etc.

I have a penchant for these kinds of imaginative stories, one that blends in reality and fantasy set in striking visuals. The little girl’s relationship with her overly-ambitious mother is an interesting commentary about the overly-structured life of an adult vs the wide-eyed openness of a child exploring the world. I have to admit it took me a while to get into this one at first, even after the girl (Mackenzie Foy, who was in Interstellar) meets the narrator, an elderly man (Jeff Bridges) who told her the tale about the aviator and the little prince. I’m often lost in the beauty of the visuals, especially the stop-motion scenes in the desert created using paper. It’s absolutely gorgeous with a dreamy quality, but yet for some reason I couldn’t connect to the story nor the characters as much as I wanted to. I wonder if at times there’s a case of ‘lost in translation’ here from the original story. 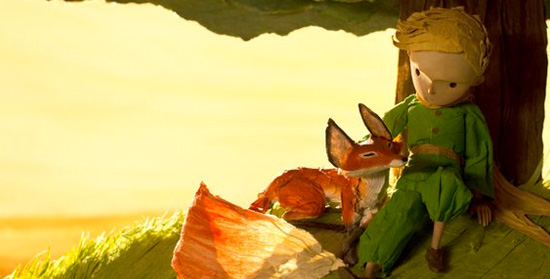 There are philosophical quotes that resonated with me however, such as “One sees clearly only with the heart. The essential is invisible to the eye.” I also enjoyed the music by Hans Zimmer and Richard Harvey, which nicely complements the ethereal, watercolor look of the film. It certainly is worth a watch, for sure it’s a technical/visual marvel, even if the film overall isn’t as breathtaking as I had hoped.

I’ve written up my full review of Doctor Strange coming later this week. My hubby and I saw Arrival last weekend, right after we’re back from our Zion/Vegas trip, which was truly one of the best, most affecting sci-fi film I’ve seen in a good while.  I plan on writing my review of Arrival and Moonlight (one of the two October Movies of the Month!) later this week. I’ll be seeing the new Brad Pitt/Marion Cotillard spy drama Allied tonight, and if the snow storm doesn’t wreck havoc on traffic, hopefully I’ll be seeing Hidden Figures tomorrow night! Oh and my new blog contributor Laura S. also gave me a review of Fantastic Beasts and Where to Find Them, so stay tuned for a slew of new reviews in the next few weeks!

So did you see anything good this weekend? If you’ve seen any of these movies, I’m curious to hear what YOU think.

28 thoughts on “Week In Review: Hunt For the Wilderpeople + Loving + The Little Prince”