I had been wanting to see this movie for ages but for some reason I never saw its theatrical release in my neck of the woods. Even the synopsis and the trailer had me in stitches. Well, the movie itself more than lived up to the hype, it’s so well worth the wait! In fact, the reason this review kept getting delayed is because I kept getting distracted by watching the clips of this on Youtube and they made me laugh every single time.

The idea of a mockumentary about vampires living in modern society is so brilliant and makes for a perfect comedy material, so I’m surprised nobody has made it before. Well I’m glad that these New Zealand comedians did as I can’t imagine anyone else portraying these immortal vampires now. The only person I recognize is Jemaine Clement, one of the Flight of the Conchords comedy band, and he plays one of the four flatmates living in Wellington, NZ. In the opening sequence, we learn that the vampire flatmates have invited a documentary filmmaker to chronicle their lives, hence the title, and they’ve been given some kind of protection so that they won’t become victims like most humans invited into their homes. “Some interviews with some vampires” is the movie’s tagline, an obvious reference to a popular 90s vampire drama based on Anne Rice’s books. 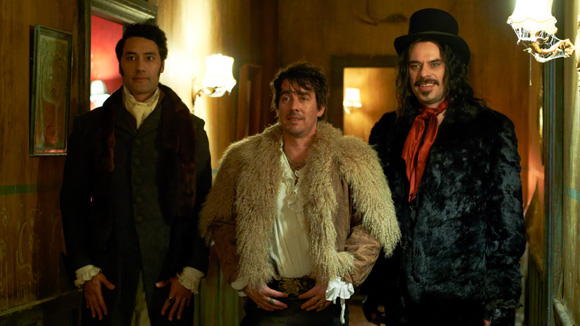 It’s so much fun to spend two hours with the trio, Vladislav (Clement), Viago (Taika Waititi), and Deacon (Jonathan Brugh). There’s also Petyr (Ben Fransham), an 8000 years old Nosferatu-lookalike who lives in the basement instead of upstairs with the other three. Viago is like the mom in the family, he’s trying to keep the flat as organized and neat as possible, insisting that his flatmates line the floor and walls with newspapers before they feast on their victims. Of course it’s not always easy, one scene showed Viago accidentally biting the main artery of his victim, causing blood to spurt and splatter all over the room and making a huge mess. This is just one of those hysterical dilemmas these immortal creatures have to deal with living in modern society. All the daily stuff we take for granted, such as being able to see our reflection in the mirror when we get dressed, enjoying the sunlight, etc. are problematic for these vampires and the movie explore those in such a hysterical way.

I thought that the movie is going to consist mostly of random scenes of these vampires doing daily human chores and other vampiric shenanigans, which would’ve been okay for me considering how hilarious these actors are. But there’s actually a decent plot here, starting with Nick (Cori Gonzalez-Macuer), a human lured to become their food who ended up being turned into a vampire. Things start go awry when Nick carelessly break every vampire rules and walk around announcing his new identity. But the most hilarious part is when he starts inviting his human friend Stu (Stuart Rutherford) to hang out with his vampire mates. All the scenes involving Stu is a hoot, especially when he teaches them technology and social media, much to the delight of Viago and the gang. It’s even funnier as he’s got this deadpan expression throughout.

This movie has become one of my favorite comedies of all time. Right up there with The Gods Must Be Crazy, Top Secret! and Hot Fuzz. Comedies are so subjective I guess so what some people find funny might not be the case for others. For me, I love great writing and fun characters on top of the slapstick stuff, nothing too crude nor vulgar. What We Do in the Shadows delivers on that front, such a breath of fresh air compared to a lot of raunchy-but-unfunny Hollywood comedies of late. Props to Clement and Waititi who collaborated as writers/directors, as well as the terrific cast that bring this comedy to life. There are just sooo many memorable scenes and it’s so darn quotable.

“Yeah some of our clothes are from victims. You might bite someone and then, you think, ‘Oooh, those are some nice pants!’.”

“I go for a look I call dead but delicious.”

Seriously, there are hundreds of funny one liners and it’s funnier when you see them in context. The script is so zany and sharp-witted, and the writers obviously knew enough about the whole vampire mythology and stereotypes to turn them on its head. I’ve gotten the Blu-ray and I know it’ll get a ton of play in my house. Even the deleted scenes are a hoot! I don’t normally care for sequels but I sincerely hope Clement and Waititi would work on a sequel for this, as I can watch these characters bicker with each other for hours on end. I’d think this idea would make for a great TV series too, so hopefully that would happen given how well-received this movie has been.

Have you seen What We Do In The Shadows? Well, what did YOU think?