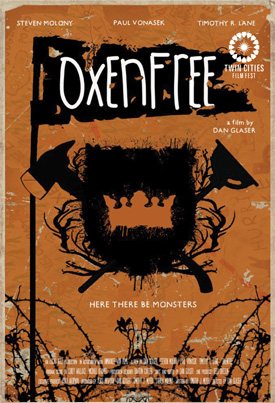 Many of us may remember that expression we used at the end of our games of Hide and Seek – “Olly, Olly, Oxenfree!” The longing to return to juvenile games and stories is a theme in “Oxenfree,” the feature film that had its world premiere at the Twin Cities Film Fest last night. I had the pleasure of being in attendance with the director (Dan Glaser) and actors Steven Molony (Aaron), Paul Vonasek (Roy) and Timothy Lane (Benjamin). Undoubtedly there were many family and friends in attendance as the cast and crew received loud applause when the ending credits rolled.

Oxenfree tells the story of three estranged foster brothers who return to the family cabin to rediscover the ruins of their childhood kingdom “Oxenfree.” Shot in the Fargo/Moorhead area, I appreciated the beautiful fall scenery throughout the movie. As it only features three actors (aside from a brief appearance of Kelli Breslin as Katie, Aaron’s girlfriend), the strength of this movie really comes from the actors’ camaraderie. It’s obvious these young men enjoy working together and their affinity for each other makes their characters more believable.

The one quibble I had with the film was that it didn’t seem to be able to decide whether it was a comedy or a drama so at times it seemed stuck in a muddling middle. (Even the actors at times looked confused about how to play a scene.) After Roy reclaims his “throne” (an old toilet) in the middle of the forest, he takes a cell phone call from his wife. And then moments of levity like this diverge into a medical drama concerning one of the other brothers. The production value of this movie was there, it just seemed like the script needed a little more work.

Am I saying I didn’t enjoy the film? I am not. One of the strengths of a film fest is to see movies at many different levels of development. During the post show Q&A, Timothy Lane (Benjamin) talked about how this was the first film he has acted in and discussed the technical side of learning to act on camera. Paul Vonasek also shared how they came up with part of the plot – “We didn’t really look alike but we wanted to do a movie together so that’s how we came up with the idea of being foster brothers.” Oxenfree isn’t going to change your life but was it an enjoyable way to spend a cold and rainy evening? Yes.

‘The Eyes Of My Mother’ Review 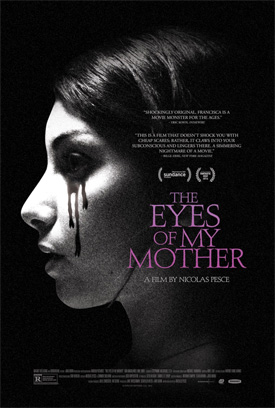 Writing and directing a film that is both beautiful and horrifying isn’t easy- especially on the first try, and especially at the young age of 26 (which makes me, at 28, feel like a total underachiever). But newcomer Nicolas Pesce has managed it with his already critically-acclaimed movie, The Eyes of my Mother. While it has its flaws, it is an incredible debut, and it’s a promising start to what will hopefully be an illustrious career for Pesce.

The Eyes of my Mother is about Francisca (Kika Magalhaes), a young woman who tragically loses her mother an early age, and, through the trauma and following isolation, develops an unnerving hobby. I won’t say much more, for fear of spoiling the plot, but I will say that Francisca’s mother used to be a surgeon, and the two of them would practice dissections on cows, so the girl knows how to use a knife. I’ll let your imagination fill in the rest from there. 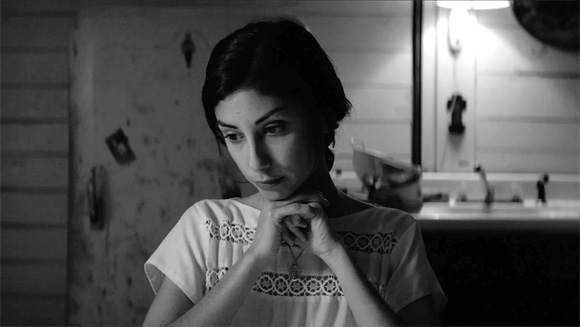 The movie begins on a tense note, and is able to hold that suspense throughout most of the film, thanks to both Pesce’s skillful directing and the cast’s strong acting. There is very little background music, which creates an unnerving atmosphere. There are frequent shots from the first-person perspective and just over the actors’ shoulders, obscuring their faces, creating both an air of uncertainty and an opportunity for the actors to demonstrate their acting abilities by relying solely on their line delivery. Shooting the film in black and white was an excellent choice as well; it enhanced the shadowy scenery, and the starkness made the tone even more unsettling. 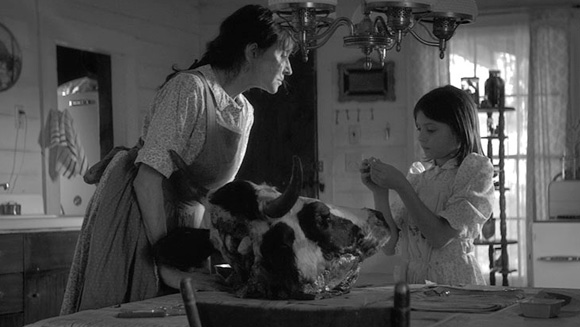 That’s not to say the movie is without flaws. It’s a relatively short film, clocking in at only an hour and sixteen minutes, which doesn’t allow much time for character development- and in a movie where so much of the film centers around one character, it was especially needed. The short runtime also meant certain plot points weren’t properly explained. Ambiguity in horror movies can be a powerful tool, but too much can confuse the audience and take them out of the experience.

While The Eyes of my Mother isn’t a perfect movie, it is still a stunning first film from a promising young talent, and I look forward to seeing more from him.

’Moonlight,’ ‘Blood Stripe’ and ‘Iron Will’ lead 2016 awards contenders…
many finalists are set to screen during TCFF’s closing weekend!

Check out some of the studio features
playing in the final days of TCFF!