I gotta admit, I’m not much of a Western fan. Though interestingly enough, I’ve liked three western remakes in the past decade: 3:10 To Yuma, True Grit and then this one. Confession: I have NOT seen any of the original films. Now, people who have seen the original films would likely have a different opinion about the remake. For me, I guess I get the benefit of seeing the story for the first time, with nothing to compare it with.

The main draw for me to see this is the cast. Reportedly director Antoine Fuqua pitched the film to financiers with ‘Denzel Washington in all black riding a horse.’ Well if I were one of those financiers I’d definitely say ‘hell yeah’ to that, and that is quite a sight to behold. As with a lot of Westerns, well those I’ve seen anyway, we see the lone hero riding into town on his horse before we finally see his face. It’s interesting that Denzel being Black in that era naturally drives extra attention from townsfolk, even more so as he goes into a saloon. He’s definitely got the natural charisma, and here he’s got that cowboy swagger to boot!

In the opening scene, we see a merciless and cruel industrialist Bartholomew Bogue (a slimy Peter Sarsgaard) terrorizing and murdering people in the tiny town for their land and mines. Poor Matt Bomer barely lasted past the opening credits! The first half pretty much is a recruiting process as Denzel’s Sam Chisolm gathered enough men to fight against Bogue and his men. First one he recruited is Josh Faraday (a great name that fits Chris Pratt nicely), a strapping cowboy w/ a devil-may-care attitude. Next  are Goodnight Robicheaux (Ethan Hawke) and his partner in crime Billy Rocks (Byung-hun Lee), tall-dark-and-handsome Mexican outlaw Vazquez (Manuel Garcia-Rulfo), skilled tracker Jack Horne (Vincent D’Onofrio) and lastly, Comanche warrior Red Harvest (Martin Sensmeier). Each member of the awesomely-monikered gang has their own special skills, and given that Fuqua employed actors of various races, the skill is tailored to their heritage. Billy Rocks is a knife-wielding expert and Red Harvest is a master in archery, etc. but of course all of them are adept with guns as well. Out of the seven riders, naturally Denzel is my fave. Pratt looks like he’s having a blast here and I really like the dynamic between Hawke and Lee as the unlikely BFFs. I also couldn’t help swooning over Garcia-Rulfo, I sure hope to see more of Mexican actor in the future.

…
I have a great time watching this thanks to the eclectic cast. Apart from the calm and wise Chisolm, they look like they could be killing each other too and the banters are pretty fun throughout. Naturally this is not a character-driven piece, so details such as what exactly happened to Robicheaux is unclear. The only one with somewhat of a backstory is Chisolm, which isn’t revealed until the very end. Given that it’s 2016, writers Richard Wenk and Nic Pizzolatto updated the story with a strong woman in the core of the conflict. Emma Cullen (newcomer Haley Bennett) isn’t so much a damsel in distress, as she actively seeks out Chisolm to help avenge her town and she refuses to just sit and watch the battle unfolds. I think the weakest link here is Sarsgaard who is more annoying than menacing. Even the last mano-a-mano is rather lackluster as he barely hold a candle to Denzel in terms of charisma and screen presence. 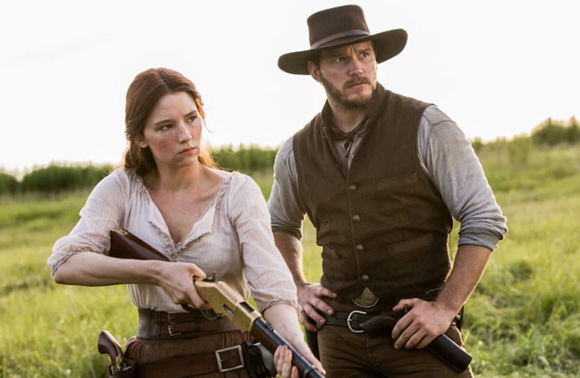 The action and shootouts are what one would expect, peppered with humor and one liners, mostly from Pratt. Some of the action is preposterous, as some of the heroes manage to stay alive despite being shot several times but they can take down their enemies with a single bullet. But hey, I was expecting a fun action comedy instead of a deep, story-driven piece, so I’m not exactly disappointed. What it lacks in genuine suspense it’s more than made up by the well-staged action and stunning cinematography. I sure hope Mauro Fiore‘s name will come up during award season as he’s done amazing work here that made me wish I had seen this movie on IMAX! He’s a longtime Fuqua collaborator who’s also the DP for Avatar.

I have to mention the fantastic music as well. The late James Horner wrote seven pieces of the score before he died, so this was his last project. His wonderful score still has a bit of the iconic theme by Elmer Bernstein, and I love that they used the rousing original score (which I called the Marlboro score as it’s used in its commercial) at the end of the movie. I’m definitely going to do a Music Break on it as my hubby and I’ve been listening to the soundtrack all weekend!

I’m glad I saw this movie and it’s one I don’t even mind seeing again. I can’t tell you if it’s as magnificent as the original, but if you’re looking for a fun ride full of entertaining characters, you could do far worse than this remake. In fact, my hubby and I are contemplating about seeing this again on an IMAX screen, it just might be the first Western I’m willing to see twice on the big screen!

Have you seen this movie? Well, did you like it more or less than I did?