On Monday night I heard that Mr. James Horner was unaccounted for when a plane registered to him crashed in St. Barbara, CA, I prayed he’d turn out ok. I started listening to his music all night long and was amazed at how many of them I love. Before I went to bed, I already picked my top 10 list thinking that I would dedicate this week’s Music Break post to him as a tribute. When I turned on my iPad in the morning, I read the news came that the 61-year-old composer was the pilot of the plane and he was indeed killed.

It saddens me to hear about his tragic death. He’s one of my favorite composers of all time… so many of his scores resonated with me. He’s such a phenomenal and versatile composer. Looking at his filmography and listening to a bunch of his work, there are a variety of motifs that he used throughout his illustrious career. Even within the same year he could create two VERY different scores that somehow fit perfectly to its respective film (i.e. in 1994 and 1995, see below for the year next to the film title). He’s credited for over 150 projects as composer on IMDb, received seven Oscar nominations and won two for Titanic (for Best Original Song and Best Dramatic Score).

There’s such a beautiful, romantic and ethereal feel about some of his dramatic scores like Legends of the Fall and Braveheart, but I also love his more energetic and up-tempo scores, i.e. Rocketeer. He can convey the sentiment and tone of the film so perfectly. I think some of my favorite scores are the ones that are so evocative that it take you to another time and place. I’m always taken back to the glory of the doomed ship whenever I hear Take her to sea, Mr Murdock score. 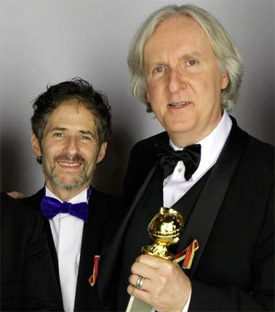 Horner collaborated several times with James Cameron and he wrote a nice tribute to him posted on THR. He shared his experience working with him on composing for Titanic, “I asked if he could write some melodies. I believe that a great score really consists of something you can whistle. If that melody gets embedded in your mind, it takes the score to a different level. I drove over to his house and he sat at the piano and said, “I see this as the main theme for the ship.” He played it once through and I was crying. Then he played Rose’s theme and I was crying again. They were so bittersweet and emotionally resonant. He hadn’t orchestrated a thing, and I knew it was going to be one of cinema’s great scores. No matter how the movie turned out, and no one knew at that point — it could have been a dog — I knew it would be a great score.”

As my tribute to the late composer, here are 10 of my favorite scores from James Horner (in order of release):

Thank you Mr. Horner for your amazing work…
your music shall live on…