The fact that I’ll be flying to Chicago this afternoon certainly adds an extra spring in my step. I’ve attended the Minneapolis Wizard World event before, but this year is the first time I’ll be attending the Comic Con in Chicago! It started yesterday and it’ll go all the way through Sunday at the Donald E. Stephens Convention Center.

The programming is pretty massive for all four days, but I can only attend one day as we’re also visiting friends who live in town. We’ve decided that day’ll be Sunday!

A SAMPLING OF PROGRAMMING HIGHLIGHTS:

I gotta admit the one panel I am super psyched about is THIS: 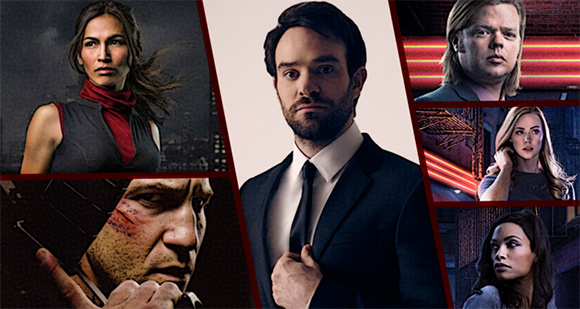 I LOVE the series and I’m excited to see the cast in person. It’s always fun to see the chemistry of the actors off-set, and this is an ensemble that I absolutely love. I mean I like every single one of the actors and what they bring to each of their roles.

Unfortunately The Punisher’s Jon Bernthal isn’t going to be coming to the event due to filming 😦 I had just seen the season 3 teaser trailer last week and now I’m salivating for it even more!

…
I was really hoping to see Luke Cage‘s Mike Colter also but he too, had to cancel due to filming. Same with Sebastian Stan who was originally scheduled to appear in Chicago. Ah well, I suppose these things happen and they do have work they’ve committed to.

In any case, the Luke Cage trailer is looking good! I know what I’ll be bingeing in late September 🙂

Using the force with Carrie Fisher

Now, I’m not a massive Star Wars fan but Carrie Fisher sounds like a hoot from what I’ve seen in interviews. I wonder if she’ll bring her beloved dog Gary to the panel. It’ll be fun just to see her share some of her experiences as part of such a behemoth franchise. And who knows there might be some tidbits about Star Wars Episode VIII! 😉

The truth is still out there

Now, I wish I could make it Saturday as well as I definitely will attend the X-Files panel. I’ve only seen a handful of episodes of the series but I’m a big fan of both lead actors: David Duchovny and Gillian Anderson!

I enjoyed the Gillian Anderson panel last year at WW Minneapolis, but I bet it’d be even more fun seeing David and Gillian together! They seem to have a great chemistry off-screen, and I know David’s got quite a wicked sense of humor.

There’s also a David Duchovny Book Reading on Sunday, as he recently released his second novel, Bucky F*cking Dent: A Novel, following the success of his debut Holy Cow, which landed on The New York Times’ Bestseller List.

Of course half the fun of attending any comic-con is the cosplayers watching!

My hubby will surely have a field day taking pictures of them on the exhibition floor, surely there will be no shortage of Star Wars cosplayers, which seems to be eternally popular.

Have a great weekend everyone. I’ll be sure to post my recap of my day at Wizard World Chicago!

25 thoughts on “Counting down to 2016 Wizard World CHICAGO Comic-Con!”