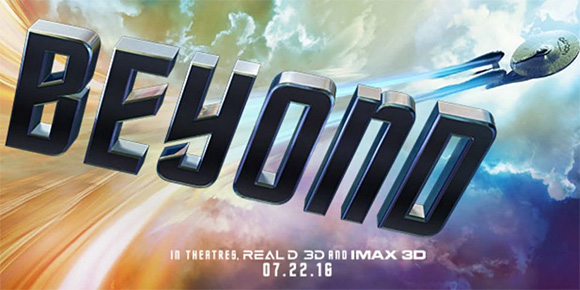 I don’t consider myself a Trekkie, I’ve seen all of the Star Trek films but never got into any of the TV shows. I enjoyed the first two films by JJ Abrams, even the much-maligned Into Darkness. When Abrams decided to jump ship and take over the other space adventure franchise, Justin Lin was hired to direct this third sequel. Lin made his name by retooling the Fast & Furious franchise and those films made millions. Personally I thought he’s an odd choice to take over a sci-fi franchise but thankfully he delivered one of the most enjoyable Summer films I’ve seen so far.

Three years into their five-year mission, the enterprise crew is feeling the grind of their routine space work. As the film opens, Captain Kirk (Chris Pine) is giving back an artifact to a group of alien creatures but it didn’t turn out well as he’d hoped. Later the crews are heading to a new advance space station to get some R & R. While stationing at the new space station, Kirk received a new job offer and contemplating leaving the Enterprise. Before he can decide to accept the new job offer though, there was a stress call from a lone survivor who needs help. Kirk and his crew set out to rescue more lives from danger but as they approach their destination, it turns out to be a trap. In a pretty spectacular sequence, a group of aliens with advance spaceships attacked the Enterprise and broke the ship into pieces. The ship crashed landed on an isolated planet and the crew got separated. Kirk must find his friends and also figure out who these aliens are and their purpose for attacking the Enterprise.

The script by Simon Pegg and Doug Jung is pretty simple, maybe too simple for my liking. The premise is basically search and rescue and lots and lots of action. But they were able to throw in a lot of funny dialogs and lighten up the mood of the film quite a bit. Speaking of action, Lin definitely delivered on that front. The space battles were well-staged and very exciting to watch. If there’s a theater near you that has Dolby Atmos surround sound, I highly recommend you see it there. Lin also was able to move the film along at a brisk pace, never linger on any subplots that might slow the story down.

One minor complaint I have is the way he shot the climatic showdown between Kirk and the main villain. He moved the cameras way too much and I wasn’t sure what was going on. I thought Abrams did a much better job in a similar scene for Into Darkness when Spock and Kahn had their showdown. 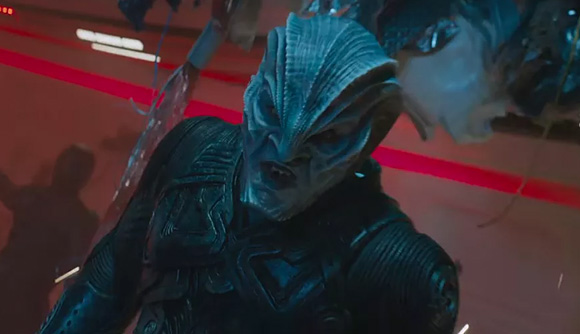 Performances by the actors were great, since this is their third outing, I thought all of the actors look comfortable in their respective roles. Since plot have them separated from each other, many of them got equal screen time. The best pairing to me has to be Spock and Bones, their bickering were fun to watch and the two actors have good chemistry. The weakest link here though is Idris Elba’s villain Krall. He’s yet another one -dimensional evil character whose purpose is vengeance against Starfleet. Elba didn’t have much to do except scream and spouting clichéd evil dialog.

It may not be the best film in the franchise but definitely an upgrade over the too serious Into Darkness. The film contains great action sequences and a touching tribute to the two deceased actors. I’m not a trekkie but I thought this one can be considered one of the best in the franchise.

I wasn’t going to review this one, but seeing that I have quite a different reaction than Ted, I thought I’d post my thoughts on it as well.

Like Ted, I’m not a Trekkie either, but JJ Abrams actually managed to make me interested in the Star Trek Universe with the first film. I also enjoyed the second installment Star Trek Into Darkness that Abrams also directed, and I really dug Benedict Cumberbatch’s villainous turn as Khan. I said in that post that it was a huge improvement over Eric Bana’s role in the first film. Well, unfortunately in this third installment we’re back to another clichéd, one-dimensional villain in Idris Elba‘s Krall, as Ted has pointed out above. It’s a travesty that when they hide incredibly good looking, massively talented actors under such heavy makeup and give them banal dialog on top of it.

It’s no fault of the insanely-charismatic Elba that Krall is such a terrible villain. But he’s so terribly-written it made me cringe. But interestingly enough, the one person I thought would be cringe-worthy turns out to be quite okay. I’m referring to Sofia Boutella‘s Jaylah (who I initially thought was Rihanna), a scavenger who rescued Scotty (Simon Pegg) and took him to her home. Her house turns out to be an early generation Starfleet vessel USS Franklin, and she needs Scotty to help her fix it.

The moments between Jaylah and Scotty are pretty fun. I quite like Jaylah, and she’s given a pretty decent character arc. The movie’s best moments to me are in the the dueling banters, whether it’s Scotty & Jaylah, or Bones & Spock. Karl Urban‘s grumpy-ness is so endearing and he’s got as good chemistry with Chris Pine as he does with Zachary Quinto. The film did boldly go where no previous Star Trek film has gone before in making Sulu (John Cho) gay, though it only amounts to barely a minute of screen time showing him with his husband and young daughter.

Unlike Ted though, I’m not too crazy about the frenetic action sequences. I find it to be too dizzying and goes on far too long. It seems endless to me that my mind started to wander and it actually took me out of the movie. I don’t remember feeling this way in previous Star Trek films, but this one has so much combat scenes and explosions, even the USS Enterprise was blown to bits. There’s also a ton of chase sequences, so I guess I could see why they hire Justin Lin for this movie. During one of the many extended action sequences, I whispered to my husband that this is basically Fast & Furious in Space! The one part I did enjoy was towards the end when they used loud rock music as a countermeasure against the tiny ships ‘swarm’ controlled by Krall.

I guess this movie would satisfy action fans. But for me, I expect Star Trek to be a space adventure drama, more about Starfleet’s journey and the relationships of its crew members. The film touched upon that in Capt. Kirk’s opening monologue, but that’s pretty much it. I guess there’s not much room for characterization amidst the dizzying action, apart from a few fun banters here and there. Even the quiet moments of Spock mourning the passing of Ambassador Spock doesn’t elicit much emotion as it should’ve been. It did pain me every time I saw Chekov on screen though, I still can’t believe Anton Yelchin‘s gone.

So despite some fun moments, overall it’s just hard for me to feel invested in Kirk & co.’s journey this time around. The faster the chase scene the more tedious it becomes for me. Perhaps the movie’s aimlessness has been hinted in the intro voice over of Captain Kirk… “As for me, things have started to feel a little episodic. The farther out we go, the more I find myself wondering what it is we are trying to accomplish” Yep, that’s how I feel as the audience too, Cap. The ending also feels a little too neat, resolved perfectly just in time for yet another episode (read: sequels) in a not too distant future. Not sure I’m too excited for future Star Trek movies after this one.

So what did YOU think about ‘Star Trek Beyond’?