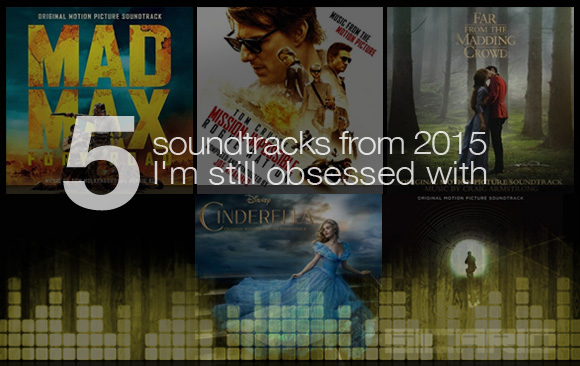 Most people who know me know I have an old school taste when it comes to music. I basically only listen to genres. One is classical music – my radio dial goes back and forth from MPR news to Classical MPR 99.5, and I’m not ashamed that I owned two Sarah Brightman CDs. The other is movie music [natch] My CD changers in my car (I’m dating myself aren’t I?) consist mostly of soundtracks (Moulin Rouge and Sense & Sensibility are on there right now). 2015 have produced some truly awesome soundtracks that I currently listen to a lot, and probably will for years to come. They’re quite an eclectic bunch, just like my taste in films, I like my period dramas to go with the high-octane action.

I had never heard of Junkie XL before but man I LOVE this extremely energetic music that adds so much cool vibe to the movie. It perfectly complements all the crazy action that goes on in the movie and the music IS an integral part of the action as well w/ the guitar guy in red jumper on top of the convoy truck.

Brothers in Arms is one of my fave tracks from the album:

I LOVE Puccini’s Nessun Dorma, which was featured in the fantabulous Vienna Opera sequence early in the film. Well, three of the tracks managed to inject the famous area beautifully and mix it with the iconic Mission Impossible theme. I just LOVE it!!

I also love the music featured in the MI5 trailer by The Fugees from the mid 90s. It works brilliantly with the trailer cut and somehow sounds like it’s made just for this movie!

Far From the Madding Crowd

I’ve already dedicated an entire Music Break post of this one last September and I’m still obsessed with it.

I especially love Carey Mulligan’s rendition of Let No Man Steal Your Thyme, but this opening sequence with the repetitive piano and violin melody has such a beautiful, swoon-inducing quality.

Speaking of swoon-inducing, that’s the one essential ingredient when you’re composing a fairy tale film. Mr. Doyle’s done some of my favorite soundtracks ever, so he’s the perfect choice for this movie. I was just listening to it last night as I was working on my script, as a matter of fact. At times I’d stop and let myself be swept away by the lush & gorgeous music, just like Cinderella was by Prince Kit 😉

I just watched this recently so it’s fresh in my mind. I remember vividly how the ominous score adds so much tension to already ultra-suspenseful scenes. One of the major reasons my nerve was stretched to its snapping point was because of this brilliant music. The Icelandic composer wrote such a perfect music with his minimalist electronic style, it’s as pulsating and heart-throbbing as the film itself. I can’t imagine this movie without THIS music, it’s made all the richer because of it.

I had to include this scene from one of my top 10 films of 2015. The song Diamonds is by Rihanna who I never listen to, but somehow it’s so perfect for this scene. The first time I saw it I actually rewound it as it moved me so much. It captured the sentiment the girls are feeling… every girl, no matter what background they come from, once to get all dolled up and be glamorous once in a while.

Hope you enjoyed this week’s music break. Which of these are YOUR favorites?