1. Since this is Back to School week for many of you, or will be after Labor Day weekend, I figure I’ll borrow the question of this week’s Thursday Movie Picks topic. Since I didn’t participate, I figure I’d name three movie teachers who made an impression on me:

So what’s your favorite teacher(s) in movies?
…

2. September is a boon for film lovers as there are a plethora of film festivals going on. The big ones like TIFF, Venice, Telluride, etc. are going on this month, but this one you might not have heard of: The Deauville American Film Festival (Festival du cinéma américain de Deauville). It started on the day I was born, 1975, and took place in Deauville, the closest seaside resort to Paris in Northwestern France.

I actually heard of this film fest thanks to my dahling Stanley Weber who’s a member of the The Révélation Jury this year. There are tons of my most-anticipated films premiering there as well: Knight of Cups, 99 Homes, Sicario, Everest, etc. I had to laugh at their picks of this year’s honorees though. I mean Michael Bay?? Orlando Bloom?? Seriously?? Though I have no problem that they’re honoring Keanu Reeves though.

What’s your most memorable film and/or moment at a film festival? Local or otherwise.

3. FIRST LOOK of a couple of films I can’t wait to see that I’ve talked about off and on on this blog. First, we’ve got the trailer of the sci-fi romance comedy The Lobster starring Colin Farrell, Rachel Weisz, Léa Seydoux, John C. Reilly and Ben Whishaw.

In a dystopian near future, single people, according to the laws of The City, are taken to The Hotel, where they are obliged to find a romantic partner in forty-five days or are transformed into beasts and sent off into The Woods.

The trailer made me laugh so hard! The idea is absolutely bonkers which would make for an amusing comedy, so hopefully the funniest bits aren’t all in the trailer. I’m especially curious to see Weisz, Seydoux and Whishaw who I normally associate with serious films. 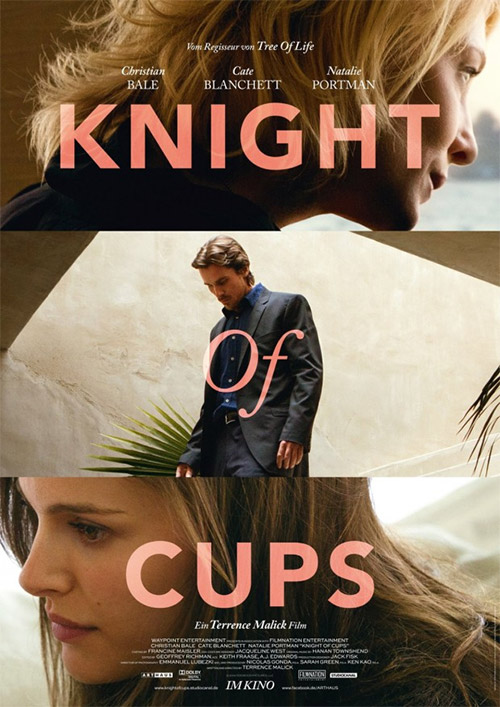 Now, the Terrence Malick drama Knight of Cups that I’ve been waiting for over four years now is getting closer to be released. Well by close I mean within a year, we are talking about Malick after all. A new featurette is just released, including interviews with some of the cast, but no Christian Bale who’s the lead.

Rick (Bale) is a screenwriter living in LA tries to make sense of the strange events occurring around him.

In typical Malick fashion, the movie looks exquisitely-shot, again working with his regular DP, Emmanuel Lubezki. Per IMDb trivia, there was apparently no script and all of the scenes were improvised. Only Malick could get three Oscar winners to do his movie with no script, wow! So does that mean the film would not be eligible for a Best Screenplay award then? Not that I’m suggesting there’s ever a chance it would be nominated. I just think it must be quite an adventure working for this eccentric filmmaker, but hey, it’s got Bale AND Cate Blanchett so I’m still highly anticipating this one. Plus Bale looks so damn hot in this film, ehm 😛

So what are your thoughts on either one of these films?

4. Gotta have a casting news update on FFTF, especially when it concerns the incomparable miss Blanchett! Per Variety, she’s set to play the comedic icon Lucille Ball in a biopic that’s being produced by her two children, Lucie Arnaz and Desi Arnaz Jr. Aaron Sorkin is in talks to pen the script, which will center on Ball’s 20-year marriage to Desi Arnaz. She eloped with the Cuban bandleader in 1940, and the two created the massively successful sitcom “I Love Lucy” — in which she won four Emmys — in 1951 through their Desilu Productions.

I think this is great casting as Blanchett can pretty much tackle any role. They haven’t cast the actor to play Desi yet but I’d LOVE to see Guatemalan-born Oscar Isaac in the role. I think the role should be filled by a Latin actor and I’d love to see Isaac do a comedic role. Plus I think he’d be smokin’ paired up with Blanchett. Both are massively talented actors, so please Hollywood, make it happen! 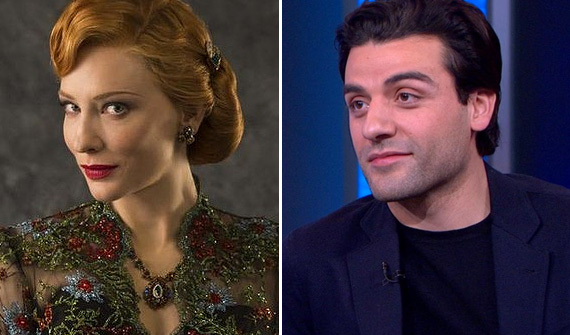 Thoughts on Blanchett’s casting and who should play Desi?

>>>
5. This month’s Five for the Fifth’s guest is Margaret from Cinematic Corner!

Margaret was inspired by the fact that Mad Max: Fury Road finally won something and soon it’s gonna be Oscar season.

Are people going to forget all about the great movies we had in the first 9-10 months of the year? So before the Oscar season starts, I thought it would be fun if everyone shared their line up for Picture and Actor/Actress/Supporting Actor & Actress categories before the big Oscar baits start premiering.

So if the Oscars were to be handed out this month, which film and the four major acting awards would you pick to win?

Well, that’s it for the September 2015 edition of Five for the Fifth, folks. Now, please pick a question out of the five above or better yet, do ‘em all! 😀