At first glance, the film sounds like another commentary on the state of the entertainment industry. But it’s a rarity to see a complex female character at the center of it, and the film benefited from three excellent performances by Juliette Binoche, Kristen Stewart, Chloë Grace Moretz. An unlikely trio to be sure, yet each brings such authenticity to their character and they keep the film grounded despite the sometimes aimless wandering of Olivier Assayas‘ direction.

Binoche plays an international film star Maria Enders who’s at the peak of her career. She reluctantly accepts a role in a revival play, Maloja Snake, that made her famous twenty years earlier. Back then she played the role of Sigrid, a young girl who has an intense but eventually catastrophic with her much older female boss, Helena. Of course this time Maria’s asked to play Helena, which brings some sort of internal crisis as she grapples with the dark themes of the play, as well as the issue of aging and the shift of entertainment landscape in general. The dialog between Binoche and Stewart who plays her dedicated personal assistant Valentine are revelatory and amusing, I enjoy the honesty and frankness of their relationship. Val seems to understand Maria more than she’s given credit for, and despite their sometimes prickly banters, they obviously have a strong bond together. 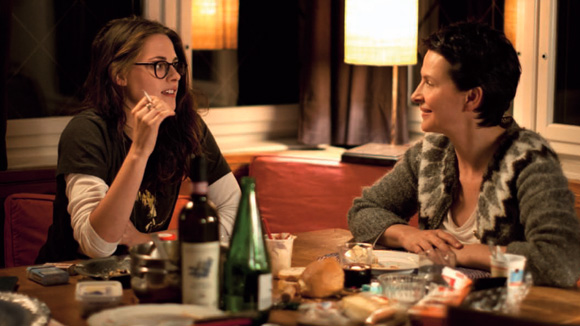 Some have compared the story to Birdman and All About Eve and they do share similar themes, but there’s enough uniqueness in the protagonist’s journey and relationship. Moretz’s character Jo-Ann, a Lindsay-Lohan type starlet who’s talented but self-destructive is fascinating, as you could say that it resembles Stewart who was quite the tabloid fodder during her Twilight years. During a rather hilarious conversation where Val’s trying to convince Maria that there’s more to Jo-Ann and her seemingly shallow sci-fi character, I couldn’t help but think of Stewart herself. This could very well be Stewart’s answer to the naysayers (me included) that she could act, that she’s more than just a ball of nerves who can’t stop fidgeting. I have to say that she succeeded with this role and she earned her groundbreaking César award.

I read on IMDb that the film’s premise was Binoche’s idea, she pitched that to writer/director Olivier Assayas and he wrote a script with the idea. So no wonder Binoche was perfect in the role of Maria and no doubt it’s a character the international film star herself could relate to. Even at 51, she’s still as stunning as her much younger co-stars. There’s a certain self-assuredness as well as raw vulnerability in Maria that Binoche captured perfectly. She’s frustrating at times but never irritating, at least not to me. There are also some humorous moments when she googled Jo-Ann and was shocked/amused by all her shenanigans captured by paparazzi.

The film is shot 35-mm film and it’s simply stunning. It can practically serves as a travel video to the Swiss Alps, especially the resort town St Moritz. The Maloja Snake refers to the thick white low-lying cloud formation that *slithers* its way along the mountainsides and it’s captured beautifully on screen. The classically-tinged score is lovely too, it’s definitely the kind of music I enjoy and it fits the mood and tone of the film well. I’m really glad I saw this on the big screen and it’s become one of my favorites of the year. There are some slow moments and the ending dragged on a bit, but for the most part I was quite engrossed in the story. It’s rare to see such a well-developed, female-centric dramas these days, so kudos to Assayas for writing/directing one that also feels authentic. But the stars truly belong to both Binoche and Stewart, especially the latter who’s able to convince me that she’s an actress worth writing about.

Have you seen Clouds of Sils Maria? Well, what did you think?