In association with Dutch moviepodcasters MovieInsiders (who inspired this blogathon) and Karamel Kinema, who did the stunning logo, Nostra of My Film Views spearheaded The Five Senses blogathon.

Here’s the idea in his own words:

As you know the body has five senses (although some movies might suggest there is a sixth one): Sight, Sound, Taste, Smell and Touch.

So what’s the idea behind this blogathon? For each of these senses you will have to describe the movie related association you have with it. This can be a particular movie or even a scene, but also something having to do with the movie going experience (so for example the smell of popcorn in the theater).

So here are my pick of movies/movie related things I associate with each of the senses?

Despite the lack of original story and other quibbles I have about this film, when it comes to visual effects, it’s tough to beat this one. I remember back in 2009 I got one of those advanced previews dubbed Avatar Day to see this and I was so excited! Seeing Pandora for the first time on the big screen was quite a thrill, but not until I saw the full film that my jaw was on the floor. I remember ooh-aahing during the chopper scene through those flying mountains… the reaction of Jake & his friend pretty much echo how we all felt in the movie theater.

But the most breathtakingly-beautiful scene of all, that remains a visual marvel to this day, has got to be all the night scenes in Pandora…

It’s no surprise this Spielberg film won two Oscars for Best Sound Editing AND Best Sound Mixing. The sound truly made the experience and I’ll never forget the first time the T-Rex made an appearance when the park’s electricity went kaput. Starting with vibrating water scene in the car, the mysterious thumping that gets more and more pronounced… all the way to that first roar. OH MY, that’s quite an adrenaline rush unlike any other.

The sound work in the kitchen scene is incredible as well. It REALLY made you feel as if you’re there with these poor kids! It’s hilarious but terrifying at the same time.

Naturally I pick a scene from a film about food, but I have to pick this under-appreciated one I saw recently. I LOVE breakfast food, especially Omelet, so I could practically taste the yummy-ness of this very scene.

I love Helen Mirren’s expression after she took the first bite, oh man, I was salivating as I was watching this!

I’m such a hopeless romantic. There’s something about hand scenes in period dramas that always gets me. Given how restrictive the customs in those days was, even the smallest physical expression means SO much. I felt a tingle in my own hands whenever I watched each of these scenes…

I’ve mentioned the ‘Mansfield Park’ one in this list, but it bears mentioning again because it’s just such a beautiful & emotional scene. Neither Fanny nor Edmund could speak of how they feel about each other, but a simple touch speaks more than a thousand words…

Of course the finale of ‘Pride & Prejudice’ has to be mentioned here… I love Darcy’s reaction when Lizzie took his hand and kisses it… no words need to be spoken to say how she feels about him.

I have to admit I struggled a bit to come up with this one, but for some reason I kept going back to this. As I was watching the film starring Audrey Tautou, I reminisced on the first perfume I was ever given. My globe-trotting auntie gave me a CHANEL No. 5 mini perfume when I was about 14 and it was the first perfume I ever owned. My late mother was a big CHANEL perfume fan and I still remember quite vividly how much I love the scent. I guess smell is such a sentimental thing, as it could really take you back to a certain time and place. 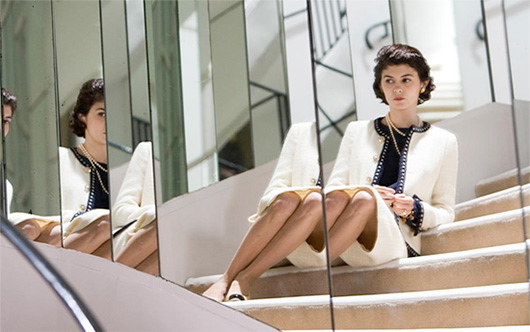 I’ve used many different perfumes since then, but this classic Chanel perfume will always have a special place in my heart. I even dedicated a post for the exquisite Chanel No.5 ads, inspired by the film.

Well, that’s my picks for the Five Senses Blogathon, what do you think?

40 thoughts on “My entry to the Five Senses Blogathon”