Growing up watching Disney fairy tale movies, I have to admit Cinderella wasn’t my favorite heroine. Over the years though, as there are more and more adaptations of this quintessential underdog story (more so than any other Disney “princesses” it seems), the more I appreciate the animated classic. Lately the cinematic trend is reinvention, giving a classic tale a new twist or perspective, such as Snow White & the Huntsman and Maleficent, and so naturally I thought we’d see the same thing with Cinderella. Well, it turns out that this film stayed true to its classic story, you could even say it paid tribute to the animated film, with some surprises thrown in. But by going the conventional route doesn’t mean it’s dull and boring, in fact the opposite is true. There’s something so lively and refreshing about Kenneth Branagh‘s vision that even some of its most sentimental moments aren’t without charm.

Being that it’s the origin story of Cinderella, the movie begins with young Ella whose blissful existence is cut short when her dotting mother suddenly fell ill. Before she passed away, she instilled in her daughter to ‘have courage and be kind,’ a life motto young Ella takes to heart. And so, as life kept coming at her with one terrible blow after another, especially after the arrival of her stepmother and two step-sisters, Ella never gives up hope. I was skeptical at first about Lily James‘ casting in the titular role, but I quickly warmed up to her. There’s a pleasant countenance about her that makes her believable as a benevolent and sweet-tempered girl equipped with inner strength to face the cruelty inflicted upon her by her new *family.* Instead of running away from her problems, she choose to endure.

Ella’s no damsel in distress either. I love how the sweet and swoon-worthy meet-up with the dashing Prince, who refers to himself as Kit to hide his true identity, reveals her independent spirit. “Just because it’s done doesn’t mean it’s what should be done,” she tells Kit in protest of him hunting deer for sport. The prince was immediately smitten by her, perhaps he’s also impressed that she rides her horse without a saddle! Richard Madden effortlessly steals Ella’s heart, and every maiden in the audience, with his impossible good looks and almost indecent sex appeal. As if the filmmakers weren’t sure of that, they had to outfit him in those distractingly tight white pants! I don’t know why they need to digitally enhanced his blue eyes though, I mean he’s already hunky enough with his eyes the way God made ’em!

In any case, I like that he fell for her whilst Ella’s still dressed as a maid, though I actually think she’s the most attractive this way, so fresh-faced and full of life. Unlike the animated version, the Prince also gets a back-story here, and the father/son relationship depiction is quite moving. The Ella-Kit meet-up is my favorite scene of the entire movie! Yes, more so than the entire ball scene or even the transformation scene. In fact, I’m not too fond of Cinderella’s look for the ball — her hair is huge, the ball gown is huge, it’s just overwhelming. Overall there’s more chemistry between her and the Prince in that brief meet-up. 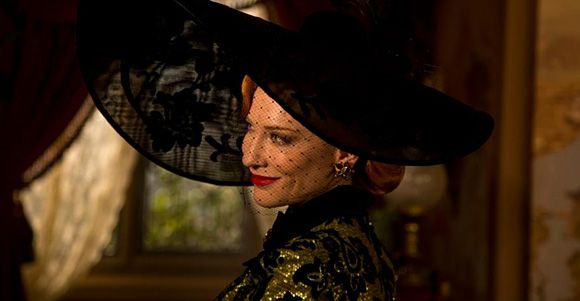 Of course, it wouldn’t be Cinderella without the wicked stepmother and Cate Blanchett is an absolute delight to watch in the role. Looking as stunning and regal as ever, the great Cate was scene stealing all the way through with her elegant icy-ness. The Aussie thespian is obviously having fun with the role, there’s a twinkle in her eye and sense of mischief as she relish in being bad.

Holliday Granger and Sophie McShera are ok as the two vile stepsisters, they’re a bit over the top at times, yet not nearly as memorable as Cate was even when she was standing still. It’s fun seeing Helena Bonham Carter being the comic relief as the fairy godmother and the film’s narrator. Derek Jacobi adds Shakespearean gravitas as the Prince’s ailing father, whilst Ben Chaplin is affecting as Cinderella’s doting father. In attempt to making the cast a little more diverse, Branagh cast Nonso Anozie as Captain (who’s in his previous movie Jack Ryan: Shadow Recruit) and the guests at the ball are racially-diverse. 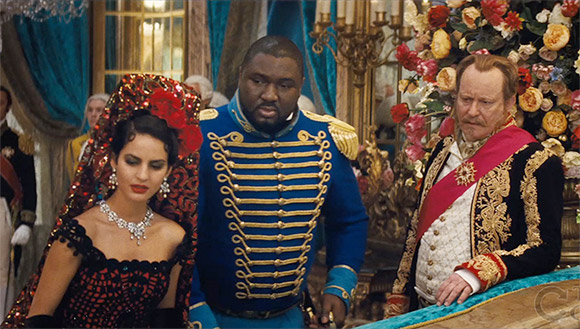 The production design is really something to behold. This is easily one of the best looking movie I’ve seen in a while, and I’m not just talking about the beautiful cast. The costume design by Sandy Powell is simply amazing, especially Cate’s jewel-toned, richly-embroidered dresses, blending 1940s with 19th century style. Everyone’s talking about Cinderella’s gorgeous ball dress – and Lily James’ teeny-tiny waist – but I think Cate’s outfits are equally breathtaking to look at. Oh and those glass slippers… well, that’s fairy tale for ya, the funniest bit was when the fairy godmother say they’d be comfortable, ha! Apparently they’re made of real Swarovski crystals fit only for mannequins. So the scene of Cinderella having those on is made possible by the magic of CGI.

Chris Weitz‘s script might seem simple and conventional, but it’s quite challenging to somehow make the story fresh without making it unnecessarily dark or edgy just for the sake of it. I’ve been a longtime fan of Patrick Doyle‘s gorgeous music and Branagh’s longtime collaborator once again delivered! The music fits the genre perfectly, it has that elegant, sweepingly lush feel to it, but also with a bit of whimsy.

But the biggest kudos has to be given to Kenneth Branagh and his impeccable directing style. He somehow made something *old* feels new again. I think it starts with his vision for the main characters, with an empowered Cinderella who, despite being mistreated, remains true to her moral principles. In this article, “[Branagh] likened it to the nonviolent resistance of Martin Luther King Jr., Nelson Mandela, and Mahatma Gandhi.” Ok so that might’ve been a bit of a stretch, but I get the point. The love story feels richer and more emotionally involving because you believe there’s more than just the obvious physical attraction. Branagh’s quoted in the article as saying, “When you watch this film, you see Cinderella is such an amazing woman. My biggest thing was how do I create a man that is worthy of her?” I came away from the movie thinking that Cinderella rescues the Prince just as much as he rescues her.

I enjoyed this movie so much I just might see it again on the big screen as it’s such a visual treat. But I wouldn’t say it’s style over substance, there’s a nice balance of drama, humor, and even action to please the young and the young-at-heart. Though the movie is infused with such an infectious sense of optimism with its bright, lush colors and lavish set pieces, there are genuine poignant moments to keep it grounded. The scene when Ella receives news of her father’s sudden passing is one of those scenes that made me tear up.

If you’re on the fence about this one, I’d say give it a try. You just might be pleasantly surprised. I think I’d get the Blu-ray as I could see myself enjoying this for years to come.

Have you seen Cinderella? Well, did you like it more or less than I did?