Quick confession: I’m not a huge fan of Oscars red carpet, or red carpet in general. So I only tuned in a half hour before the show. It’s funny but the second I turned on the TV, Michael Keaton was standing next to the chirpy blond presenter. He seems effortlessly at ease, LOVE that guy and I’m so rooting for him to the end! As I did last year, I went to Zumba, had dinner, then went down to my basement.

The way to watch the #Oscars is always in my PJs w/ my laptop. Just set up a standing workstation for live tweeting tonight 😛 #Oscars2015

How did I do on my predictions?

Well, I got 12 out of 17 predictions right. I’m actually surprised to be surprised by the winners, if that make sense at all. I mean, I honestly thought Boyhood would sweep the awards, well at least in Best Director and Best Picture. I haven’t seen the film yet so I’ve been #TeamBirdman from the start. I literally screamed at the top of my lungs [sorry neighbors!] when I heard Iñárritu‘s name called out… I was ecstatic still, I did NOT see Birdman‘s Best Picture win coming …

Firstly, can someone explain what the heck is going on here?? John Travolta is feelin’ frisky tonight eh? Scarlett Johansson‘s post-baby figure is PHENOMENAL! Dayum girl, and that haircut is bad ass!!

These two dresses are my two favorites of the night: 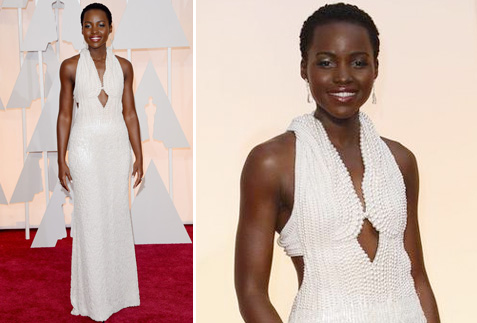 Lupita Nyong’O was my red carpet fave last year too. Wow she’s still the reigning queen of the red carpet with this amazing custom-made pearl gown. YOWZA!! Can’t beat her pearl dress, but it’s her elegant swagger that makes her so dazzling. 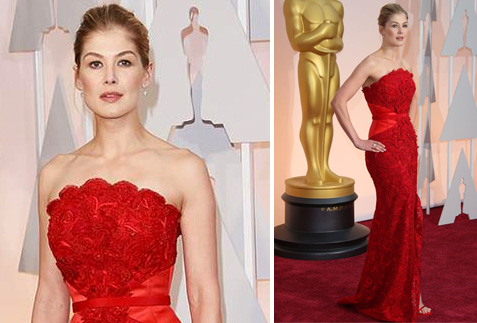 Yet another gorgeous new mom,Rosamund Pike just had a baby back in December!! She’s wearing the color of blood for her first Oscar nomination, how appropriate! She looks absolutely stunning and I LOVE the rose textures all over her gown.

A few other favorites …

Dapper men on the red carpet! 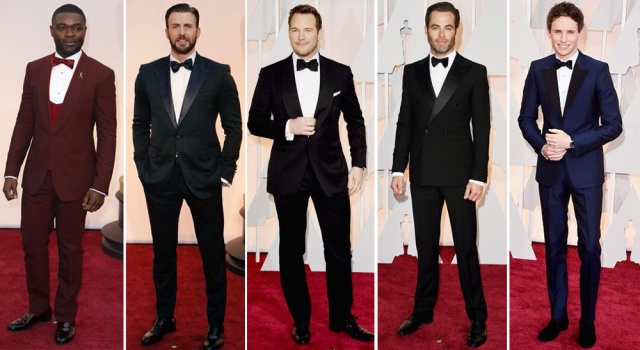 .@PattyArquette can have another award for that speech. pic.twitter.com/bqgJCzKgx6 — Mashable (@mashable) February 23, 2015

“We made a film, black and white, about the need for silence and withdrawal from the world and contemplation, and here we are at this epicenter of noise and all the tension… Life is full of surprises” — Pawel Pawlikowski, director of IDA

By far the funniest speech of the night, can’t blame him for his exuberance. I kind of feel guilty for not having seen IDA yet.

The disclosures that Edward Snowden reveals don’t only expose a threat to our privacy but to our democracy itself,” – Citizenfour’s Lauren Poitras

.@johnlegend moves the crowd to tears with his powerful Oscars speech. pic.twitter.com/UhmNezO1zN

Now, I wasn’t rooting for him but I have to admit I was moved by Eddie Redmayne’s ecstatic and his can’t-believe-I-actually-won reaction when he gripped his Oscar tightly in his hand. I predicted he’d win and I knew that no matter how much I wanted Michael Keaton to win, it just wouldn’t be in the cards. But hey, the dude seems cool about it. I think Eddie wanted to win more badly than anyone else.

Hilarious nod to his pal Alfonso Cuarón who deservedly won last year for Gravity, in case some of you forgot.

“I pray that we can find and build the government that we deserve. And the ones that live in this country, who are part of the latest generation of immigrants in this country, I just pray that they can be treated with the same dignity and respect of the ones who came before and built this incredible immigrant nation.”

What a great come back to Sean Penn’s uncalled for ‘green card’ comment [see below under WORST moments]. Seriously, I thought I couldn’t dislike a guy more, but Penn is relentless in being so unlikable.

The LEGO Movie‘s Everything is Awesome musical number is so exuberantly fun and joyful! Some of the dancers came out carrying the LEGO version of the Oscar statuettes in response to their egregious snub. Take THAT the Academy!

I know people are mocking the standing ovation and people tearing up over that song, but it’s uncalled for. The song is genuinely moving rendition of an important and VERY timely film. It’s a well-deserved win and followed by a defiant speech.

I have no idea what is going on right now… #LadyGaga singing #TheSoundOfMusic & I’m actually liking it #Oscars2015 — FlixChatter (@FlixChatter) February 23, 2015 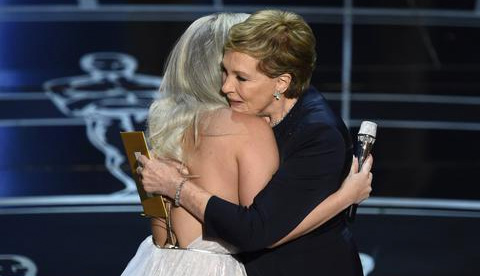 I can’t say I’m a big fan of Lady Gaga so I had no idea she could sing so beautifully! What’s even more beautiful is the Dame herself Julie Andrews coming on stage looking genuinely verklempt over Gaga’s performance and hugged her. LOVE it! 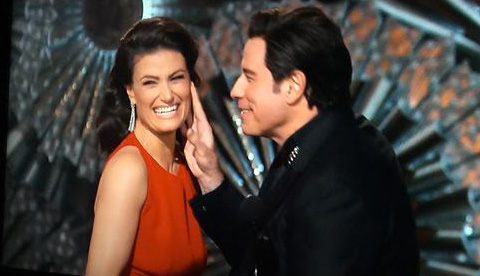 Glom Gazingo! Idina Menzel, aka Adele Dazeem got her revenge on John Travolta. But this hilarious moment is also one of the creepiest. What’s w/ all the face-touching John??

Hands down my favorite moment ever from last night:

So how did NPH do as host?

Can’t say I’m impressed with Neil Patrick Harris. I think I only laughed a couple of times as he seemed so self-aware all night that the joke just seemed off. Even when he showed up in his tighty whities as a spoof to Birdman, it didn’t feel all that spontaneous compared to last year’s pizza delivery thing. I definitely like Ellen more as host, I just think she is funny without trying too hard. Oh and I didn’t care for his subtle-not-so-subtle ‘treason’ jab against Ed Snowden after Citizenfour won Best Documentary.

I did enjoy his ‘Oscar prediction’ bit but I think that’s due to the Oscar writers kind of summarizing the most amusing moments of the night.

Oh and THIS moment with David Oyelowo is pretty cute.

“Now you like him” Mwahahaha!! Good one NPH! #DavidOyelowo does have a fabulous voice! #Oscars2015

Sean Penn making us wait for the final award of the night, Best Picture, only to be followed by a distasteful *joke* about green card, sheesh! Yes I know he worked with Iñárritu on 21 Grams so the two are likely friends, but still, it’s just inappropriate and offensive.

So did you watch the Oscars last night? Thoughts on the winners and what’s your pick of best/worst moments?