This film was supposed to open in the Summer of 2014, but Warner Bros’ delayed it to give more time for post-production work. Heh, clearly they’re far more concerned with all the CGI extravaganza as what the film needed more is a script rewrite. I already had a bad feeling about this even from the unintentionally hilarious trailers. They included the dialog where Channing Tatum said he had more in common with dogs than humans, especially a supposed royalty, to which Mila Kunis replied, “I love dogs, I’ve always loved dogs.” Well, at least they’re consistent as the movie is as dreadful as the promos.

The entire film is a discombobulating and farcical mess, but what’s more baffling is the claim by The Lana Wachowski – as well as several bloggers on Twitter – that this is an *original* sci-fi. Huh?? What originality? The ‘chosen one’ type of plot is rehashed from stuff the Wachowskis themselves have done better with The Matrix, as well as a bunch of other sci-fis. Self-plagiarism isn’t uncommon among filmmakers and I’m fine with it if it actually improves on their previous work.

In any case, the movie opened with the protagonist, Jupiter Jones’ narration about her life story and how she ended up being a cleaning lady in Chicago. Her late dad was an astronomer, hence the name, and a tragic event prompted her family to migrate to America. A lowly beginning to be sure, and she claimed repeatedly how she hated her life. But of course we know that’s not really her *destiny* as in a planet far, far away, three royalty siblings with a name that sounds like some household cleaning product, Abrasax, talk about claiming earth as their own now that their mother’s died. So apparently, their planet consumes earth’s resources in a process called planetary harvest, which basically is an extensive form of genocide in order for the aliens to live forever.

The first act is a long exposition telling us why Jupiter is special and why there are intergalactic bounty hunters as well as an army of weird-looking aliens are after her. But no fret, we’ve got an eyeliner-wearing man-wolf hybrid Caine Wise (Tatum, sporting a goatie & elven ears) with his anti-gravity boots to save the damsel in distress. The action sequences are cool for the first five minutes at best, but it long overstayed its welcome that it became aggravating. Cool visuals can only entertain you for so long when we barely care about the characters and their journey. So apparently Jupiter shares the same DNA sequence as the Abrasax’s late mother and that makes her special as she’s also heir to the throne and could potentially rule earth. 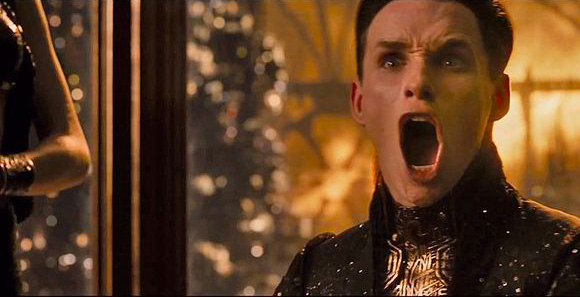 This is a space opera at its most bloated and risible. It’s full of weird-looking space creatures which are humans cross-bred with elephants, alligators, etc. but they all seem to speak with British accent of course. All of them report to Balem (Eddie Redmayne), who should win a Razzie for the most annoyingly over-the-top performance, as an androgynous looking *royalty* could only whisper or scream and nothing in between. Redmayne seems to take this role way too seriously, but all the theatrical antics prompts grimace and laughter every time he’s on screen.

The protagonists fare slightly better, thought that’s not saying much really. I have to hand it to Mila Kunis, she’s not a particularly strong performer but she always comes across genial and earthy. She’s effortlessly likable though she appears mystified for much of the movie. Channing Tatum is pretty much hired for his physical prowess, as he appears shirtless for a good chunk of the time. He has zero chemistry with Kunis and he kind of has this constipated look throughout, perhaps thanks to the mouthpiece he had to wear during filming (per IMDb trivia) Heh, why they put an actor through that if it had absolutely zero purpose for his character arc nor the story as a whole?? 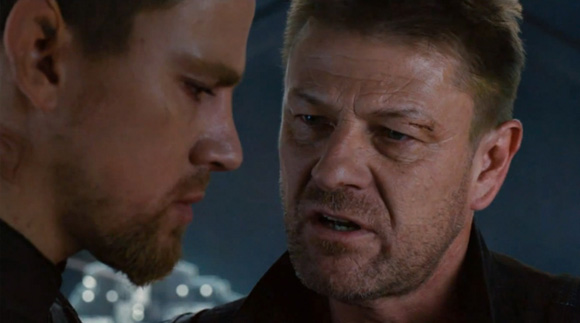 Poor Sean Bean as Tatum’s friend from his military days didn’t have much to do here other than offering more exposition and saying lines like ‘Bees don’t lie.’  Oh brother! I think this tweet pretty much sums up how I feel about his involvement:

@Stanislava28 Nope. That poor bastard actually had to be in the whole movie. I felt so bad for him.

It also pains me to see Gugu Mbatha-Raw as a half human/deer mutation who serves as Balem’s aide. I sure wish Hollywood would recognize talent when they see them. Douglas Booth looks like he could be Redmayne’s prettier younger brother, but both he and Tuppence Middleton who formed the three Abrasax siblings are pretty much fillers. But then again, what can you expect from the supporting characters if the main protagonist doesn’t even have an arc? It may seem like there’s theme of female empowerment here but Jupiter mostly plays a passive role in her own *destiny* [yawn], as she’s whisked away from one strange place to another.

This movie would’ve probably been slightly more palatable if it had a sense of humor. There are several attempts at it, like Jupiter using a sanitary pad to patch Caine’s wound, ewww gross!! The only true comical moment is the whole bureaucracy process Jupiter has to go through, kind of like an administrative immigration procedure if you will, with Terry Gilliam‘s cameo. I didn’t realize it was him until later and I read that it was an homage to his fantasy satire of bureaucratic society, Brazil.

This is the Wachowskis’ third under-performing film in a row after Speed Racer and Cloud Atlas (which I actually quite like). I doubt they could easily get the kind of astronomical budget like this one ($176 mil), as they’d likely struggle to make half of that given the mere $19 mil opening weekend. Heh, no amount of money and crazy CGI-fest can camouflage a terrible story.

Final Thoughts: Yet another style-over-substance sci-fi in the vein of Elysium which also boast some arresting space imagery. The costumes, especially Mila’s dresses, are gorgeous and the design of the planetary universe and spaceships are imaginative, if only they’d invest the same care to the story and characters. It amounts to one big dumb flick, not really a step up from those Transformers movie. Now, some dumb action flicks can still be entertaining but to add insult to injury, this movie is also quite boring, and the bombastic action/chase scenes just dragged on for far too long. I guess this one *lives up* to the reputation of being released in Hollywood’s dump month of February. Suffice to say it’ll likely end up in my worst list of the year.

Well, what are YOUR thoughts about Jupiter Ascending?