Woo hoo! We are already halfway into the film fest… and there are still exciting films to look forward to. Stay tuned for more TCFF coverage here, there’s a dedicated TCFF tab with all the links to articles and reviews.

And here are the reviews from Day 4 …

Part “Big Brother” and part “Manhattan Murder Mystery,” the new movie from independent filmmakers Sophia Takal and Lawrence Michael Levine amiably mix the relationship problems of a group of 30-something New Yorkers with a madcap whodunit. Wild Canaries, which had its world premiere earlier this year at the South by Southwest Film Festival in Austin, is not only written and directed by Levine and produced by Takal but also stars the duo who are married in real life.

Barri (Takal) and Noah (Levine) live with an assorted cast of characters in a Brooklyn apartment building where someone, amateur sleuth Barri suspects, has murdered their elderly neighbor who lived in a rent controlled apartment. The main plot takes awhile to get started and I began to think I was watching a stream of consciousness tale about the trials and tribulations of young people living in the big city. (“Is 8:30 too late?” Barri asks her neighbor while inviting him over for dinner.) 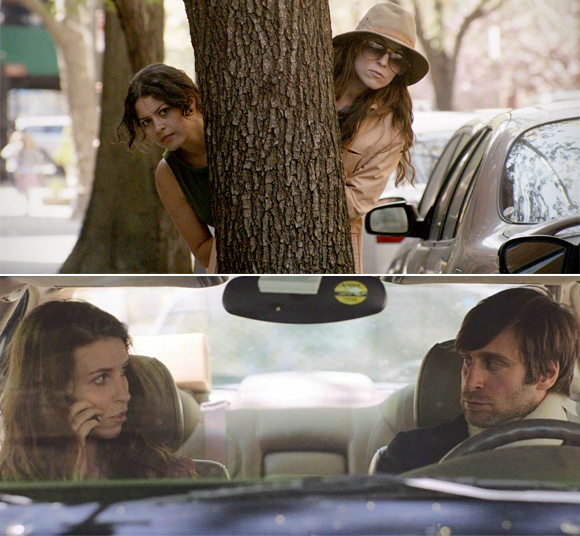 Somehow Levine manages to mix a variety of story lines (a failing movie distribution business he runs with an ex-girlfriend, a neighbor’s fight over their daughter with his ex-wife and Barri and their roommate’s plans to rehab a resort are just a few) with a screwball murder comedy- something that can be tricky to pull off without getting too dark or schmaltzy. They incorporate fun tributes to “Columbo” (in one scene, Barri is running around in a tan trench coat, floppy hat and sunglasses) and New York (in another, Barri opens her neighbor’s door using her Metrocard).

Takal and Levine shine in their roles as the slightly neurotic drama queen and the world weary, put upon husband (“Acting weird is not a crime,” Levine points out after Takal mentions a neighbor’s shady demeanor). I would say they have an easy, natural chemistry (in one scene, Takal scolds Levine while flossing her teeth before bed) but wouldn’t you hope so since they are married?

Levine also incorporates a simple technique some moviemakers forget is important after one has invested 1 ½ hours in your product: he actually tells you what happened at the end. (Yes, I know for some it’s part of their craft to leave an audience guessing… you can disagree with me for preferring a resolution.) Not to say the end is boring – a head spinning explanation in movies such as “Wild Canaries” can also leave you guessing. As Barri and Noah’s roommate Jean (Alia Shawkat) says near the end, “Wow. Some people lead such exciting lives.”

Just Before I Go

This film is the directorial debut from famous actress Courteney Cox. It centers around a man named Ted Morgan, played by Minnesota native Seann William Scott, who wants to kill himself when his wife leaves him for another man. Ted moves back home to reconnect make amends with people from his childhood before he takes his life.

Scott, who’s known for his comedic roles in such films as American Pie, takes on this role very differently and almost seems like a turning point in his careers as we finally get to see a wider range of acting skills. For most of the comedy in this movie he plays a straight man with the people around him having the funny lines and actions. 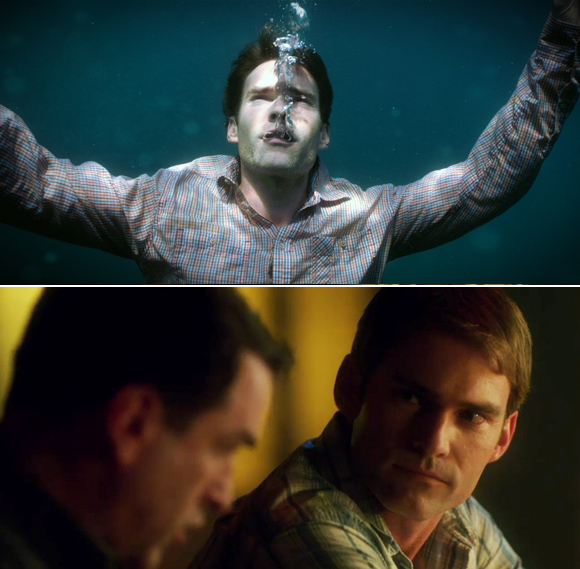 The movie also stars Olivia Thirlby, who plays Greta, who discovers Ted’s plan to off himself and wants to document it and have it be his suicide note. Her character is the voice of the audience as she asks the questions the audience is probably thinking that aren’t addressed in Ted’s narration at the start of the film. Thrilby is great in this film as she is able to balance comedy and heart through her time on screen.

Just Before I Go is about a man wanting commit suicide but it isn’t a movie that makes light of suicide as Ted Morgan isn’t a depressed man he just doesn’t have a reason to live anymore and his journey in this film is about him finding a reason to go on living. So before you decide to skip this film because it is about a man wanting to commit suicide, do realize it really isn’t about that, it is about the people in his life, with very funny moments spread throughout all 95 minutes of it.

A genre-bending romantic comedy, The Young Kieslowski is a quality production, one worthy of full-scale theatrical release. It details Brian Kieslowski’s (Ryan Malagrini) coming of age, both emotional and sexual, during several months of a single year in college. Throughout the film, Brian grapples with his mother’s (Melora Walters, magnificent) pending death, a complicated relationship with love-interest Leslie Mallard (Haley Lu Richardson), Mallard’s unsupportive celebrity father (James Le Gros, even better than Walters), and his own emotional immaturity.

Insofar as he shoulders much of The Young Kieslowski’s emotional weight and an equal dose of its comedy, Brian is a challenging role for Malagrini, but the young actor proves more than capable, especially in the scenes he shares with Richardson. Of course, that has much to do with Malagrini’s co-star; Richardson’s work in The Young Kieslowski is borderline revelatory, especially when one also considers her turn in The Well (where she is equally good). Why? The two characters are very different. Playing both of them requires range, and Richardson proves she has it.

As does The Young Kieslowski’s writer/director Karem Sanga. Here Sanga proves adept at shifting genres. Early, this picture appears to be a teen-sex comedy, but then it rapidly shifts to rom-com, before changing again to be a coming-of-age tale. From there it cycles between the latter two, never straying too far from either, but also never hewing so closely as to be frustratingly predictable.

That isn’t to say the film is perfect. A fantasy sequence during a ‘key lime pie event’ is out of place. Moreover, the project loses a little energy when Mallard is off screen for extended periods.

But The Young Kieslowski, is very good, even borderline excellent, and certainly worth viewing.

One of my favorite parts about film festivals is that I get to see indie gems you otherwise might overlook. The Young Kieslowski is one of those I’m glad I got to see, and I’m certainly glad to be introduced to such talents as Ryan Malgarini and Haley Lu Richardson, the two young stars of the film.

The movie begins with Brian Kieslowski at the dinner table, getting the bird & the bees talk from his mother who’s battling cancer just before he’s off to Cal Tech. Right from the start, you know that this film imbues difficult subjects such as terminal illness and teen pregnancy, with mirth and humor. I immediately sympathize with Brian, Malgarini has such a quirky & likable quality about him that is fun to watch. But the story pretty much starts at a typical college party, where booze and hormone collides, a tricky combo bound to create tricky predicaments. Brian meets Leslie Mallard, obviously drunk even as she professes that she’s going to save herself for marriage. Alas, the two ended up hooking up, and wouldn’t you know it, Leslie gets pregnant… with twins!

The story is nothing groundbreaking, yet writer/director Kerem Sanga presents it makes it seem fresh and delightfully engaging. The scene where Brian finds out about the pregnancy is hilarious, but it wasn’t done in a flippant way as it really made you think about how’d you feel if you were in their shoes. Apparently this topic is a personal one for him, as he and his twin brother were born when their parents were in college. He’s done well with casting young talents like Malgarini and Richardson who made their characters so easy to root for that I was quickly immersed in their journey. Oh and what a journey it was! Of course the toughest part is breaking the news to their parents, and the scenarios are played with humor as well as poignancy. Tough subjects such as abortion isn’t delivered with such heavy-handed or preachy manner, but it’s a natural progression of what both characters have to face and deal with. It seems at first that the subject of faith was to be explored, however, it was dismissed as casually as it was introduced.

I also notice how diverse the cast of The Young Kieslowski was, and the relatively inexperienced actors playing Brian/Leslie’s friends actually did a pretty decent job here. Joshua Malina & Melora Walters as Brian’s parents, as well as Minneapolis-born character actor extraordinaire James Le Gross lend a strong supporting cast. The revelatory star is definitely Haley Lu Richardson, who displays the most range as well as strong screen presence. She definitely has leading lady quality and I hope Hollywood notices her soon. Kudos to Sanga for creating such a delightful, funny and poignant story that teens and adults would enjoy. I appreciate that he’s not afraid to go into some dark moments, such as when Brian trembling at the thought of losing his mother, without having to follow that up with some silly humor. The movie also moves along at a nice pace, and at 94 min, this charming comedy never overstays its welcome.

Check out FlixChatter’s exclusive interview w/ Haley Lu Richardson as she discussed getting her part in her feature film debut in The Well, and tidbits on filming The Young Kieslowski.

Individual tickets are on sale now at twincitiesfilmfest.org

Have you seen any of these films? What did you think?

17 thoughts on “TCFF 2014 Day 4: Wild Canaries, Just Before I Go & double reviews of The Young Kieslowski”