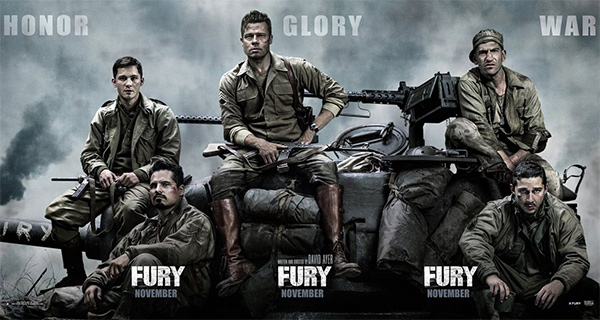 Hollywood loves making films about WWII and to their credit they produced some great ones. In my opinion, Saving Private Ryan and The Thin Red Line were the last great films about this war. And even though I loved Inglorious Basterds, I don’t count it as true WWII film, if you saw it then you know what I mean by that. This latest one from writer/director David Ayer has an A-list leading man and huge budget, but unfortunately it’s just another by-the-numbers war film.

It’s April 1945 and the war is almost over, as the film opens we see an aftermath of a huge battle and the only people left alive were a group of American soldiers inside a tank named Fury. Its commander is Don Collier (Brad Pitt) and his crewmen are not happy with him since one of their teammates was killed in the battle and they blamed him. After some bickering, they head back to their base camp to get their next assignment. A young recruit named Norman (Logan Lerman) introduced himself to Collier and said he was told he’s now under Collier’s command. Upon seeing the young soldier, Collier was not happy but he has no choice but bring Norman on board. After receiving his next mission from his boss Captain Waggoner (the always great Jason Isaacs), Collier and his men set out to take down more Nazis. As the film moves on, it became pretty generic in this genre, we see big battles, body limbs gets torn apart, the young soldier gets picked on by older soldiers and of course they accept him once he proved himself in the battlefield. 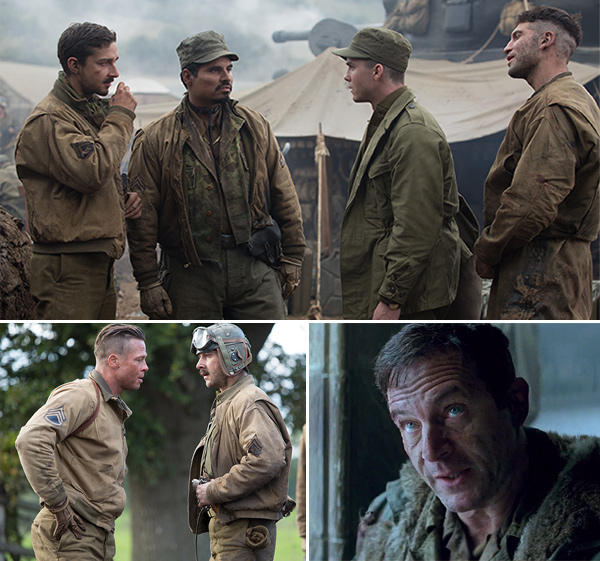 Pitt gave a solid performance as the leader but seeing him in perfect shape and his hair never seem to get messy during the battle scenes really didn’t make his character more believable. When I saw the trailer for this film, I thought he might do another Aldo Raines but thankfully his performance was more grounded than in Tarantino’s flick. The most surprising performance to me was Shia LaBeouf, he’s the man of faith in the group and I thought he was quite good in the role. After seeing him in all those awful Transformers movies, I just couldn’t stand him but here he actually gave a good performance. Unfortunately the rest of the cast members got stuck with clichéd roles. Jon Bernthal is again being cast as the “bad” guy on the team and even though he did a good job, we’ve seen this kind of character many times before. Michael Peña is the token minority character and he’s supposed to be the comic relief guy, in some scenes he’s funny but again we’ve seen this too many times before. Lerman’s Norman is supposed to be the heart and soul of the team since he’s the “innocent” one but he’s not a strong actor so he didn’t really make an impression on me. I think Ayer tried to make his character very similar to that of Charlie Sheen in Platoon but it didn’t work because he’s a supporting character. The film might’ve worked better had it been told from Norman’s perspective and have a better actor in the role. 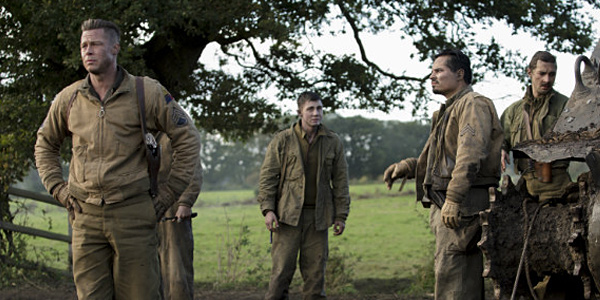 David Ayer has been living off the success of his early writing gigs, he wrote the first Fast & Furious film and later that same year another film he wrote became a success, Training Day. As a director, none of his films were successful and here I think he tried too hard to make a “serious” film. There’s a scene halfway way through the film that totally dragged and I wish he’d left it on the cutting room floor, I think I understood what he’s trying to say with that scene but to me it’s just a waste of time since it never really amount to anything significance later in the story. The battle scenes were well staged but seeing green and red laser beams was kind of weird, I’ve never seen a real gun battle in real life so maybe when guns are fired, they shoot out laser beam like that.

Technically Fury is a success but overall it’s just another run of the mill war film that we’ve seen way too many times before. Maybe with a better script, the film could’ve worked better, but there are so many great films out there about this subject that it’s hard to make anything new.

Have you seen FURY? Well, what did you think?