1. Inspired by my recent viewing of Gone Girl which features yet another collaboration between David Fincher & Trent Reznor, it made me think of other great director/composer partnerships.

Fincher & Reznor have collaborated on Se7en, The Social Network, The Girl with the Dragon Tattoo previously. There are many other similar partnerships that have churned out amazing works: Steven Spielberg & John Williams, Christopher Nolan & Hans Zimmer, Ridley Scott & Hans Zimmer, J.J. Abrams & Michael Giacchino, Peter Jackson & James Horner, just to name a few. Wiki has a list of all director/composer partnerships if you’re curious.

So what’s your favorite director/composer collaborations?
….

2. I just want to highlight a couple of new trailers that came out in the last couple of weeks. The main draw for me for both of these are the filmmakers. Now, first one is Blackhat.

A man is released from prison to help American and Chinese authorities pursue a mysterious cyber criminal. The dangerous search leads them from Chicago to Hong Kong.

Now, I’m most curious to see this mostly because I LOVE Michael Mann‘s work and he’s the kind of director who’d go into great lengths into researching his films. His last film he directed was Public Enemies in 2009, and though it’s my least fave film of his, I’m still hugely anticipating what he’ll tackle next. I wonder if he’s spent the last five years researching about cyber crime, but that doesn’t seem far-fetched to me. The casting of Chris Hemsworth as a hacker is a bit odd, but I’ll give him the benefit of the doubt. I’m a fan of Viola Davis however, and the cast & scenery does have an international flair to it. Btw, did you catch that ‘big hammer’ reference in the trailer? 😉

The other one that really piqued my interest is Paul Thomas Anderson‘s comedy caper Inherent Vice.

…
Confession: I haven’t seen any of PT’s film before. Yes I know, I know, I guess I better get on that. This one might be the first of his movies I’d see on the big screen. It looks like a dark comedy and there are some goofy parts in the trailer, which is interesting as I don’t normally see him directing comedies, but it intrigues me even more. Plus the cast is fantastic, especially Joaquin Phoenix who’s such a chameleon!

Does either one of these trailers pique your interest?
…

3. Now, this is a VERY special topic for me, considering how big of a fan I am of the massively talented Toby Stephens. Not only is he joining Twitter, woo hoo, he’s also making his directorial debut in a short film called In Vitro, hence his Twitter handle. Ahah, his Twitter background photo is hilarious!

As Toby’s described in his own words, In Vitro is a film that subtly explores how infertility can erode a marriage, and what can happen when cold science, replaces passion and a sense of mutual purpose. It’s a subject that’s rarely explored in film, but it’s one that [he] feels needs to be. Sounds like one of my fave British actors, Rupert Penry-Jones, have signed on to be the lead actor! How awesome, as both will be in Black Sails 2 next year!

Toby’s looking to get support via the crowd-funding site Indiegogo, here’s the direct link to his project. I’m so thrilled for him and you can bet I’m one of the contributors! 😉 Check out the video w/ all the details:

Thoughts on this project? I’m also curious which crowd-funding project(s) are you supporting and/or planning to?
….

Chef is the perfect feel-good movie for the weekend, I enjoyed it more than I thought I would. The story is pretty engaging though editing could’ve been much tighter. I think a 90-min film would’ve suffice for a story like this one, and the two Iron Man cast (RDJ & Scarlett Johansson) weren’t given hardly anything to do in their gratuitous cameos. Still, the food stuff are incredible. It certainly made me want to take up more cooking and I wish there’s a Cubano food truck like El Jefe here in town!! Last time I was wiping my drool as I watching was when I saw Julie & Julia and Today’s Special.

What are YOUR fave food movies you’d recommend?
…

5. This month Five for the Fifth’s guest is my pal Melissa from SnapCrackleWatch blog!

Originally we’re going to discuss holiday movies, but let’s table that until November 🙂 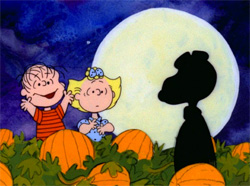 Since it’s October, and a lot of people are excited about Halloween, Melissa was wondering if you have a film tradition, whether it’s horror or otherwise, to celebrate the season. Melissa mentioned the Charlie Browns Pumpkin Special, which is something I’d be far more inclined to watch than any of the horror offerings out there. For those not a fan of scary movies like me, there are some horror-comedies that are fun to watch year after year, like Shaun of the Dead, Beetlejuice, Ghostbusters, The Corpse Bride, etc.

So, do you have a Halloween viewing tradition, if so what is it?

Well, that’s it for the October 2014 edition of Five for the Fifth, folks. Now, please pick a question out of the five above or better yet, do ‘em all! 😀