1. As customary with Five for the Fifth, I’d like to highlight a filmmaker/actor who’s having a birthday today. Well, it so happens that Paddy Considine turns 41 today.

The underrated British actor is perhaps most well-known to mainstream audiences from his brief role in Bourne Ultimatum, remember the Waterloo station scene? I actually first saw Paddy in the excellent 2002 drama In America, as well as in two of the Edgar Wright’s Cornetto trilogy: Hot Fuzz and The World’s End. Aside from being a terrific actor, Considine is also an acclaimed filmmaker. He won a BAFTA for his directing work in Tyrannosaur starring Peter Mullan.

So what’s your favorite film from this talented English actor?
….

2. I haven’t posted a trailer in a while and this one caught my attention from the past week, Escobar: Paradise Lost.

In Colombia, a young surfer meets the woman of his dreams – and then he meets her uncle, Pablo Escobar.

I thought that the casting of Josh Hutcherson as the young surfer is interesting as I’ve only seen him in The Hunger Games so far. Benicio del Toro seems suited to play the mighty powerful Colombian drug kingpin, and he looks quite menacing in the trailer. 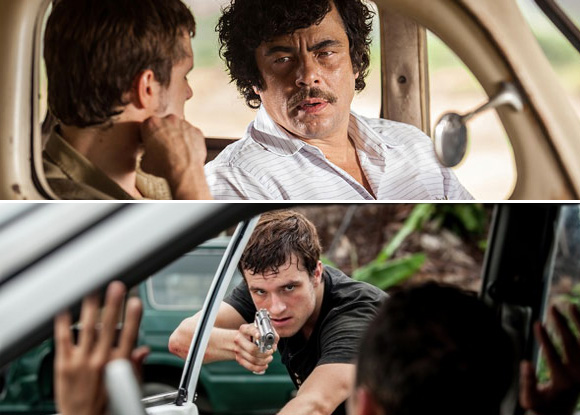 I’ve been meaning to check out this documentary called The Two Escobars that focuses on the lives of two unrelated men who shares the same last name but somehow their lives were inextricably – and fatally – intertwined. Now I’m not sure how historically-accurate Paradise Lost is, other than using Pablo’s character in the story.

Thoughts on this one? Does the trailer pique your interest?
…

3. Most of you are probably familiar with Dan Stevens from his Downton Abbey role as Matthew Crawley. Well, if you google him now, he looks quite different from his Downton days. He apparently lost a lot of weight and had been training extensively to look leaner and athletic. I wasn’t watching the show yet when he reportedly left the show to pursue a Hollywood career, and so far it seems, it’s paid off.

The English actor seems adamant to shed his period drama image as his upcoming roles are pretty bad ass. He’s playing the lead in The Guest as a soldier who introduces himself to the Peterson family, claiming to be a friend of their son who died in action. It’s an R-rated thriller that looks quite sinister. Another film he’s starring that’s also out this month looks to be quite a violent one. This time he’s playing supporting role to Liam Neeson’s A Walk Among the Tombstones, as a Brooklyn drug trafficker  whose wife was murdered.

The actor’s uprooted his family to NYC as well, perhaps to make things easier for his career as Hollywood beckons. Quoted in Daily Mail, he admitted that it was the hardest decision he had to make leaving Downton, but he said ‘I’ve got an appetite to learn new things. It’s nothing more than that.’

So my question to you is, which actor/actress (be it TV or film) would you like to see reinvent themselves in a similar fashion?

4. Ok, now some casting news that’s been circulating the blogosphere this past week. Well, this happens to be a remake of Escape from New York that’s been in development hell for some time, heh perhaps that’s a sign they should’ve left it well enough alone? Reportedly Charlie Hunnam has just been cast as Snake Plissken, a role that Kurt Russell was perhaps best known for.

Apparently Dan Stevens was up for the role as well, interestingly enough. I think Hunnam is better-suited as Plissken though, he’s got more of that devil-may-care grit and bad-assery about him that comes more naturally to him than Stevens. I remember a few years back there were reports that Russell was miffed that the studio was considering Gerry Butler, a Scot, to play an iconic all-American role. Ahah well, this time they gave it to an English actor anyway. Seems that Hunnam’s one busy actor, he’s also working on yet another King Arthur adaptation (directed by Guy Ritchie) with him in the title role.

In any case, here’s the rumored plot for the Escape of New York remake per Firstshowing: Rather than just focusing on Snake Plissken venturing through the prison that is New York, this time the story sees Plissken teaming with “a rogues gallery of criminals who look to leave the island-turned-prison in exchange for the rescue of the captured U.S. President.”

What do you think of this casting news and this remake project in particular?
…

5. This month Five for the Fifth’s guest is my pal Tim from Tim Film Reviews Blog.

So here it is in his own words:

It’s a question I’ve been pondering since the recent release schedule. Most people associate comic-book movies with big budget tentpole Summer movies, but there are actually quite a few small to medium budget movies made well under $100M. Dredd, Kick-Ass, Scott Pilgrim, Blade, Hellboy, etc. just to name a few.

Well, do you think superhero/comic book films should get a big-budget treatment?

Well, that’s it for the September 2014 edition of Five for the Fifth, folks. Now, please pick a question out of the five above or better yet, do ‘em all! 😀