Inspired by the Hitchcock Blogathon hosted by Rob and Zoe, I asked my friend Vince who has contributed several classic posts in the past, including Laura, Vertigo, The Red Shoes, The Omen, etc. to do a write up about his trip to Bodega Bay last year to commemorate Hitchcock’s birthday on August 13.

In the fall of 2013, my wife Kristina, my sons Elliott and Ian, and myself went down to Sonoma County in California to attend my sister’s wedding. While not quite a vacation by any means, we decided to take an extra 2-3 days in the area to check out some beaches as a day treat for the boys. We chose Bodega Bay, partly because it was close (less than an hour away from Santa Rosa), but mostly because of my lifelong fascination with the Hitchcock classic The Birds which was filmed on location there back in 1961.

On the way to the hotel, we drove down Bay Hill Road, which was the road Tippi Hedren’s character (Melanie Daniels) took into Bodega Bay with her Aston Martin. It was a nice windy 2-lane road by hillsides and plateaus. After arriving at the hotel, the friendly clerk nicely answered some questions about the movie and handed us a map of the locations used in the film. It made for easy planning the next couple of days.

On a coffee table in the hotel lobby was a laminated album of production stills from the shoot. Things I learned right away from skimming through it: The schoolteacher, Annie Hayworth’s house was only a facade and torn down after filming; that the Brenner ranch structure no longer existed; and that the Potter Schoolhouse, church, and the Tides Restaurant still stood but have undergone generational makeovers over the decades.

Bodega Bay is a very foggy area and it’s no surprise that this affected the film’s overall look. According to BodegaBay.com, much of the film had to be tinted gray because of this and probably adding to cost and production time. Along with all the special effects employed in the film, it took post three years to put the final touches on it. The movie was released in 1963.

The next day was foggy indeed and we decided to drive a bit on Highway 1 which proved scary and beautiful at the same time. There were steep drop-offs, windy roads and very strong tides along the beaches. We did find a more kid-friendly beach on our way back to Bodega Bay where we spent most of the afternoon. After the beach, we then decided to drive through town looking for some familiar movie locations. With map in hand, we drove up Taylor Street, which is where the children ran down from the schoolhouse as they were being attacked by birds in a pivotal scene. 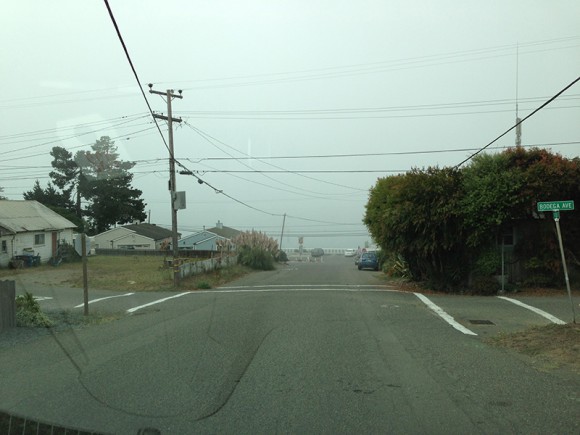 The 3rd and final day, we drove to where the Potter Schoolhouse stood. The structure was intact, although with a slightly newer paint job. Interestingly, because of the fog the day before, we had missed it completely. It was a clear and sunny day which really detached the vibe of the movie – gray and foreboding. 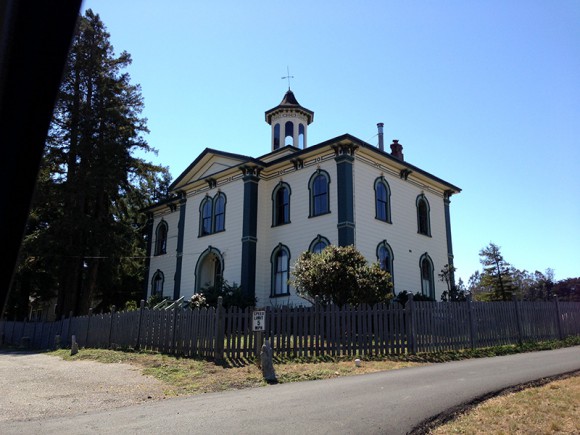 Finally, we reached our final destination, The General Store, where Melanie asks the storekeeper the first name of the ‘little Brenner girl’ in her attempt to play a prank on Mitch Brenner played by Rod Taylor.

The store, now called the Bodega Country Store was a visitor center of sorts, with memorabilia from the film, publicity stills, dolls, toys, postcards, film books etc. The store also was a genuine general store, with canned goods, soft drinks and food. Kristina bought me “Blackie”, a replica of one of the magpies from the movie and has since found its home near my station at work.

The country store also had a replica of the telephone booth in that iconic scene where Melanie is trapped inside it with seagulls crashing into the glass. What a scene that was! Here I am reenacting it – with a stranger’s help in taking the photo. 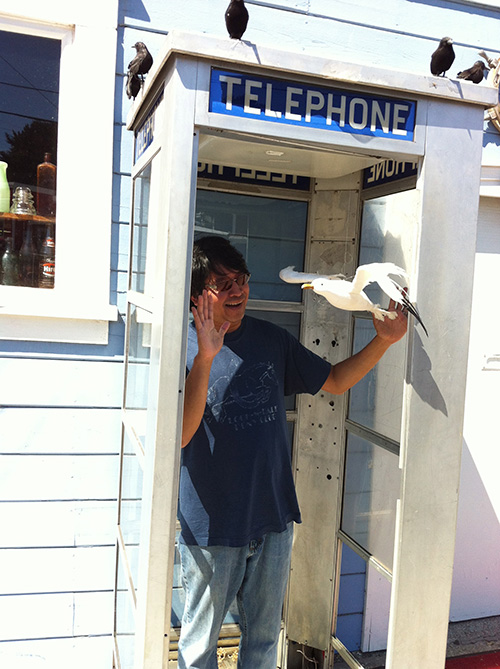 As we were checking out of the Bodega Coast Inn, I was dismayed to find out that just a week ago, Tippi Hedren had come back to visit the town for the film’s 50th anniversary. I had just missed her. The hotel clerk said she was a very nice woman and still beautiful. On the clerks counter was an autographed publicity still of Tippi with Mr. Hitchcock along with a Barbie rendition of her as Melanie.

It didn’t take much to cheer me up though as the town’s charm and the film itself kept my imagination as vivid as ever. If you haven’t seen The Birds I highly recommend it. And while you’re at it, consider visiting this now legendary location.

So have you seen The Birds and/or been to Bodega Bay?