Welcome to another edition of Everyone’s a Critic! Today we’ve got two special reviews from two different genres, one is a Shakespearean modern adaptation, straight from its BERLINALE premiere (thank you Vanessa, you lucky gal!) and the other an Otto Preminger’s acclaimed classic noir (Preminger was nominated for Best Director Oscar for this film). In regards to Coriolanus, you’ve probably read some of the more positive reviews I posted here, but my friend has quite a different impression about it. Anyway, read on:

– by Vanessa Weinert of TheMovieNess

A modern adaptation of William Shakespeare’s play Coriolanus, this film is set in the Rome of today. It is not the beautiful Rome that is usually seen in movies, but rather the run down parts of the city where broken houses are plastered with graffiti. Grain is sparse and “the people” are on the streets protesting. Coriolanus (Ralph Fiennes, who also directed this film) is supposed to be the hero of this city but he despises the people. After long demonstrations, he is banished from Rome and finds refuge with his mortal enemy (Gerard Butler) who he fought with, almost to the death, only months earlier.

It is not surprising that this is one of the lesser known Shakespeare plays. The story is all about war and politics, not people. It is also difficult to get involved with any of the characters: Coriolanus is extremely unlikable, his wife and son are weak and boring, his mother too dominant and controlling and his mortal enemy becomes his close friend without a moments hesitation. This leaves us with “the people” but they are too easily manipulated to be taken seriously.

The mix of the modern setting and the old language didn’t work for me in this movie. I think a total adaptation would have been better. There is a huge focus on media. Cell phones and cameras are constantly seen in shots which seems unnecessary. We get that it’s not 400 B.C. It also felt strange seeing Coriolanus being banished from Rome because that just wouldn’t happen today. 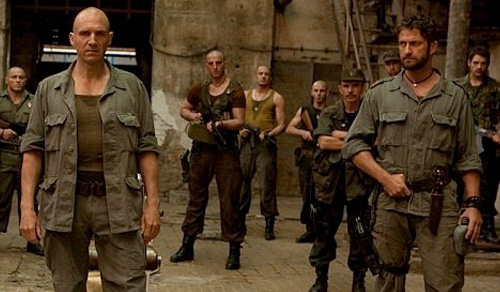 Usually I think Ralph Fiennes is a terrific actor but apparently he needs and outside perspective and directing himself was a bad idea. He is giving a theater performance which just looks over the top and silly on screen. What we end up with are two hours of rage and arrogance, which gets boring pretty quickly. Butler has a surprisingly small role in this movie. He looks amazing (of course) and doesn’t overact like Fiennes does, but he is also in a constant state of fury. Overall there is just too much rage in this film.

With a cast like this it is pretty difficult to make a bad movie but Fiennes unfortunately managed to do so. As much as I wanted to like Coriolanus, it didn’t grab my attention at all. The only reason why anyone should see this movie is Vanessa Redgrave’s performance as Coriolanus’ mother. She brings some beautiful moments into this otherwise dull movie. I am not surprised that plenty of people left the cinema throughout the screening. 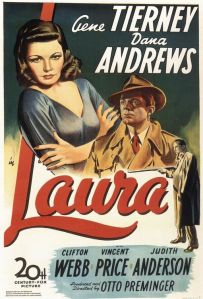 I had recently watched Martin Scorsese’s Shutter Island – with Leonardo DiCaprio (playing a federal marshal) as a somewhat cheap imitation of Dana Andrews’ famous role of detective McPherson down to the faux New England accent and authoritarian scowl. But in sharp contrast to Dicaprio, Andrews could look relaxed even in the tensest of moments (with the help of a little hand held game). While Shutter Island is a respectable technicolor homage to 40s film noir, I couldn’t help but go back to Otto Preminger’s classic whodunit in all it’s black and white glory.

Laura is unique in that it starts off with the title character already dead – murdered in her apartment by an unknown intruder. The film opens with David Raksin’s haunting and memorable score and we see our first glimpse of the beautiful Laura Hunt (played by the stunning Gene Tierney) – 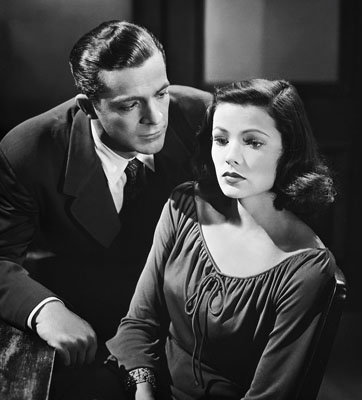 a vanity portrait as the main credits roll. In classic noir fashion, we hear the narration of Waldo Lydecker (Clifton Webb in an Oscar-nominated performance) setting the tone – announcing Laura has just been murdered and he feels to be the “only human being left in New York”. Detective Mark McPherson (Dana Andrews) is investigating the murder with a slight suspicion of everyone within Laura’s circle. This includes fiancée Shelby Carpenter (nicely played by Vincent Price) as the disreputable playboy engaged to Laura.

The film begins to gather steam as Waldo offers McPherson recollections of how he and Laura met. These scenes are shown in vivid but dreamlike flashbacks. We see Laura as a young gentle ad artist, who charms Waldo out of his cruel and arrogant demeanor. In effect, McPherson paints a portrait of Laura in his mind – a beautiful, doe-eyed, naïve girl and begins to fall for her. He obsessively continues the investigation until a bizarre twist turns the whole case upside-down.

In almost Rebecca-like fashion, the charms of the deceased Laura Hunt go way beyond the grave. The difference here is that Preminger leaves nothing to the imagination, instead serving us the picturesque Tierney, who I’m convinced is one of the most beautiful actresses to ever grace the screen. It is Tierney that keeps us involved in the picture and Webb providing its weight and legitimacy with his high-brow, curmudgeon and darkly humorous performance. Andrews is our everyman in this picture – hard-nosed, blue-collar and an outsider, somebody we would hope Laura would fall for in the real world. With that said, DiCaprio’s emulation of McPherson is honorable, but I can’t see Laura Hunt falling for it. Too much color perhaps?

Any thoughts about either or both of these films? Do share ’em below in the comments.