Let me preface this review by saying that Akiva Goldsman should stick to writing screenplays or producing films instead of working behind the camera. In his debut feature, Goldsman’s wearing multiple hat as producer, writer AND director. The film takes place at the turn of the century New York City, where the protagonist, Peter Lake, has a Moses-like beginning. His immigrant parents [Russian?] were denied admission at Ellis Island and his dad set baby Peter adrift in NY harbor in a miniature model ship called City of Justice. Fast forward to about 30-some years and we find Peter (Colin Farrell, sporting an odd looking haircut) being on the run by some Irish gangster led by Pearly Soames (Russell Crowe, trying his best to mimic Farrell’s Irish accent). Miraculously he’s saved by a winged white horse who later doubles as his guardian angel plus transportation. All of this sounds quite enchanting on paper but the plodding pace of this film didn’t exactly stimulate me, but I was hoping the story would pick up soon enough.

The horse then somehow leads Peter to a house where he’d inevitably meets the love of his life. As Peter is a burglar, he’s about about to rob her mansion when the chance encounter happens. It turns out that the beautiful but frail Beverly is dying, but that of course doesn’t get in the way of the two falling in love. Now I don’t know if her disease causes her to speak in some kind of poetic language because that is how she talks in this movie. I quite like Jessica Brown Findlay (Lady Sibyl from Downton Abbey) but the script made it tough to relate to her character and the schmaltzy-ness of it all is starting to get on my nerves. To top it off, I still have no clue what’s the deal with Pearly’s vengeance against Peter, and suddenly he now wants Beverly dead. It’s never fully explained why, but it’s quite obvious that this mission is a personal one for Pearly. He’s even more upset as Peter then snatches Beverly away from his grasp, thanks once again to the winged horse. 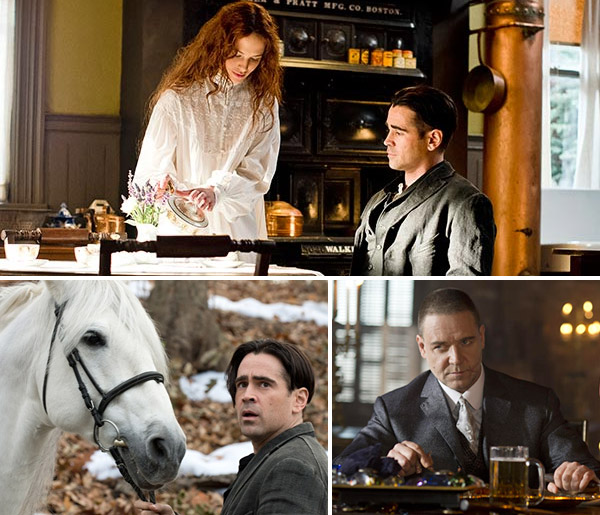 The supernatural elements of the story just gets weirder, not to mention incomprehensible, as we meet Pearly’s boss named Lucifer. Yep, you read that right, the fallen archangel/devil himself, played by Will Smith. It’s quite an odd casting choice but really that’s the least of this film’s problem. So the the lord of ALL evil beings in the universe lives in a dingy tower with only a twin bed and lit by a single lightbulb?? [shrugs] Neither Pearly nor Lucifer are the least bit menacing nor sinister enough to make any real impact, and the whole conversation is so cringe-worthy that my mind kept wandering just how much Crowe and Smith got paid to star in this stinker. Both actors (as well as Jennifer Connelly) have worked with Goldsman before so I wonder if this is some kind of favor they’re doing for him or something. I read somewhere that Goldsman wrote the role of Pearly with Crowe in mind, hmmm not sure that’s a compliment for the Aussie thespian after seeing the film.

Farrell and Findlay did their best to sell their romance and I have to admit there are some touching moments but overall it just wasn’t as gripping than it could’ve been. By the time the film takes place in present day, I’m still barely invested in any of the characters and the story remains a huge mystery to me, and not in a good way. Apparently Peter is immortal as he doesn’t age a day in his life and here he meets a couple of new people, as well as someone from the past, played by Jennifer Connelly and Eva Marie Saint. Despite the A-list ensemble’s (especially Farrell at his most earnest) best efforts to win us over, they’re all wasted here by the cloying and over-sentimental script that drags early and repetitively. The behind-the-scene talents are equally first rate but none of them can really save this film. Hans Zimmer‘s score is pleasant to the ear but it also heighten the lovey-dovey mood of the whole thing. Caleb Deschanel‘s gorgeous cinematography of New York City is quite a feast for the eyes, but it makes my brain desperately ache for something meaty to feast on as well.

The agony is complete with an ending that is utterly predictable and so gratingly mawkish that would make any of Nicholas Sparks’ adaptation seems gritty. There are themes of good versus evil, love, life, loss and redemption here, but the narrative is neither cohesive or compelling. Plus it’s chock full of trite dialog with dreary lines about *destiny* and *everything is connected* mumbo jumbo. It leaves me scratching my head as this comes from the writer of A Beautiful Mind and Cinderella Man, but this mishmash script is perhaps more akin to Batman & Robin which Goldsman also wrote.

Final Thoughts: All the talks about miracles, stars and magical moments amounts to a film that is totally devoid of magic. It’s really a shame as reading the premise of the novel later on (which was altered quite a bit for the film) makes me think that Mark Helprin‘s mythical story deserves so much better. We don’t get enough romance fantasy so I was really hoping this would be a decent enough movie even if it’d probably fall short of Goldsman’s grandiose ambition. Well, I really wasn’t expecting to see one of the worst films I’ve seen in a long time.

What did you think of Winter’s Tale?