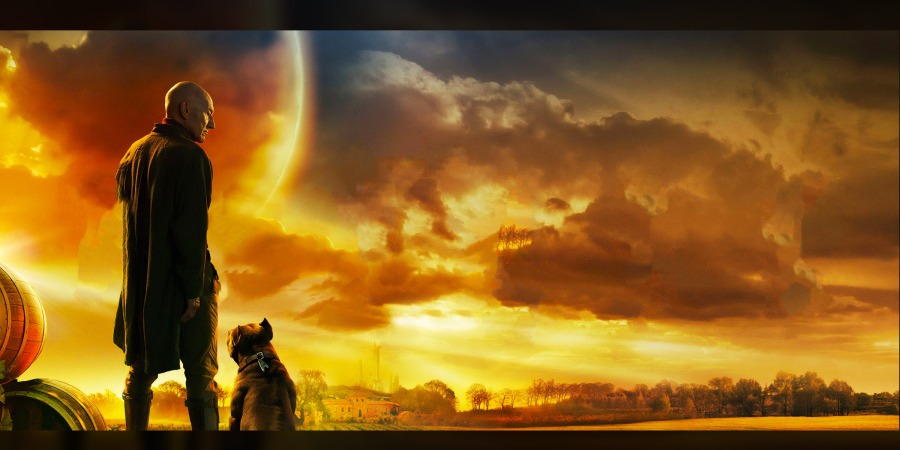 I wouldn’t call myself a Trekkie, in fact, I have not seen any of the TV series, whether the original with Captain Kirk & co, or the later versions with Jean-Luc Picard. I did enjoy latest Star Trek movies by J.J. Abrams starring Chris Pine as Capt. Kirk, but honestly I barely remember them now. Well, thanks to Sir Patrick Stewart, who’s one of the executive producers of the show, he announced via Twitter a month ago that we could watch season 1 FREE on CBS All Access for a month with the code GIFT (which has expired on April 23)

I’ve been curious about this show, so my hubby and I decided to give it a shot. I’m sure glad we did.

Follow-up series to Star Trek: The Next Generation (1987) and Star Trek: Nemesis (2002) that centers on Jean-Luc Picard (Sir Patrick Stewart) in the next chapter of his life.

I have to say I’m hooked immediately and we binged the entire season 1 this weekend. I’m not reviewing this in details, I’m just sharing my general thoughts on the series as a whole.

The show is set in 2399, 18 years after the events of Star Trek: Nemesis (which I haven’t seen but now might watch it because apparently Tom Hardy plays his cloned nemesis!), with Sir Stewart reprising his iconic role, admiral Jean-Luc Picard, now retired and living in his Château Picard vineyard in France. I’ve always been a fan of this distinguished British thespian, and he’s obviously perfect in the role he’s become world famous for. I’m always intrigued by shows/films that take the same character but place them in a different circumstance where they have to navigate the new reality and challenges in a whole new way.

Per IMDb, Stewart cites his previous film Logan (2017) as an influence on the show, pointing out that in both features the characters are still the same but their world has changed and they have to adjust to these changes. He said that film encouraged him to attempt something different with his role.

As the season starts, it’s apparent that Jean-Luc is still deeply affected by the loss of his personal friend, Lieutenant Commander Data (Brent Spiner). Jean-Luc recalled that Data gave his life up to save him upon the destruction of Romulus. That storyline is immediately intriguing to me, especially once a mysterious young woman named Dahj (Isa Briones) shows up, which launches Jean-Luc into the next adventure of his life. It took me a while to warm up to newcomer Briones who plays multiple characters in the show, but she certainly has a unique, almost otherworldly look that’s perfect for those roles.

The United Federation of Planets, the multi-planetary government Jean-Luc was once loyal to, is portrayed in a negative light. I find that as a pretty bold move to drastically change the reality of the Star Trek universe, but it inherently creates dramatic tension for the characters when nothing is no longer how they remembered it. The Romulan refugee crisis, prejudices across races/species, and some of the socio-political scenes depicted in the show certainly has some eerie similarities to what’s going on in the world today. Stewart has been quoted here saying that Picard is him ‘responding to the world of Brexit and Trump.’

Picard is also a reunion story in a way, as the show does reunite the protagonist with some characters from his previous life aboard the USS Enterprise.  In fact, one of my favorite episodes is the one with Commander Will Riker (Jonathan Frakes) who’s now living a peaceful life with his wife, former Starleet member Deanna Troi (Marina Sirtis).

The show took some time to get Jean-Luc back on a ship with a new ragtag crew. Sometimes it feels like the earlier episodes where he rounded up a new crew for his new adventure drag a bit. I have to admit though that the cast work pretty well, and each of them get a decent amount of screen time and backstory. It’s been ages since I saw Santiago Cabrera (who was in Heroes a decade ago) but he’s proven to be a really good character actor. Not only is Rios a dashing captain with a devil-may-care smile a la Han Solo, but he’s got multiple holograms with different personalities (and accents!) that’d show up in certain moments, sometimes against against his own wishes. I think he plays the various holographic personas brilliantly and often provide the show’s comic relief.

The main theme of the show ultimately is about organic species versus artificial lifeforms (or synth). I’m always drawn to shows the struggle of humans vs robots co-existing and forming an unlikely bond, but the way this show explores it is a bit uneven. One of my biggest beef about this show is the Romulan siblings Narek and Narissa, played by Harry Treadaway and Peyton List. I feel like every time they appear, especially together, it takes the fun out of the show with their scheming melodrama. As the main villains of the show, their sheer hatred against AI as they plot to get the Federation to ban the creation of artificial lifeforms, is key to the show. I wish their scenes are more intriguing, but a lot of it is pretty cringe-worthy.

Spoiler alert: [highlight to read] Another character that takes me out of the show is the third character that Isa Briones portrayed, which is the closest incarnation to her ‘father’ Data, so she looks most like him with yellow eyes. Now, somehow her outfit and makeup makes me scream Rihanna! That certainly isn’t what the creators intended but there ya go, I think that’s also one of the weakest parts of the finale.

In fact, the antagonists aren’t particularly strong in this show overall. I mean, Vulcan Commodore Oh (Tamlyn Tomita) came across pretty menacing initially, but in the end the way she’s portrayed was just meh. It’s a pity as I like Tomita as an actress, and she was much more memorable in The Man in The High Castle which I just finished recently. I think the weak adversaries in this show keep it from being truly great.

Fortunately, the show does boast a great cast. Obviously Stewart himself is the best actor on the show by a long shot, but all the returning cast-members from the Star Trek Universe are great to watch. I have to say Jeri Ryan‘s Seven of Nine and Jonathan Del Arco‘s Hugh, both are former Borgs, are particularly memorable.

As a non-Trekkie, this show definitely makes me understand why people have such tremendous love for this franchise. I read that many people loathe the finale, which I think feels too bombastic and crammed with SO much stuff that it’s impossible to resolve everything nicely. Now, die-hard fans probably have issues with that ending concerning Picard’s identity that I won’t spoil it here. I do think the last 10 minutes has some really poignant moments… it marks the end for a central, beloved character in a touching way, but yet feels hopeful instead of morose. The writing of the show, led by Akiva Goldsman, sure has its moments but can also be clunky at times. I guess the same could be said for his career, who could forget the awfulness of Winter’s Tale? [shudder].

Visually the show looks beautiful, despite the DP’s obsession with lens flares, didn’t he get the memo that JJ Abrams got tons of flak (rightly so) for using too much of it on the Star Trek movie and has even apologized for it? Oh and I have to mention the gorgeous score by Jeff Russo, it’s definitely one of my fave parts of the show. I quite like the main title sequence too.

So overall, the show is pretty enjoyable despite its flaws. Once I started watching I couldn’t stop, so to me it’s definitely binge-worthy. I’m glad I decided to watch it while it was available for free (I don’t have cable, so I’d have to pay to see this on CBS All Access). I heard this show’s been renewed, so I’ll be up for watching season 2!

Have you seen Star Trek: Picard? Well, what did YOU think?

12 thoughts on “Star Trek: Picard – Binge-worthy for non-Trekkie like me”