Christmas is always a special time for me. It’s not just another holiday, as there is someone’s birth I am celebrating for His gift to humanity. So as we celebrate the birth of our Lord, it’d be most appropriate to focus on the theme of inspiration. The word itself came from the Latin word inspīrāre which means ‘to breathe upon or breathe life into.

inspire (ɪnˈspaɪə)
— vb
to exert a stimulating or beneficial effect upon (a person); animate or invigorate

Certain films have a power to inspire us, especially those that are based on a real person. Of course Hollywood often takes creative license with the films, but so long as the essence of the story is there, it can still very much inspire us. Note that I’m limiting the list to films from 1980s and up just to help narrow things down.

So without further ado, here are 10 biopics I have seen so far that I find the most inspiring (in alphabetical order):

I saw this a while ago and I wish more people had seen this. This movie’s release coincided with the 200th anniversary of the establishment of the first anti-slave trade bill, ending 400 years of slave trading. The main protagonist, William Wilberforce is a faithful British member of Parliament. Ioan Gruffud is excellent in the title role, conveying the emotional and physical struggles battling illness and one setback after another in the two decades he fought to end slave trading in England.

Along the way, he’s encouraged by his mentor John Newton (portrayed marvelously by Albert Finney), the author of the beloved hymn of the movie’s title, a repentant former slave trader. He’s also helped by his allies, PM William Pitt (Benedict Cumberbatch), a scholarly former slave Olaudah Equiano (Youssou N’Dour), as well as his loving and influential wife, Barbara Spooner (Romola Garai). Though it’s heavy on the history and political aspect, but the redemptive values aren’t lost in the process. It’s one of those rare Hollywood films with a deep passion for goodness and virtue that’s entertaining as well as inspiring. The performances of mostly-British talents, which also includes Ciaran Hinds and Rufus Sewell, are top notch, but ultimately it’s the profound message and inspiring story that makes this a winning feature.

Two British track athletes, one a determined Jew and the other a devout Christian, compete in the 1924 Olympics.

It’s one of those sports biopics that is so much more than the sports itself. Both Harold Abrahams and Eric Liddell are both gifted Olympic-worthy sprinters, but what set them apart is the motivation behind each athlete. Abrahams has something to prove to himself and those around him, and Liddell runs for the glory of God. “I believe God made me for a purpose, but he also made me fast. And when I run I feel His pleasure.” 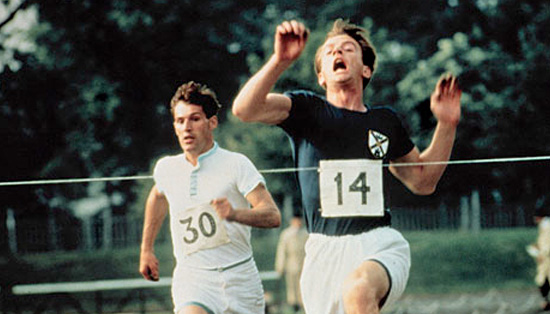 The rivalry between the two isn’t so much about who’s better or more righteous, as both stood for what they believed in. Each of them is motivated by their own personal values and convictions, nary of any political agenda nor hostility, that alone is inspiring. The physical and spiritual conflicts presented here made for a rich human drama with plenty of teachable moments. For one, there is a good message about one’s preoccupation of winning at any cost that ultimately lead to empty victories. Hugh Hudson‘s brilliant direction, David Watkin‘s exquisite cinematography and Vangelis’ powerful score made this film a classic, one that can be passed down from one generation to the next as it’s the kind of timeless stories people of all ages can appreciate.

A working mother puts herself through law school in an effort to represent her brother, who has been wrongfully convicted of murder and has exhausted his chances to appeal his conviction through public defenders.

Just like Amazing Grace, this is another overlooked small-budget-with-big-story that I highly recommend. Featuring two excellent performances by Hillary Swank and Sam Rockwell as Betty Anne and Kenny Waters, I was inspired by Betty Anne’s undeniable love and loyalty for her brother, which leads to her unrelenting quest to get upturn his conviction, even getting a law degree whilst struggling to support her own family.

It’s quite heart-wrenching to see the struggles Betty Anne had to go through, helped only by her sympathetic lawyer friend Abra (Minnie Driver). Coping with one setback after another, yet she kept on hoping and trying even when Kenny himself seemed to have given up. It’s a compelling drama about the power of love that triumphs even in the most difficult circumstances.

The story of J.M. Barrie’s friendship with a family who inspired him to create Peter Pan.

It’s one of those heart-warming stories of unlikely friendships that is beautifully presented on screen. Johnny Depp at his most charming yet understated role and Kate Winslet is lovely as always as the frail Sylvia, but it’s Freddie Highmore who’s quite the scene-stealer.

I was really won over by how life-transforming this friendship was for everyone involved, especially between Mr. Barrie and Sylvia’s youngest son Peter. All the performances are lovely, including supporting turns from Julie Christie and Dustin Hoffman. This film celebrates the gift of imagination and creativity and its emotional healing power.

The true story of Paul Rusesabagina, a hotel manager who housed over a thousand Tutsi refugees during their struggle against the Hutu militia in Rwanda.

One of the hardest films to sit through yet has the best lesson to take away from. Paul was an ordinary man who’d never make himself out to be a hero. Yet the indescribable atrocities around him compelled him not to simply stand in the sidelines. This film shows the worst of humanity, how the world failed the people of Rwanda, but out of all that wickedness and evil, there is always a glimmer of light peeking through. It reminds me of Martin Luther King, Jr.’s famous quote “Darkness cannot drive out darkness: only light can do that,” and that’s exactly what Paul did, which proves that even one person could change the world. 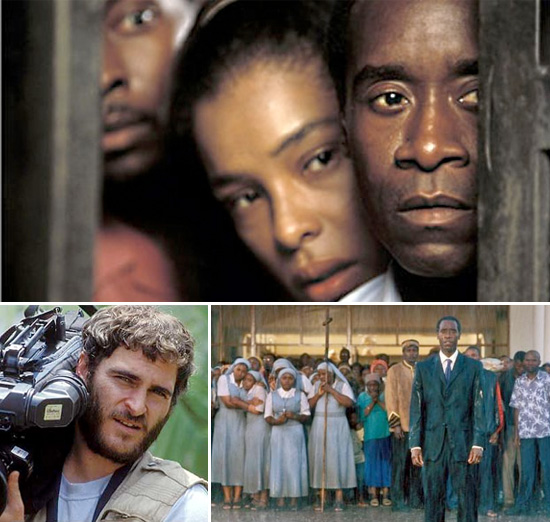 Don Cheadle delivered a remarkably powerful and moving performance and Sophie Okonedo is quite remarkable as Paul’s wife. In a brief role, Joaquin Phoenix as a photojournalist delivered a line that is perhaps the most convicting of all, “I think if people see this footage, they’ll say Oh, my God, that’s horrible. And then they’ll go on eating their dinners.” We definitely are guilty of that, whether we want to admit it or not. Paul Rusesabagina shows us what it means to actually care and not simply shrug things of and say that it’s other people’s problems.

A research chemist comes under personal and professional attack when he decides to appear in a “60 Minutes” expose on Big Tobacco.

Sometimes an ordinary person can be a hero when it’s willing to risk it all for the good of the public. Jeffrey Wigand is a research chemist who makes a good living working for a tobacco company, but yet he risks losing it all, even his own family, when he became a whistle blower exposing the fatal danger of smoking. 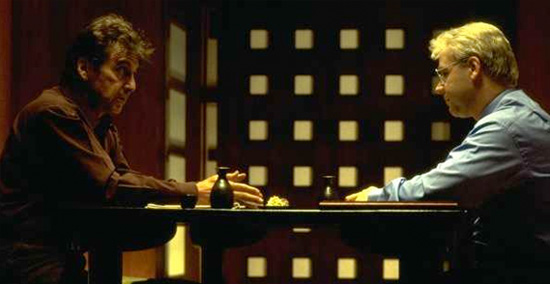 It’s a gripping story that’s full of suspense without a single shootout or car chases. The real beauty is in the script and performances, esp. by Russell Crowe as Wigand and Al Pacino as investigative journalist Lowell Bergman. At the core of the story is a riveting David vs. Goliath story that carries the themes about honesty, loyalty, integrity, as well as what it means to selflessly put others first.

After he becomes a quadriplegic from a paragliding accident, an aristocrat hires a young man from the projects to be his caretaker.

Phillipe and Idris couldn’t be more different from each other in terms of background and social status. Yet the two strike an unlikely friendship that spark a journey to self-healing when they least expect it. What I love most about this film is the honest dialog between the two characters and how Idris never see the paraplegic Phillipe as a ‘lesser’ person because of his condition.

It’s a sincere and incredibly poignant depiction of human relationship that celebrates the human spirit. Though their circumstances perhaps don’t change much in the end, their friendship certainly is life-affirming.

A chronicle of Nelson Mandela’s life journey from his childhood in a rural village through to his inauguration as the first democratically elected president of South Africa.

With the South African leader being laid to rest earlier this month, this film’s timing is unbelievably timely. Yet I believe the story of personal courage and benevolence shall stand the test of time. This is not the first film about Mandela I saw, nor would it be the last, but his life story never fails to move and inspire me.

This film shows the personal toll it took on Mandela for the sake of equality and human rights. “It is an ideal for which I am prepared to die” he declared, and as the film title says, it sure was a long and difficult walk, having to endure 27 years behind bars in Robben Island. He lost his freedom but also his family, not being able to see his wife and kids which ultimately cost his marriage to Winnie. So many things about Mandela are inspiring, but perhaps most of all, is his ability to forgive those who put him in jail. It’s the ultimate manifestation of love,  the love for his people and his nation, that enables him to put aside his own pride and personal vendetta. Now that folks, makes Mandela better than any Hollywood superhero.

In Poland during World War II, Oskar Schindler gradually becomes concerned for his Jewish workforce after witnessing their persecution by the Nazis.

Few films strikes deep to the core of your soul like this one, and John Williams’ exquisite score has a transcendental quality that haunts you for a long time. The quintessential ‘inspiring movie,’ Schindler’s List is considered a masterpiece for a reason. Perhaps the best and most personal work by Steven Spielberg, it’s interesting to note that he didn’t think he could do the story justice.

The story of Irish journalist who exposed some of Dublin’s most powerful crime barons in 1996 and later gunned down by assassins hired by the same criminal drug lords she exposed.

One of the first Cate Blanchett films I saw and I was so deeply moved by it. The Australian actress is absolutely convincing with her Irish accent and truly disappeared into the role of the Irish journalist.

Her single-minded pursuit which endangers her life and her family can be considered reckless, but one can’t help but admire that incredible courage. On top of that, her lack of apathy towards the evil around her is to be commended, as most people would just turn the other way. Guerin’s husband pleaded for her to drop the case yet she refused to succumb to the criminals’ threats that prove to be fatal.

It’s painful to see that time and time again, it takes a tragedy for lawmakers and the power that be to finally wake up and fight the crime they should’ve been fighting for from the start. There are memorable supporting turns from Irish actors Ciarán Hinds, as well as then-unknown Colin Farrell in a cameo role. Director Joel Schumacher is known mostly for his bad films like Batman & Robin, yet his smaller gems like this one sadly got overlooked.

Wishing you all a blessed Christmas! 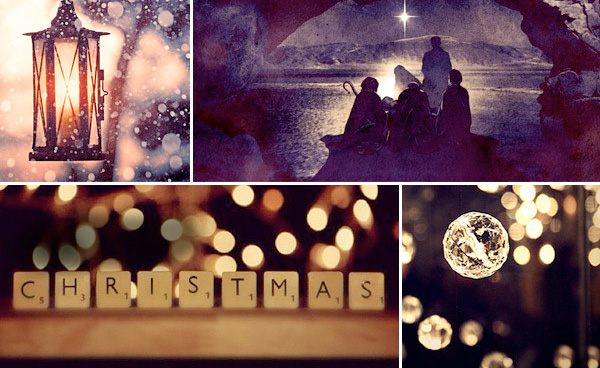 Surely there are more inspiring biopics beyond what’s on this list. What are some of your favorites?