Happy Tuesday! Hope y’all had a great St. Patrick’s Day weekend. Did you see any Irish film? I was thinking of watching Leap Year which takes place in Ireland after seeing Matthew Goode in Stoker, but maybe next time. Well, it ends up being a foreign-cinema weekend for me with two excellent films from France and China, The Intouchables and John Woo’s epic military drama Red Cliff,  on top of more Downton Abbey episodes 🙂

Well, here’s my review of one of one of the films, I shall have Red Cliff review as a rental pick post. 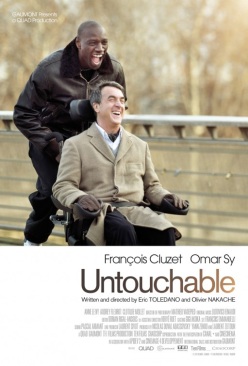 I’ve always loved stories of unlikely friendship. Phillipe is a French aristocrat who becomes a quadriplegic after a paragliding accident. Driss is a troubled French-African young man in need of a job. Their lives could not be more dissimilar, yet somehow, they connected in ways neither one of them could’ve predicted.

The movie begins with an exhilarating car chase with Driss on the wheel of a Maserati Quattroporte, with Phillipe in the passenger seat. In no time the police are behind them, but what happens next set up just how they end up in that situation in the first place.

The moment Driss is hired by Phillipe himself to be his caretaker, the film just grabs me. I love how brutally honest this film is in depicting Phillipe’s handicap, as Driss pulls no punches in his reaction to Phillipe’s condition. It’s not mean-spirited mind you, even if some of the stuff he does to Phillipe definitely raises an eyebrow. Some of the blatantly irreverent scenes are amusing and touching because it’s not done in a gimmickry manner, instead it dares us to look at physical handicap in a different way. Phillipe likes Driss because he doesn’t pity him or look at him as if he’s a lesser human being because he has no movement from his neck-down. In a way, the film asks us not to pity Phillipe either.

I read that some people/reviewers complain about racism in this film and I agree with my friend Keith’s review that the idea is absurd. Yes of course there are racial issues depicted here, but so are social issues and the stark contrast between the posh Paris society and the poverty-stricken suburbs. I’d think anyone who is not an aristocrat would identify with Idris, such as his reaction seeing an Opera for the first time. 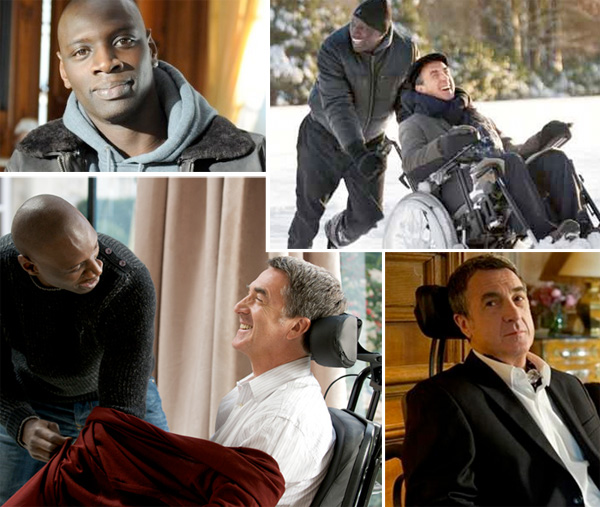 Olivier Nakache and Éric Toledano wrote and directed the film, which is based on a true story of Philippe Pozzo di Borgo, the white, quadriplegic millionaire, and Abdel Sellou, the young ex-con born of African immigrant parents. Based on this Huffington post article, the filmmakers changed Abdel’s Arabic origin to a Senegal-born African because Omar is black, but they essentially share a similar background as French immigrants. I could see that this film is a personal project for the filmmakers and they handled it with care. Both François Cluzet and Omar Sy—as Phillipe and Driss respectively—are wonderful and they have such effortless chemistry. Driss is often impudent, even downright rude, but he has a good heart and he genuinely cares for Philippe. Sy is just so charming you can’t help but being drawn to him. Cluzet reminds me a bit of Dustin Hoffman with his mannerism at times. Portraying a disabled person is inherently tricky, but his careful portrayal is heartfelt and pleasant, without overplaying it.

There are plenty of honest dialog between the two leads that contribute to such a strong character-development. Their journey to self-healing is wonderful to watch. Though their circumstances perhaps don’t change much in the end, their friendship certainly is life-changing.

I love films that celebrates the human spirit and explores the relationship between people of contrasting backgrounds. The Intouchables treads ethnic and socio-economic tensions that may be a hot button issue for some. For me, what makes the film works is the sincere and incredibly moving depiction of human relationship. It helps to have two characters who are so easy to root for. We are emotionally-invested in both men, as well as the people around them.

I’m surprised this film was not nominated for Best Foreign Language at this year’s Oscar. It’s certainly worthy to be included. The script is nary of over-sentimental melodrama that films with this subject matter could easily fall prey to. Instead, it’s full of humorous and heartfelt scenes that makes you laugh and cry throughout. The cinematography is gorgeous too, that paragliding scene just took my breath away. It’s definitely a charming film I don’t mind watching again. Highly recommended.

Thoughts on this movie? What did you see this weekend, anything good?