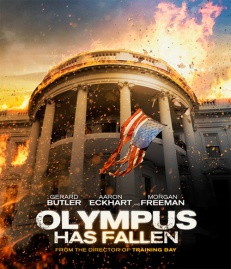 I’m set for an advanced screening of the white house actioner Olympus Has Fallen tomorrow. Surely you’ve seen the pretty aggressive promos of that one all over the place. Interestingly enough, the marketing for the movie has been putting the White House itself as the main STAR of the film. I mean there are some posters that feature the actors, but the white house is always featured prominently on there, as if we’d forget what that iconic POTUS house actually looks like! Now, that’s perhaps saying something about the lead actor of the movie, don’t you think?

Anyway, early reviews I’ve read so far have been surprisingly decent. Of course we shall see come Thursday what the actual RT score would be, but right now it’s sitting at 67%. WOW! Though this movie was on my radar, I didn’t even put this one on my most-anticipated list, as you know how I feel about Gerry Butler these days. It’s amusing that many reviewers are saying that it’s the best Die Hard movie of the year, ahah, take that Bruce Willis! I’m not expecting much, but I can’t imagine this one would be worse than A Good Day to Die Hard, besides I think Antoine Fuqua is a pretty decent director.

Anyway, it made me think of memorable movie scenes set in the White House (regardless of whether it’s actually shot on location or on a made-up set). Then I’ll turn it over to you folks to give me YOUR pick of memorable White House scene. It doesn’t have to be action-related, in fact the idea here is to give and take movie recommendations to fellow cinephiles.

So here are three that came to mind right away:

Pardon the quality of the video, but this is an awesome intro scene in X-Men 2, my favorite of the whole X-Men saga.

Terrence Stamp and one of his most iconic Superman lines, “Kneel Before Zod!” I’m curious how Michael Shannon would fare in that role in Man of Steel!

Of course who could forget this one. I’d say it’s perhaps the most iconic scene involving the White House to date, and ID4 is what Roland Emmerich will always be remembered for.

Now, not all of memorable scenes are about an attack of the White House of course. In fact, I always remember this scene from Clear and Present Danger where Jack Ryan (Harrison Ford) confronted the President. Too bad the clip cuts out the part when Jack defiantly said, “I’m sorry Mr. President. I don’t dance!”

Now your turn folks. Give us your favorite movie(s) and/or movie scenes set in the White House.

57 thoughts on “Question of the Week: What’s your favorite White House movie scene?”