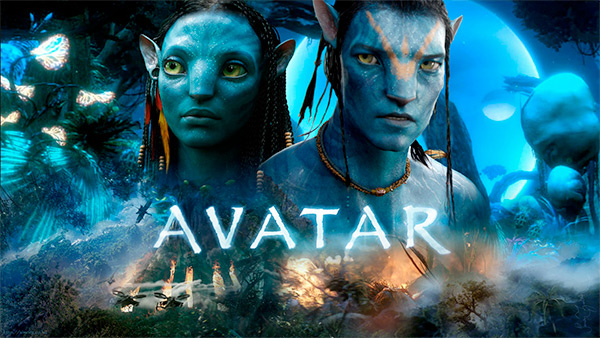 It just dawned on me that it’s been over four years since AVATAR was released. I remember it was quite a big deal back in 2009. I remember getting advanced screenings (this was before I was on the press list, mind you) and I was soooooo excited! I even had a countdown post like I did before Man of Steel came out. I had barely any blog followers back then either, so most of you probably never read my review of the movie. Yes, I actually loved it. Yes I know it’s basically the story of Pocahontas with blue people, but I couldn’t help being caught up in the spectacle of it all. Visually, it was a thrill that at the time, I hadn’t experienced before. My hubby and I even went to the Avatar exhibit at EMP Museum in Seattle, so yeah, I was obviously a fan 😀

But it seems ages ago now. I haven’t even rewatched it in a couple of years though we did get the Blu-ray. It’s not as exhilarating visually when you didn’t see it on 3D or IMAX, and this is one of those movies where the visual does matter. In any case, I sort of have forgotten about this movie, but yesterday I saw a bunch of tweets about Arnold Schwarzenegger possibly joining Avatar 2 as a villain.

“Get to da leonopteryx!” Will Arnie be Avatar 2’s villain? http://t.co/GvN6Y2JARt

I’d think Arnie’s probably playing a general/leader role similar to Stephen Lang. It’s been a while since he collaborated with Cameron in those Terminator movies and True Lies (which I’ve been wanting to rewatch for some time!), though at this point I don’t really care. Heck, I used to actually like Sam Worthington, he was even on my list of 10 Notable Foreign Actors to Watch, but apart from maybe The Debt, I don’t really care for him as an actor anymore. Yeah, blame it on the abominable Clash of the Titans!

What I am curious about is if Avatar 2 would actually take place underwater as was reported early this year. This is what Cameron said to LA Times Hero Complex about what the setting of the sequel,

Part of my focus in the second film is in creating a different environment – a different setting within Pandora. And I’m going to be focusing on the ocean on Pandora, which will be equally rich and diverse and crazy and imaginative, but it just won’t be a rain forest. I’m not saying we won’t see what we’ve already seen; we’ll see more of that as well.

Of course they’d use the latest technology for the motion capture and stuff, that’d be interesting to see how that’d work underwater. The Abyss is one of my favorite sci-fi, which was filmed underwater. Surely the technology has improved tremendously since 1989 that we should expect something even more breathtaking.

So what do you guys think about AVATAR sequels, are you a fan of the first film?

83 thoughts on “Question of the Week: Are you looking forward to AVATAR sequels?”