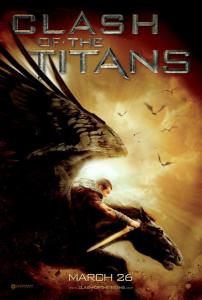 Critics be darned once again! Clash of the Titans defied the dismal review (31% Tomatometer) to soar past $60 million to capture the number 1 box office spot (it’s already earned over 100 mil worldwide). WOW, it surely is kraken-ka-ching for honchos at Warner Bros, as it’ll make up its $125 million production cost quicker than you can say “RELEASE THE KRAKEN!”

My buddies and I saw this in 2D on Saturday afternoon, and glad we only paid 6 bucks for it as it definitely wasn’t worth even a penny more! This is quite disappointing as I’ve been pretty excited about this flick for about a year now, frequently blogging about it, even put it on my Top Ten Most Anticipated 2010 Flicks. Of course I wasn’t expecting an Oscar-caliber flick and knew full well this was going to be a lightweight flick with plenty of action, but still, I was hoping it won’t be THAT vapid and humdrum. 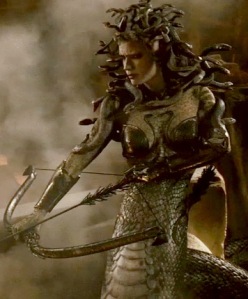 All those visual thrills, loud and bombastic action sequences left me empty, aching for someone, something to actually give a hoot about, but all we get is a reluctant – lackluster is more like it – hero with only two expressions to choose from: anger and despondent, practically nothing in between. Sam Worthington’s performance as Perseus made his Jake Sully character in Avatar look like a worthy Oscar contender! The biggest problem of the movie is definitely the script, so perhaps it’s the fault of the screenwriter to paint such an unsympathetic hero. I mean, if he didn’t seem to give a rat’s ass about fighting the gods (nor saving mankind) in the first place, then why should we?? The only sequence I thought was pretty cool was the Medusa chase and how seamless the special effects was in creating the beautiful but hair-raising (literally!) monster.

If anything though, it certainly sparked a good discussion with my hubby afterwards, we even watched some of the clips of the original on Youtube. So the full review below is courtesy of Ivan, a.k.a Mr. Maramis! 🙂

When it comes to a movie remake – which happens a lot these days with Hollywood’s lack of creativity – you can become a harsher critic, especially when you were quite fond of the original version, no matter how cheesy that movie is (or was). That’s what I experienced when I watched the 2010 Clash of the Titans this past weekend.

I’m not going to elaborate the plot here (that’s what Google is for), but essentially the story centers around Perseus, half man, half god–son of Zeus. The gods have conflict among themselves (that’s what happen when you have more than 1 God), meanwhile human rebels against the gods. Zeus got antsy and eventually decided to RELEASE THE KRAKEN (essentially a humongous godzilla from underwater). Human have the option to either sacrifice Andromeda (a beautiful princess), or kill the Kraken. That’s when Perseus comes in (to kill the Kraken, not to sacrifice Andromeda… just to be clear).

I remember watching the original version as a kid, in awe of the visual effects of all the creatures, Perseus adventure, the occasional humor, and all the action that kept you at the edge of your seat throughout the movie (kid doesn’t really understand storyline, so…). Keep in mind this was all created before CGI era (1981).

Fast forward to 2010. When I saw the trailer, I was so excited. I really had high expectation. After all, with all the technology we have today, fantasy movies like Lord of the Rings can actually be considered as high quality production with excellent story line. Right? And then I saw the movie. 5 minutes, 10 minutes, 15 minutes later… meh. An hour later, I’m getting even antsier than Zeus is. From there on, I was just staring at the screen hoping for some occasional cool CGI, which is not that spectacular anyway.

So by now you know I’m not too crazy about this remake. And maybe I would’ve had a different experience if I had not ever watched the original version. But even when you compare movie like this to the Lord of the Rings series, Chronicles of Narnia or Gladiator, I still feel this movie falls short. I never got attached to any of the characters and the acting were just flat and even felt lazy. Maybe the only character who I could feel empathy for is Perseus’ earth father. And he was only there for 5 minutes (sorry, spoiler).

I mean, c’mon… when Perseus finally found out that he was the son of Zeus, he looked somewhat surprised for like 2 seconds. But then after that, he just looks the same, expressionless throughout the movie. There was this scene before he entered the lair of Medusa (a creature whose hair is made up of snakes, and can turn you into stone if you stare at her eyes), where he supposedly gives a speech of encouragement to a half dozen people who’ve been following him faithfully. And the pep talk didn’t really make you want to root for to good guys even more. Maybe because I didn’t believe the characters relationships are that genuine.

Using Lord of the Rings again as a benchmark: I believed Frodo & Sam friendship is genuine, but not on this one. I believed that the willpower of Sam, Aragorn, and all the people who stand behind Frodo to make sure he fulfills his mission is genuine–but in Clash of the Titans, I feel like the majority of the good guys are just there, waiting for their time to die.

Now switching focus to the superior beings–the gods: Heck the clearly-CGI-ed lion in Narnia looks much more charismatic and omnipotent than Liam Neeson’s Zeus, who looks just like a really confused guy w/ bad makeup and botox, wearing something made out of aluminum paper in high-school science project. Again, in the LOTR, when you first see Rivendell (where the superior race Elves live), you believe that superior beings live there. But Olympus, where Zeus and the other gods hang out, looks like a cheap white gazebo with lots of reflective materials, and a really bad miniature of earth in the middle of it. Seriously, Zeus lives here?

The story of the remake is quite different than that of the original version. Which is fine by me. Obviously the technology used is much better today than the stop-motion technique used back then. When I watch back the original version in YouTube today, I laugh & cringe because of the production quality, Harry Hamlin’s big 80s hairdo, and the inferior editing technology of the old days. But at least I was still curious enough to sit through and follow Perseus’ perilous journey and the dialog – as cheesy as it was  – actually had a plot. It was still entertaining to watch, more than ‘just for old time’s sake’. As for the 2010 version? Let’s just say I’m glad I didn’t pay for the 3D admission fee. I would’ve been even happier if I just waited until it came out in DVD… maybe even in YouTube one day.
…

18 thoughts on “FlixChatter Review: Clash of the Titans”