This post is my contribution to the DEBUTS blogathon spearheaded by Chris (Terry Malloy Pigeon Coop) and Mark (Three Rows Back).

‘Debuts’ will focus on directors’ first features (shorts not included), whether that be some little known feature no-one’s heard of or a breakthrough piece that catapulted them to stardom. We (well, Mark originally) thought it’d be interesting to see how a director’s first feature film compares with the rest of their filmography.

When I first heard about this, I was initially going to do The Usual Suspects as I thought it was Bryan Singer’s debut, but I ended up settling with Ben Affleck’s first film instead, which I think is still the one to top out of the three excellent feature films he’s done. Per IMDb, this is Ben’s directorial debut in a major motion picture, although he did direct two other movies that never made it to the big screen. 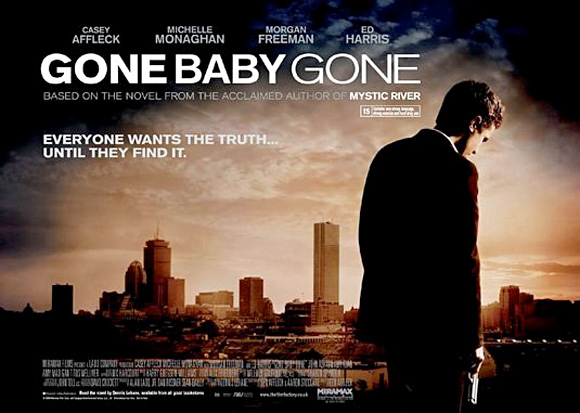 I saw this crime drama/mystery quite a while ago but I remember being quite affected by it. Set in Affleck’s hometown of Boston, starring his kid brother Casey, the story centers on an investigation into a little girl’s kidnapping, which turns out to become a professional and personal crisis for the two detectives involved. Based on the Dennis Lehane novel of the same name (who also wrote Mystic River, Shutter Island), this film has a strong cast that elevate the complex story that gripped me from start to finish.

Casey Affleck, who I think is the better actor of the Affleck brothers, plays private investigator Patrick Kenzie. He opens the story with a monologue as we get a glimpse of the neighborhood where he’s lived his whole life “I’ve always believed it’s the thing you don’t choose that made you who you are…” It’s an effective opening montage that establishes Casey’s character and puts the grim kidnapping scenario into context.

I’m not going to go into the plot as I feel that if you haven’t seen the film, the little you know about this film the better. What I can tell you is that, initially you might think the film is about one thing but slowly but surely, as details unfold, it becomes to be even more devastating that what you think it is. Another missing person case in the second half of the film inexorably shines a light to a darker world of corruption within the force. It’s not something new that we see stories about police corruption, how those who’re sworn to protect us end up betraying that trust, but the way things play out here certainly makes you stop and pause. Despite some hints along the way, the ending managed to still hit me out of left field. It’s such a simple scene but once you see it in context, Casey’s expression in that scene is just so gut-wrenching. In fact, as I re-watched it recently, it hit me how much of an emotional roller coaster this film was.

What makes this a worthy debut?

It’s quite a bold choice for Ben to tackle as his first film, considering the complex, twisty and morally-ambiguous Lehane’s novel is. This film stays with me for quite a long time after the end credits roll. It left me speechless as I pondered, ‘OMG! What would I have done? Would I have chosen to do the right thing? And what is really the RIGHT thing?’ What if the people you consider ‘righteous’ do unthinkable things because they believe they’re doing something for the greater good? Does that justify the act?? Things aren’t always so black and white in our world, and this film certainly made a good case for that.

The way he filmed the underbelly of Boston feels authentic and raw, it’s not the typical glamorous-but-impersonal shot of the city. It turns out that the people in the backgrounds in a lot of the scenes are made of real local Boston actors and members of the local town. Ben made a deliberate choice not to cast professional extras for authenticity and it certainly worked. It’s clearly a personal project for Ben all around, as Gone Baby Gone is also his favorite novel. Now, that doesn’t automatically translates to a good film, but Ben has quite a keen eye behind the camera and he’s certainly has a way with getting great performances out of his actors. I love how layered the characters are, beautifully realized by Casey and the stellar supporting cast, especially Morgan Freeman, Amy Ryan, Michelle Monaghan, and the oh-so-underrated Ed Harris. Ryan was nominated but I think Casey and Harris were both robbed that year IMO.

What I admire about this film, and it’s become a signature of sort in Ben’s direction, is the lengthy dialogue. They can be as thrilling and tense as any action scenes, in this case, the well-written script is fully realized by terrific performances of the cast. The conversation between Casey Affleck and Ed Harris in this clip is a great example, take a look:

Ok, so maybe he hasn’t earned that label yet but he’s certainly a force to be reckoned with as a director. It’s interesting to note that Ben was at a low point in his career a few years before this… starring in forgettable to downright awful films like Paycheck, Jersey Girl, Gigli, Surviving Christmas, etc. He did ok in Hollywoodland but his career wasn’t exactly in the up and up. I think Ben made the right choice in not starring in this film and just focus on his work behind the camera. He did work on the screenplay, which is his first screenwriting credit since his Oscar win with his BFF Matt Damon for Good Will Hunting. 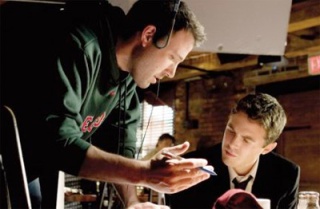 I’ve seen all three of his feature film debuts and all of them are excellent. I think if I were to rate his films I’d go with Gone Baby Gone, ARGO and The Town. Yes, I know ARGO won Best Film at the Oscars last year and I’m good with that, but in the degree of how a film affects me, I think his first film still tops it for me.

That said, Ben’s work does improve over time as he becomes more confident behind the camera, and I like that he still maintains a certain degree of intimacy in the way he shoots his films. They don’t become ‘Hollywood-ized’ for a lack of a better term, as his films are always story and character-driven. I hope he continues that trend in the future. I like how he chose characters who are caught in situations out of their depth, they certainly make for an intriguing protagonists. Though the budget has gone up steadily from the $19 mil he got for this film, his films are still relatively small. The Town was only $37 mil, while ARGO had a $44 mil budget.

It’s interesting that after this film came out, “…[it] was perceived either as a fluke or too dark to make Affleck a candidate for bigger films.” per THR interview. Only Warners executive Jeff Robinov pursued him with absolute conviction despite the lack of financial success. “… Robinov brought me into his office and said: ‘I think you’re a hell of a filmmaker, actor. What do you want to do? Tell us, and we’ll do it.’ And I wasn’t having those meetings with every studio,” He then settled with doing The Town, which ends up earning nearly three times its budget.

I’m looking forward to Ben’s next directorial effort. It’s listed that he’s doing another Dennis Lehane’s adaptation, Live By Night, where he’s going to direct AND star. Not sure what’ll happen to that project now that he’s been contracted to play Batman/Bruce Wayne in multiple films. I do think that Ben will always be a better director than actor, but really, that’s really not a bad place to be in.

So yeah, if you haven’t seen this film yet, I can’t recommend it enough. I think it stands as one of the best directorial debut by a young director. We’ll see if one day Ben Affleck would indeed earn his status as an auteur.

What do you think of Gone Baby Gone and/or Ben Affleck as a director?