One blogger can’t possibly watch every single film, so thanks to two of FC contributors today, I bring you double reviews of two movies currently in theaters. This is The End is actually just been released today. 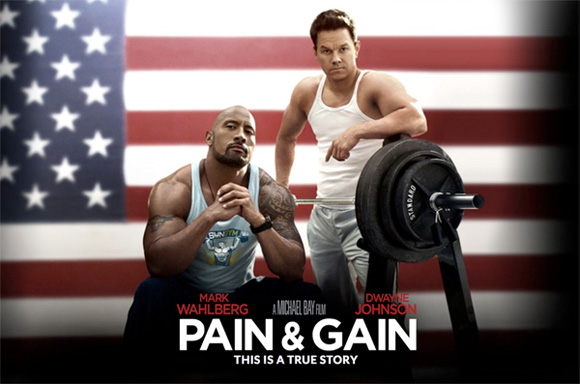 It may be hard to believe when you’re watching the sordid, outrageous crimes that take place in Pain and Gain, but this film is based on a true story. The movie stars Mark Wahlberg and Dwayne Johnson, and it’s about bodybuilders on a crime spree in mid-1990s Miami. Action director Michael Bay helmed this terrible low-budget film, which is more than two hours long and feels much longer.

The movie used as its source material a three-part crime series, written by reporter Pete Collins and published in Miami’s “New Times” newspaper. What happens over the course of the film, in brief, is that a weightlifter named Daniel Lugo, portrayed by Wahlberg, forms the Sun Gym Gang. This murderous group includes the fictional Paul Doyle, played by Johnson, a cocaine addict and religious fundamentalist. This stripper-loving, steroid-fueled gang needs money, and so they decide to kidnap, torture and ultimately murder Victor Kershaw, a local deli owner, and later the head of a telephone sex company and his girlfriend.

What makes these criminals, in real life and in the film, especially shocking is that they hold Kershaw hostage for roughly a month, continually torturing him in order to take control of his financial assets. And what makes the movie puzzling – not to mention offensive – is the approach it takes to the story. Instead of crafting a horrific drama, Christopher Markus and Stephen McFeely, the authors of the screenplay, decided that they would try to create a quasi-comedy. The key word in that last sentence is “try,” because nothing in the movie is remotely funny. Rather, the film is infested with all kinds of crude, sophomoric jokes, including gags about bodily functions and sex toys. As a result, inevitably, several relatives of the real victims in this case have publicly denounced the movie for trivializing events and presenting the killers in a somewhat positive light, and for attempting to get laughs in the process.

In recent years, Mark Wahlberg has proven himself a talented and versatile actor, adept in both comedic and dramatic roles. Think of films as different from one another as Ted (2012), about a grown man with a living teddy bear, and The Fighter (2010), a gripping true-life account of a working-class boxer. That Wahlberg would choose to be in Pain and Gain is truly shocking.

On the other hand, that Michael Bay would direct this garbage is not shocking. He’s best known for loud, witless movies such as the Transformers series. And Bay employs his entire arsenal of headache-inducing tricks throughout this picture, including super-fast edits, spinning camera moves and the objectification of his actresses’ bodies. Indeed, the only real difference between the bodybuilders in “Pain and Gain” and the bad robots in “Transformers” is that, once in a while, the giant robots actually seem kind of realistic. Oh, and the Transformers don’t curse or go to strip clubs.

Author: Eddie D. Shackleford is a writer and blogger for Cable.tv and loves to write about movies, entertainment, TV and more. You can follow Eddie @Eddie20Ford.

This is the End

I have to admit, I’m not a big comedy fan. I rarely seek out comedies at the cinemas, it’s not that I don’t like the genre, I just think some of the comedy films have been either average or just boring within the last few years. I prefer my comedies on TV, I love shows like Parks & Recreation, The League and Arrested Development. But when I saw the trailer for This Is The End, I was kind of excited to see it. A disaster and comedy film with big named stars playing themselves, how can it not be funny.

The film opens with Seth Rogen picking up his friend Jay Baruchel at the airport. They stopped at Rogen’s house, drank alcohol, smoked a lot of weed and then decided to head to James Franco’s house for a party he’s throwing. Once there, they ran into who’s who of young comedians in Hollywood. Even Emma (Hermione) Watson and Rihanna were there partying. Everyone was having a great time except Jay, since he’s not as famous as the other actors at the party, he felt left out. So later he asked Seth to go to a convenient store with him to get some cigarettes. While there Jay said he wanted to leave the party and go hang out at Seth’s place, but Seth wanted to stay. Then suddenly there’s an earthquake and some people inside the store got sucked up to the sky by blue lights and some died; violently I have to say.

They ran back to Franco’s place and told everyone what was happening, of course no one believed them, even Seth started to doubt what he saw. Then the earthquake started again and this time there’s a giant sink hole in Franco’s front lawn, a bunch of people fell into it. So James Franco decided to go back into his house believing it’s safer there. The people who came with him were Jonah Hill, Craig Robinson, Jay Baruchel and Seth Rogen. So most of the film took place inside Franco’s house and the bicker between these actors. Later on in the film, Danny McBride showed up and he and Franco got into a fight about masturbation that will make your stomach hurt from laughing so hard, it’s one of the funniest scenes in the movie. Then later on, a certain big named actor showed up and that also got a huge laugh from the audience.

I didn’t expect the movie to play it so straight, I mean it’s about the end of world and these actors are trying to survive it. I was hoping they would make fun of the movie industry in general, particularly the big budget tent poles that we see every summer. One thing they did do was to insult one another, a constant running gag was how Jay Baruchel is still unknown since he’s not as popular as the other actors within the group. The movie kind of lost me when it started talking about the rapture and then monsters showed up to hunt down the actors. I don’t want give away too much since I think a lot of people might get a kick out of the story.

Performance-wise everyone was pretty good, especially Jay Baruchel who’s basically the lead in the film. I’ve never seen him in anything before this movie and I thought he’s funny and I can see him becoming the new Jim Carrey. Franco, Rogen, McBride, Hill and Robinson were pretty much playing themselves and most of the time it worked.

All in all, this debut feature film by Evan Goldberg (who wrote Pineapple Express, Superbad) is a decent comedy. If you’re a fan of Goldberg’s previous films that he wrote, as well as Shawn of the Dead, you’re going to enjoy this. Just don’t take your young kids or nieces or nephews to see it, the film contains graphic language and violence.

Have you seen either one of these films? Let us know your thoughts below in the comments!

25 thoughts on “Double New Releases Reviews: Pain & Gain and This Is The End”