When I first heard about Baz Luhrmann‘s project to bring F. Scott Fitzgerald’s most famous novel to life, I have to admit I wasn’t too keen on the idea. Then I read that he was going to do the movie in 3D, which prompted an eye-rolling reaction and a shrug. I mean, what could we possibly gain from setting the story in friggin’ 3D?? Heh, as if his style wasn’t over the top enough. But I was willing to give Baz the benefit of the doubt, after all, I adore Moulin Rouge! and to some degree his version of Romeo + Juliet.  I feel that the anachronism and grandiose style worked for both films. Thus, going into this film, the question isn’t whether or not it’ll be style-over-substance, but how much of Baz’s signature style is going to get in the way of this classic story.

I have to preface this review with a confession that I have NOT read the book, so I can’t say whether this is a faithful adaptation or not. I downloaded the preview to my Kindle six months ago with the plan to read it before the movie is out, alas I haven’t got around to it. But many of you who had to read this in high school literature class know the gist:

Set during the roaring 20s, the story centers on the mysterious millionaire Jay Gatsby living in the fictional town of West Egg on prosperous Long Island. Just like the book, the story is told from the point of view of a Midwestern-born Yale grad Nick Carraway who rents a small house next door to Gatsby as he commutes to his job as a bond salesman in NYC. 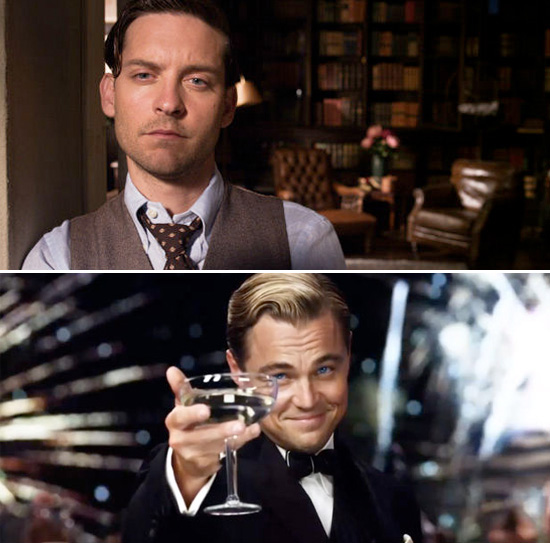 The film starts off stylishly of course, right from the very second the Art Deco frame you’ve seen on all the posters come on screen to reveal the green light at the end of Daisy Buchanan’s house just across from Gatsby’s mansion. For the first 20 min or so, we never see our protagonist, but Mr. Gatsby is featured prominently through Nick’s story to his therapist at the sanitarium that he’s checked himself into. This framing device made me, the audience, feel even more eager to meet Mr. Gatsby, especially to find out just what made Nick so enamored by this character and just what the heck happened that Summer of 1922.

To say the parties at the Gatsby are wildly lavish is a giant understatement. I’ve never seen anything like it, even from Baz himself. Most of the guests aren’t even invited but the booze, confetti and fireworks are never in short supply in this loud and crazy carnival-like soiree. I feel like I was living vicariously though Nick as he tries to wiggle through the crowd to find the elusive host. I quite like the way Gatsby was introduced, as there’s been a pretty effective built-up until that moment. 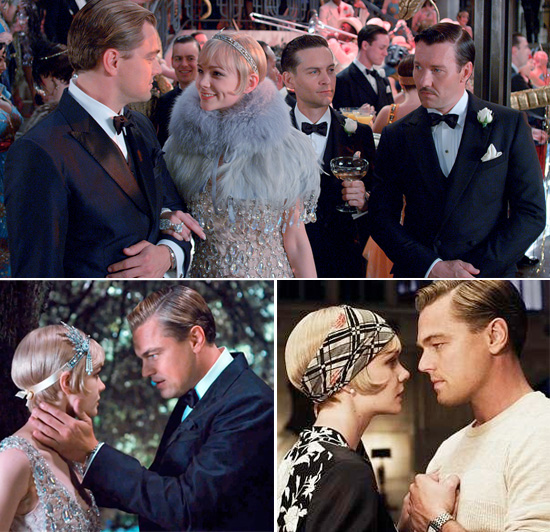 Just like Gatsby’s party, the film has the undeniably power to enthrall and mesmerize with its opulent extravagance, but at the same time it’s so overwhelming and even headache-inducing. I know I expected the ‘more-is-more’ style from Baz, but he seems to have upped the ante with this one. Perhaps Baz is trying to illustrate just how huge a contrast is between the festive and seemingly-blissful exterior of Gatsby’s life with that of his inner turmoil. The bigger the parties, the emptier Gatsby life is. They say money doesn’t buy happiness. Well, it’s never rings truer than in Gatsby’s life.

The quiet(er) moments in this film come few and far in between, but even when they arrive, I still haven’t quite recovered from the dizzying fracas. One of those moments is when Gatsby is with his lost love Daisy, whom he fell for five years ago and the one he’s been trying to win back ever since. Their reunion scene is actually one of the highlights for me just because it’s so hilarious. Perhaps the lightest segment of the whole film, as the film turns progressively darker. That scene is also one of the most revealing of Gatsby’s character, as beneath of that massive success and wealth, he is such a broken man with such a huge insecurity complex and almost paralyzing self-doubt. At the same time, Gatsby is a man of hope, which is something that Nick admires but also cautions him for.

There is a fine line between hope and delusion, and Gatsby hasn’t the faintest clue where to draw it. But it’s obvious that his “hope” is more of an illusion. And so is the romance between him and Daisy. Is he in love with Daisy the woman or the idea of being with her? Unlike the romance in Moulin Rouge! where I really feel the heart-wrenching connection between Christian and Satine, I don’t quite feel that with Gatsby and Daisy. Whether that’s intentional or not I don’t know, but I think that becomes a detriment to the story for me as beneath all that longing look and love-struck poetry, mislaid a beating heart. Therein lies the crux of this film adaptation. Perhaps it’s an inherent problem that is least likely to be overcome by most filmmakers, least of whom Baz Luhrmann.

It’s not entirely vapid however, I actually think the bromance (if you want to even call it that) between Gatsby and Carraway speaks to me more than the doomed romance. Leonardo DiCaprio and Tobey Maguire – who are apparently BFFs in real life – have an effortless chemistry and their mutual fondness and respect is palpable. Which brings me to the performances. The scene of just the two of them in the opulent but desolate Gatsby estate is the most heart-wrenching.

I think DiCaprio is quite convincing as Gatsby, I think he embodies the character well and does what he could with the material given. I can’t help but being reminded of his other roles such as in Titanic, Romeo + Juliet and also as Howard Hughes in The Aviator during one particularly intense scene. I think Leo is a talented actor but not exactly a chameleon. Maguire is perfectly cast as Carraway, he definitely projects that naive, Midwestern sensibility and warmth that’s perfect for the role. Now, Carey Mulligan who has impressed me in other roles is pretty good as Daisy, but she doesn’t quite jump off the screen as I expected. I mean she’s believable as someone Gatsby would fall head over heels in love with, but she just isn’t as memorable here somehow.

On the other hand, Elizabeth Debicki as the amateur golfer Jordan Baker might prove to be the Aussie actress’ breakthrough role. Fellow Aussies Joel Edgerton and Jason Clarke (who were both in Zero Dark Thirty, but the length of screen time is reversed as Clarke has a smaller role here) also turned in memorable supporting turn, as well as yet another Aussie Isla Fisher. It’s inspired casting to have veteran Indian actor Amitabh Bachchan as the Jewish businessman (most likely a kingpin) and gambler Meyer Wolfshiem. He definitely made an impression despite his short screen time.

Visually speaking, this is definitely a feast for the eyes. Baz is no stranger to creating a fantastical escapist entertainment with spectacular set design, beautiful costumes, and cinematography. Baz’s own wife and frequent collaborator Catherine Martin won an Oscar for Best Art Direction for Moulin Rouge! and she might nab some nominations for this one as well. Now despite my initial quibble about the 3D format, this one turns out to be one of the most effective use of 3D since Martin Scorsese’s HUGO. I still don’t think it’s actually necessary but at least Baz was able to do something innovative with it.

Final Thoughts: I was entertained and even enthralled by the visual spectacle and the music (especially Lana Del Rey‘s lush ballad Young & Beautiful), but ultimately, there’s not much emotional depth to really leave its mark. Whatever poignancy and real pathos in Fitzgerald’s novel is dimmed out by all that glitter, leaving the audience wanting more. “Oh, you want too much!” Daisy cried to Gatsby during one particularly heated exchange. Well, I don’t think we are asking too much as the audience to want more than a snack for our soul to go with all that visual feast.

What are your thoughts of The Great Gatsby? Let’s hear it in the comments!